Polish death metallers, VADER (formed in 1983), are one of the very few bands that have managed to weave a web of mystery around them. Very few have survived and kept going strong until today. Theirs is the cult of musical brutality and the urge to succeed. We also remember that VADER were the first band ever from behind “the Iron Curtain” to sign to a Western label.

Recently Metal Shock Finland‘s Tarja Virmakari caught up with Piotr “Peter” Wiwczarek on VADER‘s “Back to the Black 2013” tour (on January 27, at Circolo Colony, in Brescia-Italy), and sat down with him around the table in the tour bus. The main target of this interview was to unveil something more about “The Man Behind VADER”. If we succeeded, it’s up to you to evaluate. Listen to the interview below, in two parts.

Due to some technical issues of the audio recorder, we lost the part where we were talking about the current “Back to the Black 2013” tour. Please find below a brief extract of the lost part:

Peter, You’re now touring Europe on the 1st leg of “Back to the Black 2013” tour, which kicked off in Germany 10 days ago, playing each night in different countries. How has it gone so far?

Yeah, it has gone very well, nearly all the shows so far have been sold out. From the stage we’ve felt the esteem and affection from our fans. It’s a great feeling, indeed! Even if we’ve played every night true massacre shows, followed by many hours in the tour bus, we feel full of tremendous energy and each show has been exciting and different from the others. The atmosphere of the whole tour crew is great which for sure we’ll remember for a long time. We’re really surprised and excited on how well the tour it’s going.

The set list includes all songs from the cult albums “Black To The Blind” and “Sothis”! How does it feel to bring on stage these two gemstones and masterpieces from your past?

It feels great! When time back i proposed Nuclear Blast about bringing these 2 albums on the tour, they agreed right away. For each night we’ve prepared a 70-minutes set (even more with the encores), playing basically songs from “Black To The Blind” and “Sothis”, in raw versions, as in good old times. Some of the songs have never been played live before. The fans have appreciated it a lot, we’ve met an particularly warm reception. We’ve really felt the spirit of the old times on the past shows. With this setlist we want to thank our fans for the continuous support in all these past years.
Tomorrow we’ll have the only day-off on this tour, and then we’ll play in Slovenia, Austria, Germany, Switzerland, France, and then we’ll head to UK for 6 shows, before the tour ends up in the Netherlands, on 10th February. Then in the mid-April will start the second part of the “Back to the Black 2013” tour, which will bring us towards Scandinavian countries, the Balkans, Italy and Spain and several festivals, too. We’ll reveal more details as the tour comes nearer.

The audio came back right after I had asked the question: Tomorrow you’ll have a day-off, how you’re going to spend it? 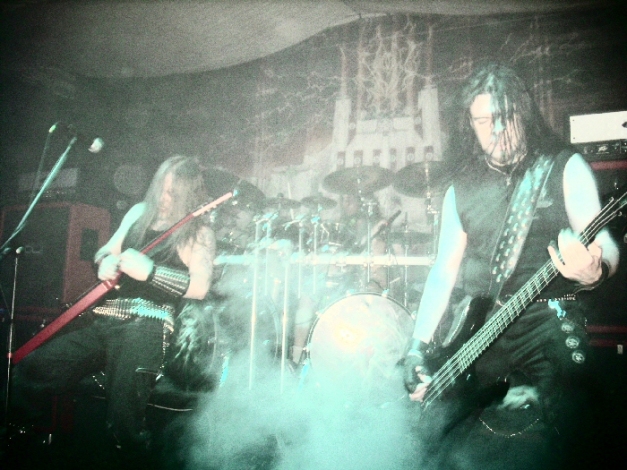 Check out the remaining shows of the 1st leg of the “Back to the Black 2013″ tour:

Recently VADER announced the second part of “Back To The Black Tour 2013” which will kick off in April and go on till the first week of May. VADER will perform on a series of festivals such as Dutch Metal Royal Festival in Aarhus (12.04), Metal Ride Festival in Nancy (13.04), Assymetry Festival in Wroclaw (02.05), Neurotic Festival in Tilburg (03.05) and Bavarian Battle Spring Festival in Rosenheim (04.05). Between 13.04 and 28.04 VADER will host a special guest on tour – MELECHESH – and also support bands.

6 comments on “Interview: Face-To-Face With PIOTR “PETER” WIWCZAREK: The Man Behind VADER (Audio)”