GUS G: Clinic Tour Announced; On The Road All Over Europe Now

While Ozzy Osbourne / Firewind guitarist GUS G. is currently out in the road through Europe together with Kamelot in order to support his second solo release, “Brand New Revolution”, he’s also announcing an additional special run of European clinic dates for October / November.

GUS G. checked as follows: “Hey all! Gus here, checking in from the road. I’ve been out for almost a month now playing all over Europe as special guest of Kamelot – the shows have been great and the response to “Brand New Revolution” is amazing! More good news for my friends in Europe though – I’m continuing this crusade by embarking on my biggest clinic tour ever! It consists of 18 clinics, and these will be very intimate workshops. So whether you’re a guitar fanatic, or just dig the music, come on down to one of these events! Did I mention that the entrance is free?”

Here is a list of all upcoming GUS G. shows, including two special headline shows in Germany with support by Kobra And The Lotus coming up this weekend, as well as the newly announced FREE clinic events:

“Brand New Revolution” entered the sales charts in his native Greece at # 18, in Japan (International artists chart) at # 44, in Belgium at # 69 (Wallonia) and at # 187 (Flemish), additionally reaching the following results in the USA: #22 (New Artist), #87 (Indie Chart) and #37 (Hard Music). The album is available Digipak CD or as 180gr. LP version (On either black or limited coloured vinyl in light-blue / 300 copies or silver / 200 copies) from CM Distro in Europe here: http://smarturl.it/bnrCMDISTRO

The album’s first promotional video-clip, which was shot by longtime visual design partner and director Patric Ullaeus (In Flames, Arch Enemy, Within Temptation, etc.) for the record’s title track, “Brand New Revolution” and which features vocals by Jacob Bunton (Adler, Lynam) can be seen here: http://smarturl.it/bnrvideo

The album’s opening track and only instrumental composition, “The Quest”, is available for streaming here: https://soundcloud.com/centurymedia/gus-g-the-quest-album-track/

And the song “Burn”, which also features vocals by Jacob Bunton (Adler, Lynam), was launched online via a lyric-video here: https://youtu.be/bDf8UwihJlY and here within Germany: http://www.muzu.tv/gus-g/burn-lyric-video-video/2430999/ 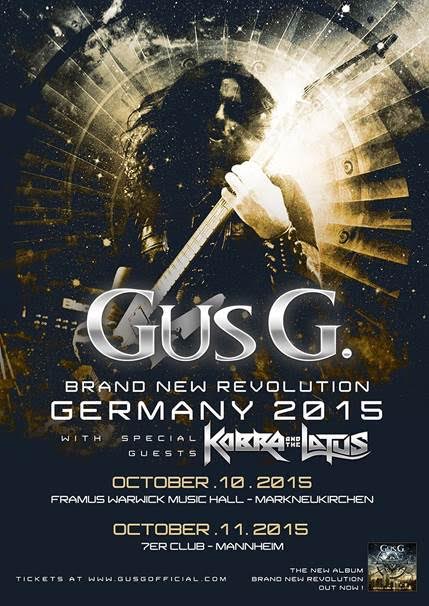