The pioneers of industrial-tinged extreme metal, FEAR FACTORY, will embark on a U.S. headlining tour next month, issues Nuclear Blast. Support on the trek, which will see the band perform its classic second album “Demanufacture” in its entirety, will come from Swedish metallers SOILWORK.

“To me this album sounds not one day older today than it did in 1995,” stated guitarist Dino Cazares, “It’s a metal classic for the ages and I’m excited that we are finally going to be able to perform it live in its entirety + songs from Genexus. Play fearlessly.”

Confirmed dates so far are as follows with many more shows to be announced shortly. For updates check in on http://www.fearfactory.com and http://www.facebook.com/fearfactory. 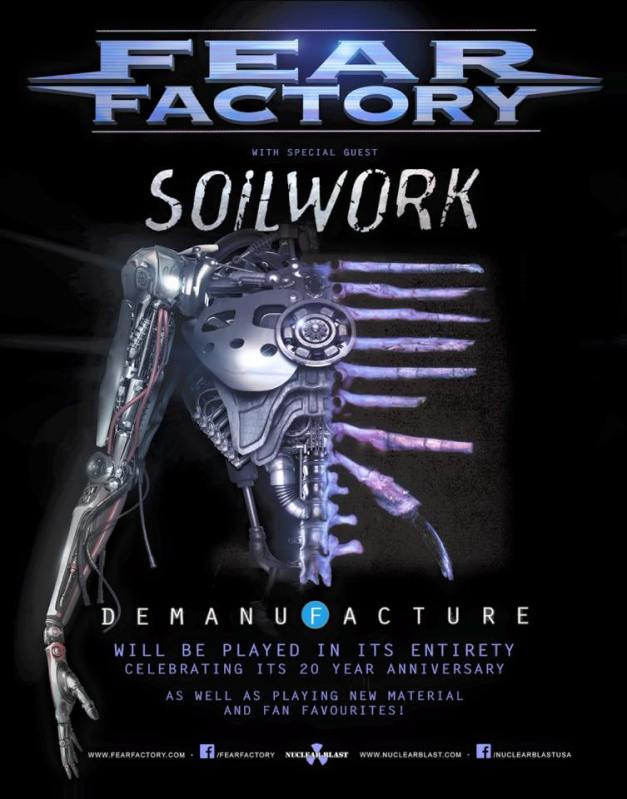 FEAR FACTORY‘s latest masterpiece “Genexus”, was released worldwide recently via Nuclear Blast Entertainment. The album charted in several countries around the globe, coming in at #13 on the World Top 40 Chart, and once again solidifying the band’s stature as an international force! In addition, Genexus has surpassed the band’s last two releases, Mechanize (2010) and The Industrialist (2012), in terms of first-week sales and chart numbers in the United States.

Formed in Los Angeles, California in 1990, FEAR FACTORY changed the world of metal and have become a huge influence on the genre ever since their inception. The band’s unique sound helped bridge the gap between death metal, grindcore, thrash, and industrial on landmark releases like Soul Of A New Machine, Demanufacture, and the gold-selling release, Obsolete.