GOATWHORE Stream New Single, “Mankind Will Have No Mercy”

Posted by tarjavirmakari on June 22, 2017
Posted in: Int. News. Tagged: “Mankind Will Have No Mercy”, Goatwhore, Vengeful Ascension. Leave a comment 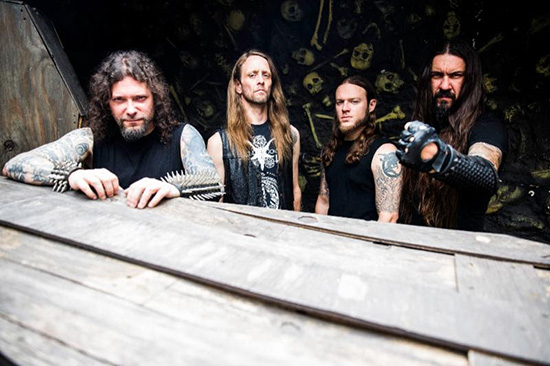 “Mankind Will Have No Mercy” is the latest single from New Orleans metal legion GOATWHORE. The punishing hymn comes by way of the band’s anticipated new full-length, Vengeful Ascension, set for worldwide release this Friday, June 23rd, via Metal Blade Records.

Check out the audio menace of “Mankind Will Have No Mercy” at: metalblade.com/goatwhore – where the record can also be pre-ordered in the following formats:

In a near-perfect 9.5/10 rating, Metal Assault writes, “With their consistent, exclusive, unbridled sound, they leave a lasting impression… they prove just honest, pure heavy metal can still be a thing. It’s bands like this that give hope and power to the metal scene. This album is inspiring and one to put on repeat.” Heavy Blog Is Heavy concurs, “Goatwhore have eclipsed their previous work by creating an expansive and involving album that is as heavy as it is musically diverse and unusually catchy.” While Team Rock calls it, “…the most mature recording in the Goatwhore canon,” furthering, “Its combination of disparate subgenres from opposite ends of the structural and melodic continuum is masterful, resulting in a remarkably non-contrasting display of good and evil; that being good songs that sound as evil as all hell.”

Elsewhere the sentiment echoes. Metal Wani hails another, “perfectly-sculpted Goatwhore masterpiece of raw aggressiveness and the band’s classic instrumentals.” New Noise Magazine gushes, “‘Vengeful Ascension‘ is Goatwhore‘s most diverse and interesting work to-date. The band proves that they can do more than just shred away from beginning to end, but build upon their foundation to introduce deeper chemistry…The record is one of those works that taps into the vein of human existence, and unleashes it in devastating heavy metal fashion.” Metal Insider notes, “There’s no filler here. It’s fast, sometimes slow, painfully brutal yet also restrained where needed… Their live show proves to everyone that these guys are for real and there’s no dependency on pro-tools and gimmicks. They record ‘track to tape’ so any fakery is thrown out the window. It’s like the opposite of Instagram. It’s pure sweat equity with these guys year after year and it pays off.”

A sonic manifestation of war, chaos, desolation, and emotional conflict, seamlessly bridging twenty years of the band’s signature brand of audio venom, Vengeful Ascension finds its members at their most accomplished – both individually and as a cohesive unit. Guitarist Sammy Duet’s dense, sub nuclear riff work and possessed solo blitzes are at their most devastating, spiraling flawlessly and instinctually around drummer Zack Simmons’ and bassist James Harvey’s hammering rhythms with front-man Ben Falgoust’s distinctly commanding roar, his acidic prose more enunciated than ever before, complimenting the apocalyptic proceedings.