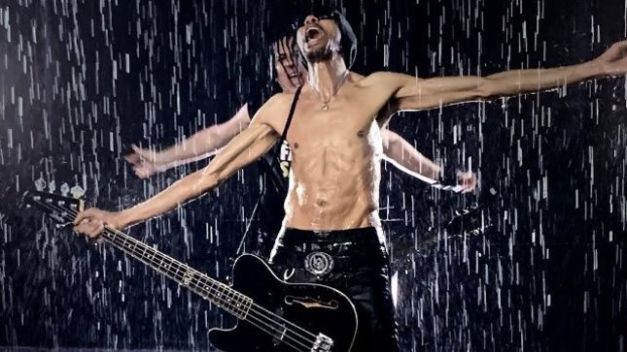 This is the first song to be previewed from the soon-to-be-released album ‘Beauty Re-Envisioned’, which will contain an extremely wide variety of remixes and alternate versions of many of the tracks that appear on their debut album ‘Finding Beauty in Chaos’. Both albums are produced by Ministry‘s Grammy-nominated producer Michael Rozon at Ciravolo’s own SAINTinLA Studio.

This track breaks the constraints placed on the debut album, not only due to the addition of synthesizers, but also in the wicked unleashing of blistering guitar solo by guitar guru Zakk Wylde. “Zakk plays more notes on this solo than I did on the entire album, but with taste, technique and a ton of flair,” Michael Ciravolo laughs.

For this project, Ciravolo – a New Orleans native – teamed up with King’s X’s dUg Pinnick, who previously lived in Houston, sharing experiences and memories of the chaos caused by Hurricanes Katrina and Harvey. Additionally discussing the ‘beauty’ of those who came to help the victims, profoundly shaped the song’s music and lyrics.

“When Michael sent me the music and asked me if I would sing and play on it, I immediately said yes. I think it rocks!! And some deep lyrics were my thoughts. Since I come from Katy Texas, where it flooded a few years ago very badly and, not very far away, it was the same for New Orleans, I thought it was appropriate to sing about the un-natural disasters that are happening due to man’s ignorance,” says dUg Pinnick. “It was fun putting my bass part on the track and a big surprise being on the same song with Ice-T and Zakk Wylde. What a great opportunity, I’m glad to be a part of this project. And the video shoot was wet!! Lol! And so much fun… and even captures the serious topic of this song.”

Ice-T, famed rapper, actor and front-man of Body Count, also spits out a poignant exclamation point to the extent of these tragedies. “This song really hits close to home as I was born and raised in New Orleans. I lived in Los Angeles when Katrina hit, but watched as friends and family lost everything. My elderly Aunt was evacuated as the city’s services shut down, and sadly she did not survive the move to Alabama. She along with at least 1200 others lost their lives as a result of this devastating hurricane,” says Michael Ciravolo.

Vicente Cordero, who directed the accompanying video, also directed the three previous Beauty In Chaos videos, delivers a visually stunning interpretation of this song. Production credit for all four goes to Industrialism Films.

Originally from New Orleans and now based in LA, Michael Ciravolo has played guitar in Human Drama for the past 30 years, most recently on ‘Broken Songs for Broken People’ (2017). Perhaps best known as President of Schecter Guitar Research, he has also played live and recorded with Michael Aston’s Gene Loves Jezebel since 1998.

On June 21, ‘Beauty Re-Envisioned’ will be released via LA-based label 33.3 Music Collective on deluxe CD and limited-edition heavy-weight colored vinyl. It will also be available digitally across online stores, including iTunes, and streaming platforms like Spotify. CDs and vinyl can be ordered from the Beauty in Chaos website at https://www.beautyinchaosmusic.com/music-store.