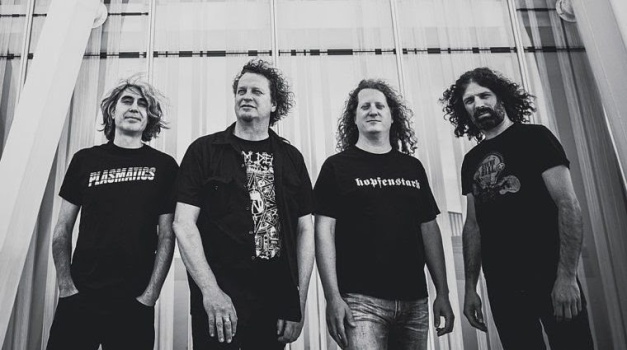 Jimmy Kay from Canada The Metal Voice spoke to VOIVOD‘s guitarist Dan ‘Chewy’ Mongrain on April 16 2020 via Zoom video. In this in depth interview Chewy  spoke about the bands upcoming live album, the progress on an upcoming studio album plus how he joined Voivod and answered fan questions.

Some experts from the video interview

Tell me about the upcoming Live Album by Voivod
“There is a live album coming soon. The live album was recorded at one show. We wanted it to be based on a few shows and we recorded a few shows but one show was way better sound wise and performance wise  than the other shows.  So we chose that one gig. The live album should come out in the next few months. I have heard some of the songs and the mix sounds really good, the vibe is great you can hear the crowd well and it’s a good set list. Totally different from the last live album. There will be also a couple of surprises in the months to come as well.”

What will be the musical direction of the new Voivod studio album?
The only musical direction is forward because we don’t want to do the same thing again. I guess on the new album we are going to keep the Voivod identity, pushing boundaries and getting the best out of each member. We have this chemistry where there is no ego in the room everyone’s welcome to pitch in an idea. There is a lot of improvisation when we jam together and there are some magic moments happening and that is what we are looking for. That is how it will happen with file sharing one idea can provoke another one and then it takes form and then transforms where we have to nurture the idea, it’s a sculpting wave. The album sound will be similar to the new modern era of Voivod since the Post Society E.P. You can tell there is something different going on, everyone in the band has evolved musically as well even Snake doesn’t write the same way he was writing 20 years ago. Personally I would like to write just one song, a more in your face old thrash school song, not the whole album. The wake was very polished and I miss a little bit of that rawness. However a lot of the other songs will probably be more intricate and progressive as well. The new album will released probably around 2021″