Posted by tarjavirmakari on May 27, 2020
Posted in: Int. News, Interviews, News. Tagged: CARNIÇA. Leave a comment

CARNIÇA (Portuguese word for “Rotten Flesh”) is a traditional Heavy/Thrash Metal band formed in 1991 in southern Brazil, with several demo-tapes and four full-lengths released, the group is now preparing to celebrate 30 years next year with the release of a new album. Some plans had to be postponed due to quarantine, but the band takes the time to compose the songs on the new album, in addition to preparing a single for soon and participation in some tributes.

Mauriano Lustosa, lead singer and founder of the band, tells some of these plans and a little more about the band to Metal Shock Finland readers.

The band will celebrate 30 years in 2021, are you preparing any special things to celebrate this brand?

Mauriano: Yes! Finish 30 years on April 21, 2021. We are planning to release a new album, turn northeast, release a video and participate in less than 3 tributes for great Classic bands.

You use to call your sound “Heavy Rotten Metal”, tell us more how about this label.

Mauriano: The inclusion of Rotten is kind of an adaptation to the producer, because we play and we are a Heavy Metal band. There is a lot of tradition in our DNA. Maybe Rotten comes, maybe because the band is called “Carniça” (rotten flesh).

Paralleling the time you started and the current times, compare how the recording conditions were at the time when you have recorded the first LP and the conditions nowadays.

Mauriano: Ahhhh. The thing has completely changed!!!! Just to give you an idea, we are now recording a single during quarantine period. Each at home, in our home studios. In the past, It used to be a legend to record. It has no equipment and no technician can use it. Recording Metal was an epic !!!! Today any kid does a great job. Of course, those recordings sometimes sound similar. Many bands sounding the same in the recordings ….

The band also has a tradition of record personal versions of metal classics in your albums, such as Slayer, Wasp and more recent, a version for “Midnight Queen” of brazilian Death/Black Metal pioneers Sarcófago. Tell us more about these versions and their importance to you as a musician or even a fan.

Mauriano: We still had Venom. Not to mention several participations in tributes, whether official or not … Man, it’s a tribute, a vote of recognition for bands that inspired us to be alive today. We are about to launch the 5th. album and it will certainly have a cover. Also, live, Always we play the set list of the album we are promoting plus a cover.

Speaking about versions, you are also about to participate in some tributes, tell us a little more about these news.

Mauriano: The first is the tribute to the KISS Brazillian Rock City. We will be participating with the song “Love Gun”. The second is a tribute to the GREAT IRON MAIDEN, “South Americans Irons”. We already have the song ready, but because of the pandemic everything is stopped and we cannot disclose which song we will play. The third is a tribute to Slayer and we are in the process of closing. It is 99% correct !!!! Participating in tributes is an excellent showcase for the band. We make ourselves heard with greater scope ….

Almost 3 decades on the road, how do you see the situation of copyright bands, because even with all the market changes, many artists continue to release new works, although even some, including you, had some gaps, others also came to declare that they did not new discs are worth burning.

Mauriano: Nowadays an authorial band records and keeps itself alive due to stubbornness and love for what it does. It is very exhausting and expensive to keep a band recording, promoting, playing live. Carniça, for having many years active, manages to sell merchandises, CDs … But in reality, it is tied in the financial aspect. And if you analyze it well, this is already a big thing. Many bands pay “producers” or “agents” to be able to play festivals or open to bigger bands. I don’t know, everyone knows what is best for their career and how to manage it in the best way. We don’t pay, we get paid. We play a few live shows on a year, but when we do, we play on a cool stage, with cool equipment and turning on the horn with every chord. Authorial Metal, mainly here in Brazil, is something for those who have passion, perseverance and the desire to see their work spanning decades !!!! 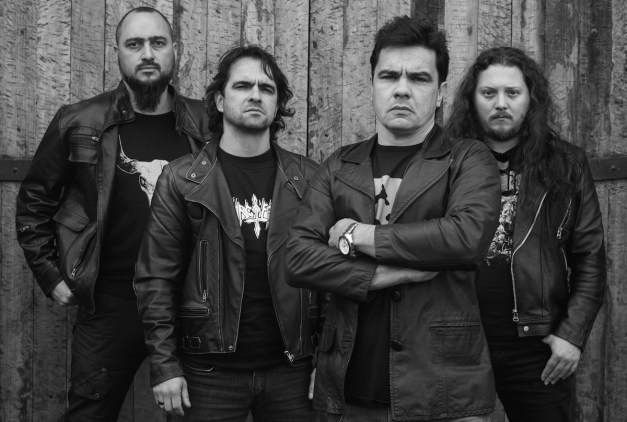