A brand new, vinyl-only edition of the classic BOLT THROWER ‘Peel Sessions’ recorded for legendary Radio One DJ John Peel is out now.
Recorded between 1988 and 1990, the vinyl features 12 tracks which chart the development of the band from early punk-influenced recordings through to the more death metal approach of the final session, including raw versions of classics such as “War Master” and “Drowned in Torment”.
From the very earliest days of Earache Records, BBC National Radio’s John Peel was a huge supporter of the Earache label and its extreme grindcore bands. Peel first offered BOLT THROWER a session in 1988, and invited them back at the end of 1988 and again in 1990 to the hallowed Maida Vale studios to lay down some classic recordings.
‘BOLT THROWER – THE EARACHE PEEL SESSIONS’ is available now on vinyl LP in black as well as the following limited edition colours:
100 – Forgotten Existence (SOLD OUT)
200 – Eternal War (red with white & black splatter)
300 – Drowned in Torment (purple with blue splatter)
View the coloured vinyl at http://bit.ly/1yhrUJW
Get BOLT THROWER – THE EARACHE PEEL SESSIONS now on limited edition coloured vinyl in Europe at http://webstore.earache.com/bolt-thrower or in North America at http://uswebstore.earache.com/bolt-thrower
Track listing:
SIDE A
(Recorded 03/01/1988, broadcast 13/01/1988)
01. Forgotten Existence
02. Attack in the Aftermath
03. Psychological Warfare
04. In Battle There Is No Law
(Recorded 06/11/1988, broadcast 16/11/1988)
05. Drowned in Torment
06. Eternal War
07. Realm of Chaos
08. Domination
SIDE B
(Recorded 22/07/1990, broadcast 04/09/1990)
09. Destructive Infinity
10. War Master
11. After Life
12. Lost Souls Domain
Get more BOLT THROWER news and info:
Official site – http://www.boltthrower.com 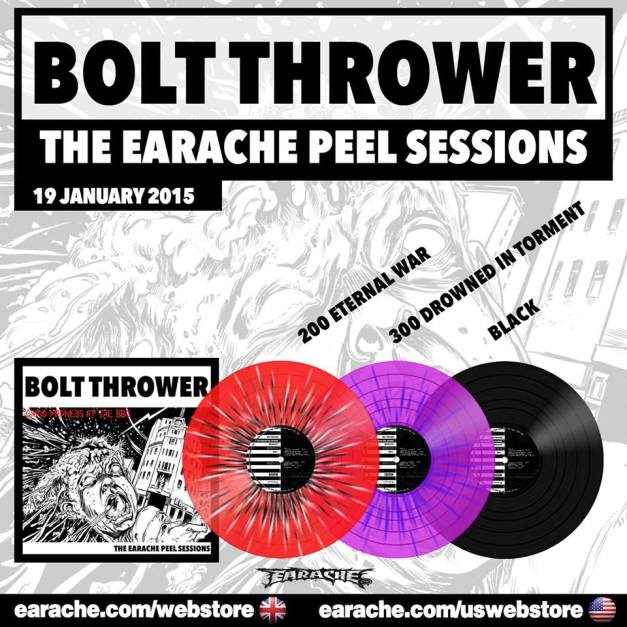