Following the postponement of the tour scheduled for November last year, the anticipation has been building since then for the return of the ‘Voice Of Rock’, the legend that is Glenn Hughes, to UK shores.

Glenn‘s first solo album in over eight years, “Resonate”, was released in early November and received only positive, glowing reviews! I was particularly looking forward to seeing some of the new songs played live.

The Rescue Rooms was pretty full when my son and I made our way through at 7pm. UK hard rockers STONE BROKEN appeared onstage not long after, full of energy and obviously delighted to be opening for Glenn. Frontman Rich Moss remarked how happy he was to see the venue almost full at this stage of the evening and their set was greeted with enthusiasm from the crowd. The band performed tracks from their debut album “All In Time”, as well as a brand new track, which was announced will be on the follow-up album. STONE BROKEN played an impressive set, full of energy (with only just enough room onstage for guitarist Chris Davis to move around!) and professionalism, proving to be very popular with the crowd! 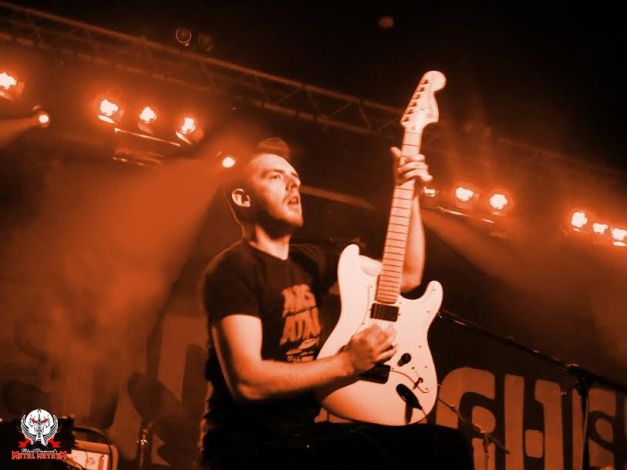 The majority of the audience was on the more mature side of life, testament to the lengthy time span of Glenn‘s career. That said, there was also a younger element in the crowd, so it’s great to see that parents are involving their children and passing on the love for true legends of music.

Band members keyboard/Hammond organ player Jay Boe, drummer Pontus Engborg and guitarist Soren Andersen appeared onstage to much applause, along with a very happy looking Glenn Hughes, bursting into the first song of the set, ‘Flow’ from “Resonate”. Tonight’s set contained a healthy mixture of tracks from Glenn‘s 40+ year career, it can’t have been an easy task to decide which songs to include, but it was a set list very well chosen. 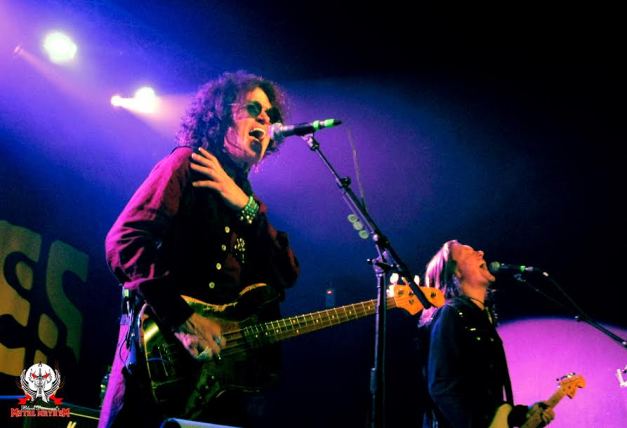 Up next a couple of older songs – ‘Muscle & Blood’ and ‘Getting Tighter’. Glenn‘s voice sounded in fine form, even though he later told us that he had a cold. He looked every inch the legend, with his worn looking Yamaha bass, long flowing hippy style shirt with waistcoat, flared trousers and scarf, not forgetting the cool touch of orange thumb nails! Another new track, ‘Stumble And Go’ complete with heavy soulful grooves went down well with the crowd.

TRAPEZE track ‘Medusa’ was a highlight of the show, Glenn telling us beforehand that he wrote it aged seventeen in his Mum’s kitchen, dedicating the song to her. ‘Can’t Stop The Flood’ and ‘One Last Soul’ were excellent. Throughout the show Glenn‘s vocals were fantastic, along with great presence and precise guitar riffs from Soren, plenty of power and skill from Pontus behind his eyecatching glitter green drum kit and Jay made the Hammond organ sing, a perfect addition to any Glenn Hughes song!

Glenn told a few stories and had a few words to say between songs, some poignant, mostly funny – for example a trouser mishap and bass guitar tuning from his DEEP PURPLE days, giving the crowd a laugh!

Moving on to some classic tracks from the DEEP PURPLE era – ‘You Keep On Movin” and ‘Might Just Take Your Life’, which Glenn dedicated to his old friends Jon Lord and Keith Emerson.

An excellent balance of heavy rock fused with soul brought us ‘Soul Mover’ then the epic BLACK COUNTRY COMMUNION track ‘Black Country’, a perfect end to the set.

Glenn and his band completed the night with two brilliant final songs for the encore – ‘Heavy’ from “Resonate” and the iconic DEEP PURPLE track ‘Burn’, absolutely fantastic! Glenn is always extremely humble and thankful to his fans for their love and support, giving 100% to them with each performance.

The band took their final bows and Glenn left us with the strong message: “Love one another, music is the healer. It’s the only thing that we can rely on to give us the self satisfaction that we’re going to be okay. Music is the centre of my universe.”