Hot on the heels of the first track reveal, and with two weeks before the release of their debut full-length album “Dansen låter fra graven åter”, Norwegian Folk Metallers ELVARHØI are giving fans a chance to hear a second track from the album.

When compared to the band’s first single “Vertshuset Dovregubben”, the new track “Kjenningsvisa” finds ELVARHØI in a completely different mood. Gone are the heavy atmosphere and bardic story-telling undertones, to be replaced with something entirely fresher, and more upbeat. As the band explains:

While our first single was one of the earliest songs written for the album, filled with dense atmosphere and long deliberation, our second single is as fresh as we can make it.  We began working on it just a few months before we entered the studio and it represents that moment when the study door opens, letting in a breeze that scatters all the notes and papers, leaving only the finished product.  It is a call to action with a spring in your step and  your eyes on the horizon.  It is escapism in its proper sense – as in a man being released from prison.

The eclectic backgrounds of its members, who draw their experience from Folk Metal and Extreme Metal, as well as traditional Norwegian and Celtic folk music, have enabled ELVARHØI to create a sound that is reminiscent of the golden age of Folk Rock, whilst, at the same time, being quite distinct and very much fitting into the genre of modern Folk Metal.

“Dansen låter fra graven åter” is an album that joyfully takes elements from both Norwegian Folk Music and 70’s Rock and Prog, and adds them to a framework of Heavy Metal, so that it ranges from triumphant metal anthems, to soft and lush “folk singer-esque” ballads that explore a magical world of Faerie and Adventure. 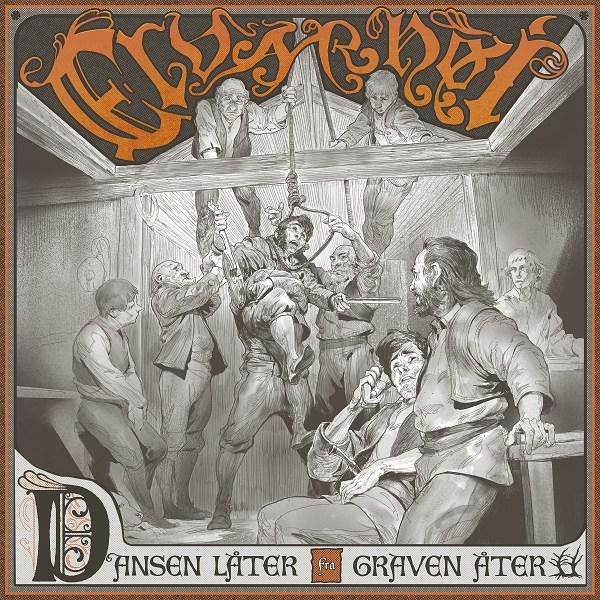 “Dansen låter fra graven åter” will be released by ELVARHØI’s own label Ramljod Records, in both Jewel Case CD format complete with a 24-page booklet, and digital format. It is now available to pre-order from https://elvarhoi.bandcamp.com

ELVARHØI’s lineup of Christopher Rakkestad (RAGNAROK, JORDSKIPSTYRANN) on Bass & Vocals, Magnus Wandås on the Hardanger Fiddle, Sean Murphy on Flutes, Carl Engstrøm (ASTAROTH, DØDSFALL, KVALVAAG, SARPEDON, TROLL, MOLOCH, to name but a few) on Drums, and Martin Langebraaten (SARPEDON, RAVEN WING, FROSTHEIM, SOLMUND) on Guitars,  will be debuting the new album live in Oslo on the 19th October at the Rock In. Details at https://www.facebook.com/events/396486787592019/

To celebrate the impeding release ELVARHØI recently debuted a video for the track Titled “Vertshuset Dovregubben”, which is in the form of a fascinating screen capture of the work of artist Even Mehl Amundsen, taking the viewer through the process he underwent to create the beautifully detailed cover art for “Dansen låter fra graven åter”.