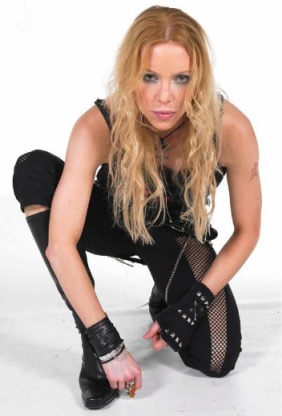 Greece’s Rock Overdose recently conducted an interview with vocalist Angela Gossow of Swedish/German extreme metallers ARCH ENEMY. A couple of excerpts from the chat follow below.

Rockoverdose.gr: “Khaos Legions” is the eighth album of the band that was released six months ago. Are you satisfied with the final result and what has the response been so far from fans and music press?
Angela: The response has been really good. We can tell by the fact that more and more people come to our live shows.

Rockoverdose.gr: Compared with the previous albums, what is in your opinion the main difference of “Khaos Legions”? I think in a way, it’s more powerful with fast, sharp-riffing songs. What do you think?

Angela: The album is more complex. We used four years’ worth of riffs and melodies. So there is a lot of stuff happening on the album. More is more — that was our approach to this record. Make it an intense journey.

Rockoverdose.gr: Based on your tour itinerary, you have an extremely busy schedule with shows day after day and short breaks. Where did you find all this energy on the stage during the concert?

Angela: Yes, we play a lot of shows and my workload as the manager and vocalist in ARCH ENEMY is immense. I have to be strong and healthy for that — so I take good care of my body, I am a vegan, I work out a lot. I will also take a year or more off after we finish the touring cycle for “Khaos Legions” in 2012. I need some time to recharge my batteries. ARCH ENEMY will go on hiatus for a while.

Rockoverdose.gr: Would you say you prefer touring or being in the studio?

Rockoverdose.gr: One of my favorite tracks is “No Gods, No Masters”. This song has amazing lead guitars and depressive but angry vocals, combined with deep inner lyrics. Would you like to give us more details about it?

Angela: “No Gods, No Masters” represents what ARCH ENEMY is about: anarchist atheists. It is about finding that inner strength instead of looking for phantasy help “from above.” It is about finding yourself really and fighting for your dreams, taking responsibility for yourself. It is quite a personal song — it reflects exactly how I feel and how I live my life.

Rockoverdose.gr: What do you like to do, to relax in your spare time?

Angela: I love working out, relaxing in a sauna, smoking weed, watching documentaries, educating myself.

Rockoverdose.gr: How would you describe yourself? Extrovert or introvert?

Angela: I have become very introvert over the years. The more “public” and known I am getting, the more I need privacy and silence. I am very extroverted on stage, so the rest of the day I am almost invisible.

Rockoverdose.gr: How would you like people to remember ARCH ENEMY? Have you ever thought about it?

Angela: I hope they remember us for the music we created and what we are: a dedicated, hard-working, intelligent metal band which toured all over the world and broke many preconceptions and boundaries and played in many exotic places.