HELSTAR to Tour with FLOTSAM AND JETSAM in USA This Fall

Heavy metal monsters HELSTAR have announced the US tour with FLOTSAM AND JETSAM  and HATCHET,  kicking off November 4th in Tucson, AZ and running until December 9th. The tour is presented by Bravewords.com.

James Rivera comments: “So as the world turns. Here you go my friends. The kind of tour I have been waiting for a life time for! Funny thing is it couldn’t get any closer to home since I once filled in and sang with Flotsam myself. Wow! This is going to be one hell of a full on metal show. So for all of you who are into the real shit! This is the tour you do not want to miss! Vampiro is very happy and looking forward to transforming as many souls possible!!!”

HELSTAR‘s new masterpiece “Vampiro” was released on August 26, via David Ellefson‘s EMP Label group!  “Vampiro” is another opus of tales of Dracula and vampires like the band’s all time most acclaimed 1989 release “Nosferatu” (produced and mixed by Bill Metoyer) in the same vein musically with shades of who HELSTAR are today. First single “Black Cathedral” was released on April 9th, via EMP Label group. “Vampiro” is mixed by Bill Metoyer, and is certainly proving to the world that there is much much more left in these Texas Metal Legends!

Pick up your copy of VAMPIRO today, in stores or from empmerch.com!

“Vampiro” tracklist:
1. Awaken Into Darkness
2. Blood Lust
3. To Dust You Will Become
4. Off With His Head
5. From The Pulpit To The Pit
6. To Their Death Beds They Fell
7. Malediction
8. Repent In Fire
9. Abolish The Sun
10. Black Cathedral
11. Dreamless Sleep

FLOTSAM AND JETSAM: Release First Full Video Promo For ‘Life Is A Mess’

Posted by aliblackdiamond on June 6, 2016
Posted in: Int. News. Tagged: 'Life Is A Mess', Flotsam and Jetsam. Leave a comment

FLOTSAM AND JETSAM have released their first full video promo for the track ‘Life Is A Mess’ from their recently released self-titled album. Check it out below:

Posted by tarjavirmakari on May 1, 2016
Posted in: Int. News. Tagged: ‘The Metal Voice’, Flotsam and Jetsam, Jimmy Kay, Michael Gilbert. Leave a comment

Jimmy Kay from Canada’s The Metal Voice recently spoke to  FLOTSAM AND JETSAM’s guitarist Michael Gilbert as the band is set to release their new self titled album on May 20, 2016 on AFM records.

“What we did differently is we really focused on the songs because the last two years the feedback we got is we really want you guys to go back to old school thrash. We have been experimenting with a lot of stuff, we have been using some samples here and there, we slowed some songs down, and we’ve gone to some different genres. Just exploring a little bit, which feels good to me but what really feels like home is the thrash metal, the fast, speed metal we were doing on the first two records. So we got together and writing this album made more sense to me to play that type of music and it just feels more like home, ok this is what we belong to, this is what we do.”

“It was never a convinced idea, hey let’s do a song that kind of sounds like an Iron Maiden song. It was never designed for that at all. This one was one of Steve’s ideas and by the time it was done and Erica A.K. put that vocal melody on it, it was like oh wow this is pretty cool. We have gotten a lot of really great feedback. I haven’t seen one bad review on it yet.”

“It’s was a great opportunity for him. I’m still great friends with Newsted I talk to him at least once or twice a month. Nobody was ever really mad at him. It was just a decision he wanted to make. We all knew Newsted was the guy for this, so we kind of expected it. Jason was definitely the right guy to fill Cliff’s shoes, really nobody can but Jason brought to Metallica his personality to that band. He has always been an over the top personality. Just an awesome character to hand out with, he is very funny, he is larger than life when you hang out with him.”

“When he left this band he was deep into it, he was a full member and there would be no other band that he would leave to go join Metallica.  Garage Inc came out before that and you can hear the bass on that and it sounded killer. And when Justice came out there was no bass and I am not speaking because he told me this or that. Oh shit what the hell did I just do, I’m still in this band and but I am not heard. Which is awful because that guy is a tremendous bass player? “

U.S. thrash metal legends FLOTSAM AND JETSAM have inked a worldwide deal with AFM Records. The band’s new album, simply titled “Flotsam and Jetsam” will be released on May 20th. The band have released a lyric video for the track ‘Iron Maiden’, check it out below:

Flotsam and Jetsam is a band from Phoenix, Arizona with a legacy that goes back well over 30 years.  Originally signed to Metal Blade records in the mid 80’s, Flotsam and Jetsam released their highly acclaimed debut “Doomsday for The Deceiver” in July of 1986.   At this time the band consisted of Eric AK Knutson (Vox), guitarists Michael Gilbert and Edward Carlson, and founding members Kelly David Smith (Dr) and bassist Jason Newsted.  Soon after the release of “DFTD”, Newsted left the group to join Metallica shortly after the passing of their bassist Cliff Burton. Shortly after, Flotsam hired bassist Michael Spencer (Sentinel Beast) and continued to tour and write for their next album, “No Place For Disgrace.”
In theory, the band FLOTSAM AND JETSAM started in January 2015 when Eric AK, Mike Gilbert, Michael Spencer, Steve Conley and Jason Bittner got in a room together to start rehearsing for upcoming 2015 European tour dates, and to commence writing for the band’s next record.  Initially the band concentrated on the back catalog and most recent setlists to make sure the touring obligations would be fulfilled, and the band was comfortable playing together.  Soon after, the band focused on it’s writing and started pre-production for the new songs that were taking shape.  After a 5 month initial writing process, the band completed 18 rough ideas to start having Bittner track drums to.  At first the band thought about a double release, but realized it would be better to concentrate on an album’s worth of killer material by what essentially is a new band with a 30-year history.

After picking the final songs, the band compiled some demos to start gathering label and producer interest.  Shortly following summer festivals, a short US tour, and another fall European headline tour, the band finally secured Chris Collier (Prong/KXM) to produce the band’s “return to form”, as well as AFM records to provide the much needed label support that the metal veterans required.

The end result is the self- titled effort “FLOTSAM AND JETSAM” which is the culmination of a year of hard work which shows five very distinct personalities and influences come together for the common goal of creating another soon to be metal classic, as well as another pillar in the foundation of a band that has managed to stay alive and current amongst an ever-changing music scene.

In addition to being available as a digipak CD, the album will also be available as a limited gatefold 2LP edition in black and gold, both limited to 500 copies.

A limited edition boxset (500 copies) will also be released and includes the digipak, a Flotsam And Jetsam flag (official tour backdrop design), patch, printed autograph card, and certificate of authenticity. Order details can be found at the AFM Records Shop.

FLOTSAM AND JETSAM: Sign With AFM Records, New Album In May

US thrash metal legends FLOTSAM AND JETSAM have inked a worldwide deal with AFM Records. The band’s new album, simply titled “Flotsam And Jetsam” will be released on May 20th.

Timo Hoffmann (AFM Records A&R): “We’re honoured that Flotsam and Jetsam have decided to join our roster. Of course we’ve followed their career for many years and always valued the band’s qualities. This new, self-titled album is a blast! We’ve been convinced right from the very first demos sent. It was obvious to us why the album is titled as it is: ‘Flotsam and Jetsam’ holds the essence of what defines the band – this album is a statement, something to be proud of. And we are proud to start working with the band with such a special release“.

The band states: “Flotsam and Jetsam really appreciated the fact that AFM laid out a legitimate, business plan for us when they made their offer to sign us. We believe they are as committed to us as a band, as we are to providing them with quality metal to get behind and promote. Along with signing to a new label, all the forward movement for the band in the last two years has also allowed us to partner with new team members; like Chris Collier of CMC21 Productions, who just completed the mixing and mastering of the album and Andy Pilkington of Very Metal Art out of the UK, for the album cover and stage production art, who are both doing a phenomenal job for us. We’re looking forward to playing the music on this album live, which hasn’t been a luxury for the band on past releases, as well as debuting our new stage look”.

Flotsam And Jetsam is:

Posted by tarjavirmakari on May 21, 2014
Posted in: Int. News. Tagged: Flotsam and Jetsam. Leave a comment

Metal Blade Records announce that the Legendary thrash metal act, FLOTSAM AND JETSAM, are set to return to the road this summer with thrash newcomers, Exmortus, along with be San Francisco’s Hatchet as the opening act. “No Place On Tour 2014″ will begin on July 9th in Hollywood, CA at the world famous Whisky a Go Go and wraps up at Club Red in Mesa, AZ on July 19th. The full list of dates are available below. 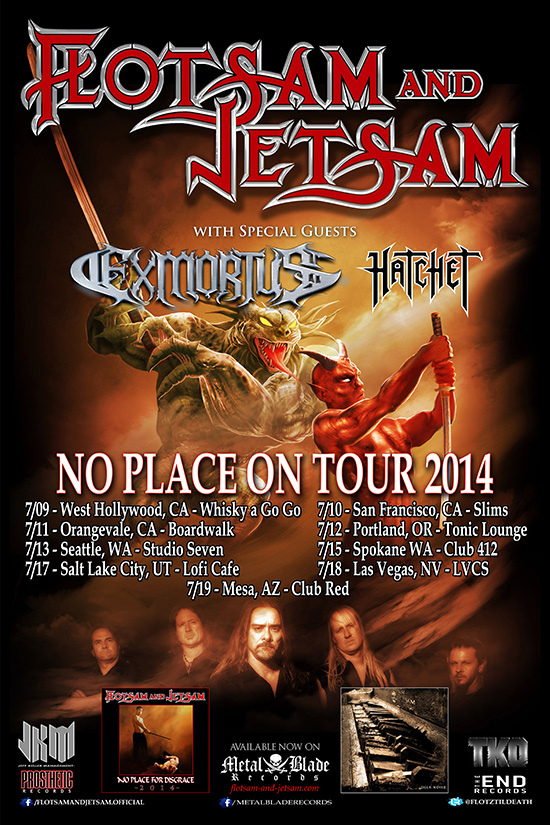 Drummer Kelly Smith comments: “We are psyched to be hitting the west coast again in support of both Ugly Noise and No Place for Disgrace (2014). Coming right off the summer festivals in Europe we will be fired up and ready to shred. With the addition of Steve Conley(F5) and the return of Michael Spencer it promises to be a killer show.”

In April of 2013, Metal Blade released “Ugly Noise,” the band’s eleventh full-length album, their first release on Metal Blade since 2001, and the follow up to their 2010 album, The Cold. The record also marked the return of original members Michael Gilbert on guitar and Kelly David Smith on drums, who had not recorded with Flotsam and Jetsam since High in 1997. To purchase this album, as well as Flotsam and Jetsam merch, visit indiemerch.com/metalbladerecords.