Posted by tarjavirmakari on February 2, 2016
Posted in: News. Tagged: “Girl In A Vortex“, GRAVE PLEASURES. Leave a comment 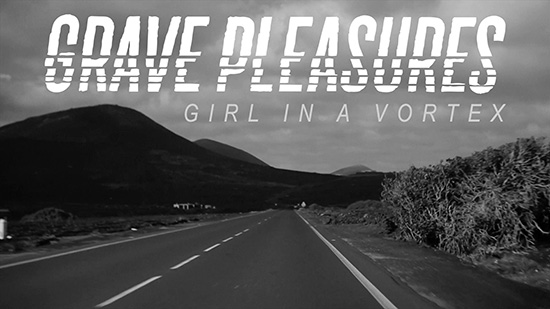 After releasing their debut full-length, “Dreamcrash”, via Metal Blade, Finnish death-rockers GRAVE PLEASURES are now launching a new video for the track “Girl In A Vortex“, taken from the aforementioned album. To watch the clip, please visit: facebook.com

For another preview of “Dreamcrash” – and to purchase the album in various formats! – head over to: metalblade.com/gravepleasures, where the first single, “New Hip Moon“, is streaming.

Formed out of the debris of Beastmilk – the band that had indie fans, goths, punks and music press praising 2013′s Climax – Grave Pleasures consists of singer/songwriter Mat McNerney (also of Hexvessel), bassist Valtteri Arino, guitarist/songwriter Linnea Olsson (The Oath, Sonic Ritual), drummer Uno Bruniusson (In Solitude, Procession), as well as live and studio session guitarist Juho Vanhanen (Oranssi Pazuzu). This impressive line-up created a complex and feverish set of modern rock songs, found on their debut, Dreamcrash. Urban tribal rhythms, potent melancholia, raw pop sensibility, irreverent ferociousness – Dreamcrash is seductive in its surrealism one minute, and a cold shower of harsh reality the next. Named one of Rolling Stone‘s “10 Artists You Need To Know”, read on for some reviews of Grave Pleasures:

“…pretty awesome for a band barely out of the creative gate.” – DecibelMagazine.com

Posted by tarjavirmakari on October 7, 2015
Posted in: News. Tagged: "The Wailing Dead" Tour 2016, GRAVE PLEASURES, The Children Of The Night, Tribulation, VAMPIRE. Leave a comment

Having just returned from a successful first Japanese tour with Watain as well as UK shows with Paradise Lost and Lucifer, Sweden’s TRIBULATION continue to tour in promotion of their much acclaimed “The Children Of The Night” album, which was released worldwide in April of this year via Century Media Records.

TRIBULATION are now happy to announce GRAVE PLEASURES as co-headline act for the “The Wailing Dead” Tour 2016 across central Europe in January, which also features fellow Swedes and label-mates VAMPIRE as support. Here are the exact dates for the tour including the now available pre-sale ticket-links: 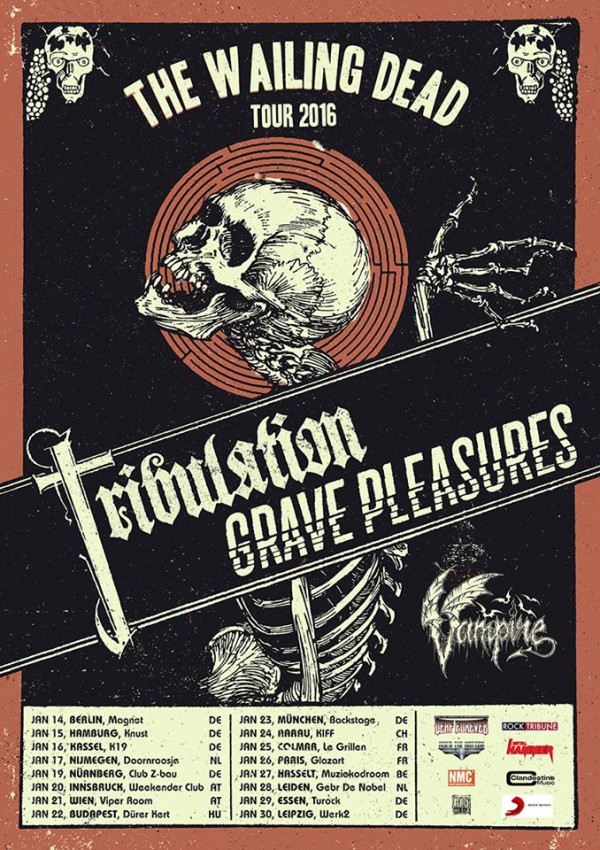 GRAVE PLEASURES have checked in with the following comment about the tour: “There’s a new dark wave coming, black-flagged by bands like us and Tribulation, who stretch their skeletal hands further out into the abyss of deathly rock. Each in our own directions, but sewn at the naval by shared influences, as children of the night-music. You’re either with us or against us. Either way, we’re out on the road through Europe in January 2016 to crash your dreams and drink your spirits. Fear the wailing of the dead.”

And TRIBULATION added: “We’re proud and excited to announce that death rockers Grave Pleasures will join forces with us and the mighty Vampire on our European tour in January! Safe to say this will be the grandest achievement in our journey so far – the product of our struggle. Prepare for experiences wonderous and strange!”

But before that, TRIBULATION are next embarking on an extensive tour of North America together with DEAFHEAVEN (as well as ENVY on selected dates) in a week from now. Check out the exact dates for that run as well as other shows for later in 2015/2016 which have been confirmed recently here:

For a preview of TRIBULATION‘s “The Children Of The Night” album, which not only entered the official sales charts in Germany on # 42 upon release, but is already tipped as an “album of the year” contender by numerous high-profile media outlets, check out the following singles:

More activity for TRIBULATION to be announced very soon… 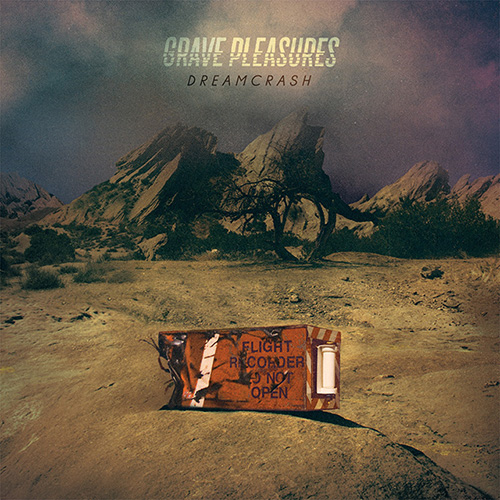 Finnish GRAVE PLEASURES have officially released their debut album “Dreamcrash” via Metal Blade Records in the US, and Sony Columbia worldwide. Formed out of the debris of the band Beastmilk – the band that had indie fans, goths, punks and the music press dancing to their highly praised debut album “Climax” in 2013 – GRAVE PLEASURES are taking the concept of the apocalypse one step further.

Watch the brand new video for “New Hip Moon” and order “Dreamcrash” now at metalblade.com/gravepleasures. The album is available digitally now, with CDs to be released on November 13, and vinyl to arrive in early 2016.

In May of this year, this impressive line-up entered the studio together with award-winning producer Tom Dalgety (Killing Joke, Royal Blood). The result is a complex and feverish set of modern rock songs. Urban tribal rhythms; potent melancholia; raw pop sensibility; irreverent ferociousness – “Dreamcrash” is seductive in its surrealism one minute, and a cold shower of harsh reality the next.

“I am concerned with a total collapse of our dreams“, says Mat McNerney. “Hacking out this feverish, frantic and very uninhibited music, it exposes and lays raw some intense emotions. As we get deeper and closer to capturing the spirit of what we set out for this band to be, we are touching some vital nerves. It’s getting under the skin, under the flesh.“

The stunning artwork (see above) was made by Samantha Muljat at Bloodbank Design.