ORDEN OGAN: Release Lyric Video “Come With Me To The Other Side”, Feat. Liv Kristine

Posted by tarjavirmakari on July 3, 2017
Posted in: Int. News. Tagged: "Gunmen", “Come With Me To The Other Side”, Liv Kristine, ORDEN OGAN. Leave a comment

German power metal force ORDEN OGAN will release their highly anticipated new studio album “Gunmen” on July 7th. The upcoming album’s third single is “Come With Me To The Other Side”, which features former Leaves’ Eyes/Theatre Of Tragedy frontwoman Liv Kristine as guest vocalist. A lyric video for the song is available now, watch it below.

“When whe had just finished the intro for “Come With Me To The Other Side”, we immediately felt that it needed a fragile, angelic, female voice to bring it to full bloom and capture the song’s atmosphere in a perfect way. Of course we thought of Liv right away and were happy that she confirmed right away. When she came to my studio and sang her parts, she even exceeded our expectations”, vocalist /guitarist Seeb says. “Funny note: in a very early stage, we even considered making “Come With Me To The Other Side” a pure ballad – well, for just about 3 seconds”, he grins.

German melodic power metal institution ORDEN OGAN will embark on their next headlining European tour this October and November. With them on the road: their new studio record „Gunmen“ and the special guests RHAPSODY OF FIRE.

ORDEN OGAN, Germany’s premier power metallers, have exceeded themselves with their new (5th) studio album, titled „Gunmen“ (out July 7th). Undoubtedly, the band has delivered their heaviest but at the same time also most melodic piece of work. With their latest studio album “Ravenhead” (2015), ORDEN OGAN toured Europe supporting HammerFall and later Powerwolf too, before running their first own European headlining tour in March 2016. “Ravenhead” became a chart success in several European countries, with #16 in the German album chart marking their all-time best result. Now “Gunmen” continues the band’s track record, combining classic Teutonic metal with a modern production on international top level. All this results in 10 metal hymns for eternity!

On October 13th, the band’s next headlining tour will kick off – and it’s about to become one of the year’s best melodic metal tours for sure.

Italian symphonic power metal masters RHAPSODY OF FIRE will be ORDEN OGAN’s special guests this time and another high-class supporting act will be announced soon as well. RHAPSODY OF FIRE have just released their new album „Legendary Years“ that features rerecordings of old classics and was mixed and mastered by ORDEN OGAN singer/producer Seeb. On this tour they will present new singer Giacomo Voli and the new drummer Manuel Lotter (ex-Emil Bulls).

Power metallers ORDEN OGAN have set “Gunmen” as the title for their highly anticipated new studio album, which will be released on July 7th via AMF Records.

But not only that: the band has announced three Live release shows (supports will be MOB RULES and HUMAN FORTRESS). Tickets are exclusively available in the AFM webshop. The ticket owners will receive an exclusive ORDEN OGAN Live CD on show day!

ORDEN OGAN: Confirmed For METAL ON THE HILL Festival

The METAL ON THE HILL festival line-up is complete!

ORDEN OGAN as one heavy German force in the Melodic Metal realm is said to be one of the most inventive new bands and they are now rounding off the festival bill. Many praise the masterly and unique mixture of traditional Power Metal with modern elements, folk and progressive influences as well as elements from the Gothic genre and ORDEN OGAN know perfectly how to create an atmospheric depth! But does that fit together? Absolutely! 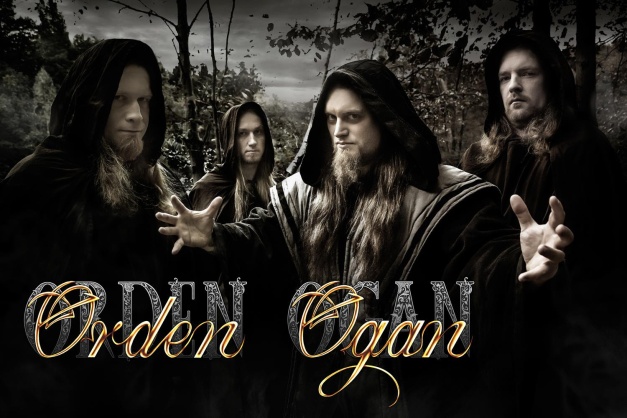 Headliners BLIND GUARDIAN and PARADISE LOST will find their way to Graz for a very special and exclusive Austrian show in 2017! Irish Pagan Scottish Pirate Metal PRIMORDIAL, Scottish outfit ALESTORM, Melodic Metal conjurers INSOMNIUM, Pagan giants ARKONA and Brazil`s tribal female thrash power trio NERVOSA will be on the bill performing exclusive Austrian festival shows as well. ROTTING CHRIST will bring the black cult with a very special old school set and DAWN OF DISEASE will unleash finest Death Metal all over the hill. Popular Symphonic Metal acts SERENITY and VISIONS OF ATLANTIS will round out the bill together with EBONY ARCHWAYS and PAIN IS, both local metal band hailing from the Metal On The Hill hometown Graz.

The first official festival trailer has already been unveiled. Don’t miss out and get in the right METAL ON THE HILL mood here:

We can’t wait to see you all on the mountain!

After entering the album charts in Germany and Switzerland, power metallers ORDEN OGAN come up with good news again: the band (currently on tour with HammerFall), is also confirmed as main support for the upcoming POWERWOLF tour! Also Civil War and Xandria will join the tour as supporting acts. 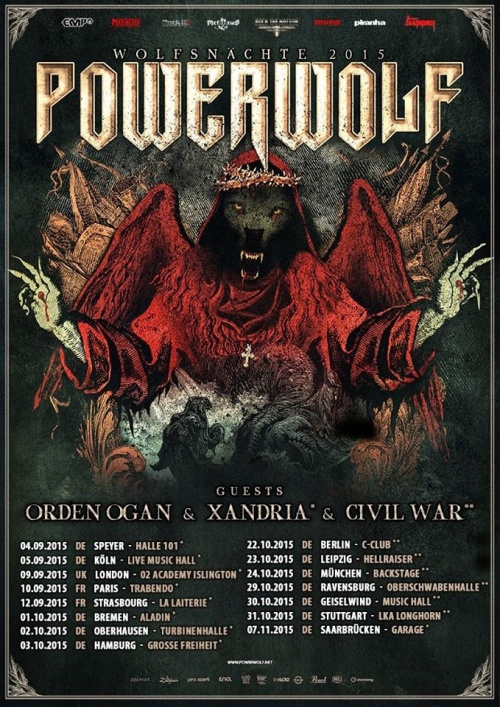 Recently ORDEN OGAN released their new single “F.E.V.E.R.”. Check out the official video clip for the track. “F.E.V.E.R.” comes off the band’s new album “Ravenhead”, which was released on January 16th (EU) / February 3rd in the US, via AFM Records.

German metallers ORDEN OGAN have released their new single “F.E.V.E.R.”. The official video clip for the track is available now, check it out below. “F.E.V.E.R.” comes off the band’s new album “Ravenhead”, which will be released on January 16th (EU) / February 3rd in the US, via AFM Records.

ORDEN OGAN’s 2012 release “To The End” secured the international breakthrough for one of the finest metal bands to emerge from Germany in the last decade. After the very well received “Vale” (2008, re-issued in 2010) and “Easton Hope” (2010), the next logical step was done with “To The End” and its widely popular hit single/video “The Things We Believe In”. Now, after finally receiving the more than deserved attention for their musical creations, ORDEN OGAN return with “Ravenhead”, likely their most catchy and fascinating record. More than ever before in the band’s history, the new piece of work is the result of teamwork, as all members were contributing in the songwriting process, with the lion’s share still coming from band leader Seeb.

“More metal, more choruses, more Orden Ogan”, is the quick summary that Seeb comes up with to describe the new material – a very accurate analysis. “Ravenhead” blends traditional heavy/power metal with an up-to-date, modern production. It could be argued that it takes the sound of metal legends like Running Wild, Gamma Ray or Blind Guardian to the next level. Never before ORDEN OGAN have sounded so history. “We are fans of real painted artworks”, Seeb states. “Working with somebody like Andreas, who did all our album artworks since “Vale”, is just great. He understands our ideas perfectly and became a constant part of the team.”

Guest singers on the album are HammerFall’s Joacim Cans (who contributed vocals for “Sorrow Is Your Tale” and Chris Boltendahl (Grave Digger), who can be heard on “Here At The End Of The World”.

“Ravenhead” was produced and mixed by Seeb, the mastering was handled by Dennis Köhne (Sodom, Lacuna Coil).
ORDEN OGAN will be touring Europe with HammerFall in January/February.