Swedish doom metallers MEMORY GARDEN, will be releasing their next album entitled “Doomain” via Metal Blade Records on 16th April.

You can order the album and also listen to the new song “The Evangelist” at this location.

The band, which also features WOLF‘s Simon Johansson on guitar, will be recording a new music video this weekend. Details are on the bands facebook page at this location. Lucky fans can get in touch and be on the video. 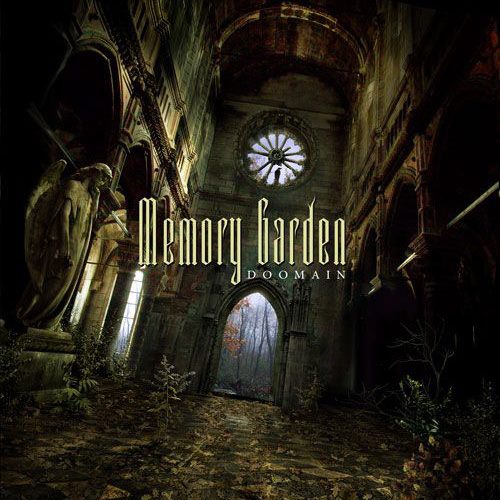 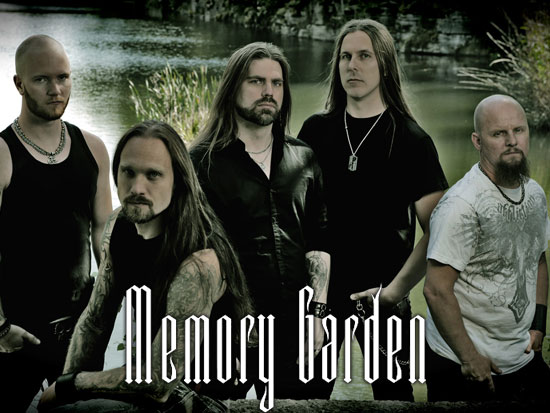 A three-minute video clip of Niklas Stålvind of Swedish metallers WOLF talking about his Gibson guitar when he was in India to perform at the Harley Rock Riders festival can be seen below.

WOLF‘s sixth album, “Legions Of Bastards”, was released in April 2011 via Century Media Records. The follow-up to 2009’s “Ravenous” was produced by Pelle Saether at Studio Underground in Vasterås, Sweden. The cover artwork was once again created by Thomas Holm (the man who was responsible for the legendary MERCYFUL FATE “Melissa” and “Don’t Break The Oath” covers).

It is a year since we last saw WOLF in the UK and this month they are back to shake our eardrums with their Swedish heavy metal, supporting EVILE.

Blackdiamond from METAL SHOCK FINLAND caught up with Viper, Raptor, Tornado and Demon (A.K.A. Niklas, Richard, Anders and Simon) at The Corporation in Sheffield this week and conducted an interview with three of the four “Wolves.”

The show was extremely heavy, extremely loud with excellent metal tunes which left my ears ringing well into the following day!

Read below for some excerpts from our conversation:

Simon discussing WOLF‘s plans for next year said: “The main focus will be to sit down and work on the new album. We’re also playing Prog Power USA and a festival in Spain, but our main goal is to make the album, then a big tour afterwards.”

When asked about the forthcoming show in India, Simon Johansson and Anders Modd said the following: “We don’t really know what to expect. It could be good or it could be excellent (laughs). It’s arranged by Harley Davidson and Rolling Stone Magazine India. We have high expectations and we’re also looking forward to eating some curry and drinking some Indian beer.”
When discussing the impact of illegal downloads Richard Holmgren stated “It can affect us in a good and bad way. The bad way is of course it’s bad for business and people don’t get paid for what they put in. The good way, maybe 1000 people a week could get to hear WOLF through downloading, then they buy a ticket and come to the shows and also buy merchandise. You have to see it in the long term, the bands will get something back from it eventually.”

I was also told some exciting news about a new product from WOLF in the shape of a hot sauce, going by the awesome name of WOLF’S BLOOD! It is being produced in Austria and the band are looking right now at the best way of delivering it to the fans. The guys said “We are working on some fun stuff that we can’t talk about yet, but we do have a hot sauce coming out called WOLF’S BLOOD. It’s 666 thousand Scoville strength and it makes you howl, don’t drink it!!”

Listen to the interview in full below:

Check out the following video footage filmed by Blackdiamond at the show: 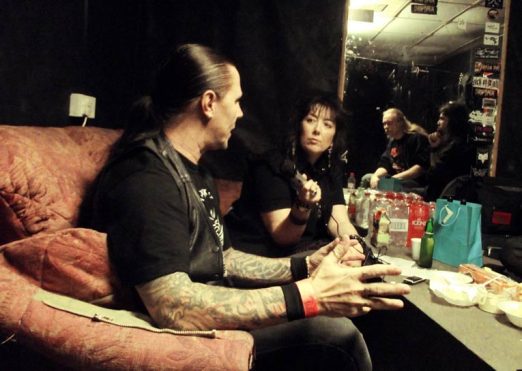 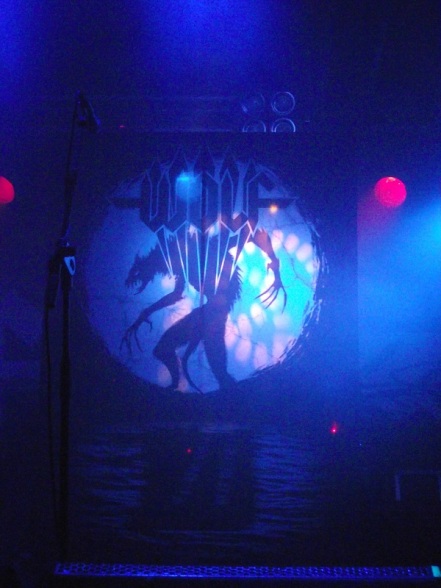 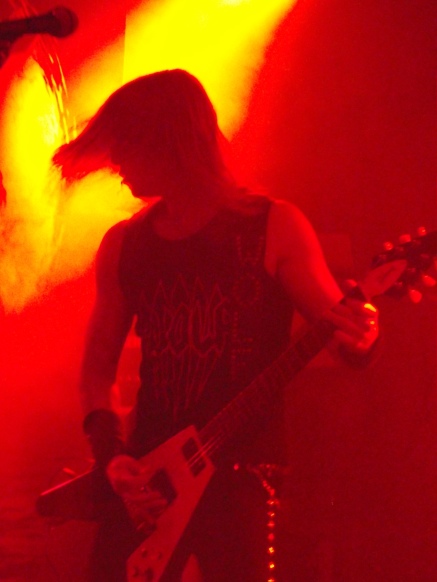 METAL SHOCK FINLAND has been made aware that Swedish metaller and WOLF‘s guitarist,  Simon Johansson got married to Anette in Gålö on the Stockholm archipelago, in the metal land Sweden, this weekend. There were several metal musicians as guests at the wedding, such as Mike Wead as best man, Niklas Stalvind and Anders Modd of WOLF, Stefan, Tom, Ante and Johan of Memory Garden, Kacper and Jonaz of BIBLEBLACK and Messiah Marcolin (ex CANDLEMASS).

Simon joined WOLF in 2011 after the band’s previous guitarist Johannes “Axeman” Losbäck left the band. Simon previously played with WOLF in 2009 when they supported W.A.S.P. for four shows. 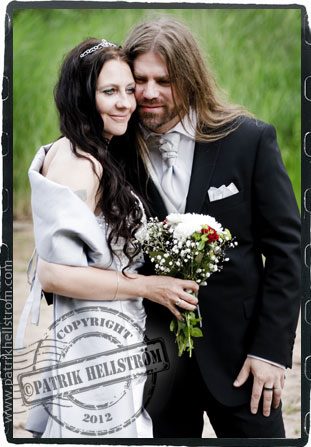 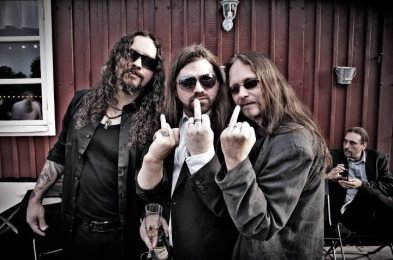 METAL SHOCK FINLAND would like to extend their congratulations to the happy couple.

Metal Shock Finland has recently received  more messages from two more Metal musicians about the legendary singer Ronnie James Dio which can be read below:

Roxy Petrucci (Madam X, VIXEN, Roktopuss, JSRG):   “The one and only Ronnie James Dio. He was a genuine’ Rock Star’ in all aspects without trying to be. Ronnie had an incredible voice, a bigger than life stage presence belting out undeniable great songs . He is a legend and his famous sign of the horns to the metal world will live on forever. Long Live Rock n Roll!”

Simon Johansson (WOLF):  “Ronnie James Dio was to me the best singer ever. I´m not sure we´ll ever see anyone like him. The first thing I remember hearing with him was Holy Diver. I just loved it as I do with all the stuff he did with his solo band but what really stood out to me was the work he did with Rainbow. All of those albums are fantastic and the Rising album is just phenomenal.
I remember seeing Heaven and Hell at Sweden Rock Festival in 2007 and how the show just blew me away. The stage, the sound, the songs and on top of the Ronnie James Dio, goose bumps all the way through. I said to my friend that if I ever had the chance to play a stage like that (I´m thinking of the stage set with the windows, iron fences, gargoyle props etc) I never have to enter another stage. My purpose in life would be fulfilled. I think that was the best live show I´ve seen ever. Another time I was at a Dio show in Gothenburg, I had managed to get myself a VIP pass so after the show I was hanging around because I just wanted to say hi to Dio and shake his hand. He was in the shower so I had to wait around. Time passed by and after a while me and my friend felt the urge to grab a beer so we left. Today I really regret that because I never had the chance to meet Dio in person. I guess it have to wait until I´m on the other side. Thank you Ronnie for all the unforgettable music and memories. See you somewhere over the Rainbow!”

As previously posted, Metal Shock Finland has received  more messages from some Metal musicians about the legendary singer Ronnie James Dio and his brilliant career which can be read on this location.