Posted by meldelacroix on February 7, 2012
Posted in: Reviews. Tagged: "The Landing", IRON SAVIOR. Leave a comment 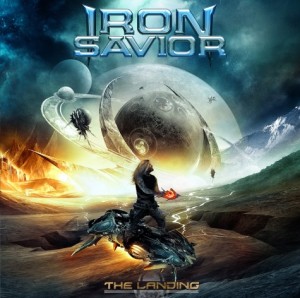 Megatropolis felt the end of course, the metallic stallion slavered well too  reach the forefront, constantly overwhelmed by the large Gamma Ray and Helloween brothers. Blind Guardian, was already running in another category.
Four years have passed and if beautiful packaging excites the eye, it must admit that I had not hoped  for more  of this 7th album (entitled The Landing) horsemen in battle if descriptive and beautiful surname as IRON SAVIOR, drived by the brave warrior Piet Sielk (vocals and guitar, and many more…), the bit tooth desiring to impose once for any in the collective consciousness its proud Steed bring about barrens of a Germanic power metal any first category.

Clearly, the challenge is successful.
Faithful, Joachim “Piesel” Küstner fand Thomas Nack are still there with their sides to the return of Jan-Sören Eckert (already in Affairs on Unification, Dark Assault and Condition Red). A pledge of good sense and an undeniable added value.

Simple, disk sweeps all on its passage, far away from a speed monolithic to propose some tempos slowed but infernal power (“The Savior” or successful ride “Before The bread”, too rare in their world of gross but absolutely unstoppable attempt) and that of melodies, sharpened, which lead to real hymns, such as the proud “Heavy Metal Never Dies” (it would have liked a little more ambitious video…) or the thunderous “Faster Than All” who practice what he preachesnamely, metal nuclear, clear and concise, that IRON SAVIOR control since 1996 with force and honor.
Always this voice so evocative (Chris Boltendhal, Hansi Kürsch, or Blackie Lawless) and this rigour in the comments even mitigated by adding choirs and twins-sharp guitars, move away our teutonics riders of rigidity and the relegation in the meadow to graze ad vitam eternam herbs of frustration.

This angry album gives new life to a group much too under-valued but which is the pride of all those who live and breathe “Metal” (same approach regarding the next RAGE, chronic coming soon…)

IRON SAVIOR, far distant galaxies has run indefinitely in orbit comes with this beautiful album crashed to Earth and therefore the metal contamination can begin. Nobody never leaves safe.
And it is so much the better.