Metal Shock Finland‘s Blackdiamond has recently conducted an interview with British metaller, PARADISE LOST‘s guitarist Aaron Aedy.  It took place prior to their performance on Hammerfest IV main stage to blast their metal. 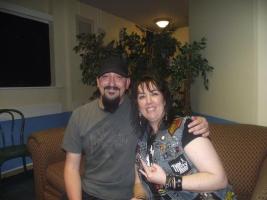 When asked about the soon to be released Tragic Idol album, Aaron  said – “This is the most work I’ve had to do as a rhythm guitarist since our 1992 Shades Of God album. It’s a very guitar-centric album, very heavy.
Some of the songs are among the fastest we have ever done and it’s an album that deserves to be played live.

It’s out 24th anniversary this month and we’re very appreciative of the fact that people are still here listening to us“.

You can listen to the whole of the interview on soundcloud below: