Posted by aliblackdiamond on August 31, 2012
Posted in: Int. News. Tagged: Heavy Metal Kids. Leave a comment
HEAVY METAL KIDS are on tour in the UK in September, with special guests JD & The FDCs supporting on the 4 English dates.
Original band members Keith Boyce (Drums) and Cosmo (Guitar) are pleased to reveal that their mission to get ‘The Rock and Roll Show‘ back on the road is complete with the highly talented Justin McConville on Vocals & Guitar and Ronnie Garrity from Joe Elliott‘s DOWN & OUTZ on Bass!
The dates are as follows:
21st September – Upstairs @ The Darrock – Gourock – Scotland
22nd September – The Dreadnought – Bathgate – Scotland
25th September – Roadhouse – Birmingham
26th September – The Diamond – Sutton-in-Ashfield
27th September – Yardbirds  – Grimsby
29th September – Maximes 2 – Wigan
Tickets available from www.ents24.com
A brief history of the band:

In the beginning … there was Mickey Waller, Ronnie Thomas, Keith Boyce, Gary Holton and Cosmo….a gang of boisterous boys from South London and the East End.

It Was 1972… After a grueling apprenticeship at the legendary Speakeasy Club, THE musician’s watering hole run by co-manager Laurie O’Leary, the boys were spotted by 60’s icon Dave Dee, then head of A&R at the new London branch of Atlantic Records. Armed with a world-wide record contract with the home of Led Zeppelin and Aretha Franklin, in January ’74 they went into London’s Olympic Studios to record their first album, HEAVY METAL KIDS, with Dave Dee as producer. They toured Britain and the Continent to exhaustion, establishing their brand of rebellious, raucous rock’n roll… inspiring a generation of other rebels and setting the stage for an all-out revolution that would change the face of popular music only three years later. They appeared in “The Old Grey Whistle Test” on the BBC, broke every record there was to break at London’s Marquee, did the Reading Festival (as they did every single year they were around) and just played, played, played… In January’ 75, the lads, went in to Island’s Basing Street Studios, to record ANVIL CHORUS, this time with producer, Andy Johns. The band finally hit the US on a whirlwind four month tour with the likes of Alice Cooper, Kiss, Rush, Z.Z. Top, and The Chambers Brothers. Back in the UK, after an extensive tour of France, Germany, England and Scotland, Manager Ricki Farr then took the band away from Atlantic and had them sign to Mickie Most’s RAK Records. Produced by legendary Mickie himself, they recorded a third album, KITSCH. Their cult status has grown over the years, around the undeniable influence they had on the birth of the punk movement and the new wave of British Heavy Metal. Many claim they were the trigger for so much that came in their wake. A good look at today’s bands from both sides of the Atlantic is enough to support this claim. 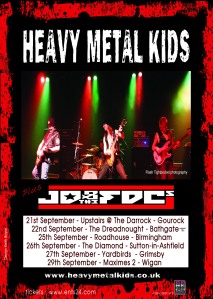 For more details check out this location and the following links:
https://www.facebook.com/HeavyMetalKids
http://www.youtube.com/user/TheHeavyMetalKids