Dimitris Kontogeorgakos of Metal Kaoz recently conducted an interview with the DORO leader Doro Pesch, who revealed her plans for a special 30th anniversary show with special guests. An excerpt from the interview follows: 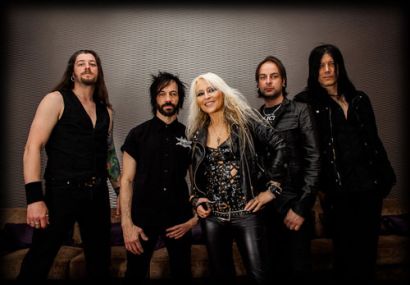 Q: So, how many songs do are you thinking of using on the upcoming tour?

A: “We usually play a two-hour set or two and a half, it really depends on the venue and if there is a curfew, like in the US. But usually I play as long as the fans want. So, I’d say 25 to 30 songs, something like that.”

Q: Awesome! I cannot imagine how difficult is to take out some songs and add new ones.

A: “…we want to do two shows in Dusseldorf like two nights having the old songs or maybe in one night will be really special with an orchestra and great guests. I also want to do something in New York because it’s my second home and I definitely want to celebrate this three times. People come to me and say. ‘why don’t you do this in a whole tour’, but it’s really impossible to have all the guests in a long tour so we have to pick and choose, you know.

Q: The show in Dusseldorf will be next year, right?

A: “Yes. In Wacken next August and then in Dusseldorf we’ll do it in December. I think the 5th and the 6th of December 2013 that I think it’s Friday and Saturday. It’s not really confirmed because we want to do something really special and we have to book the venue, but I think it’s gonna be on those dates.”

Q: So, it’s not confirmed, because we have to book the flight tickets…

A: “We are going to put it on our website immediately when it’s confirmed, so if you want to come, please do not book flights yet because we have to confirm this 100%. In the next four weeks I think we are going to have the exact dates for this.”

You can read the entire interview here.

Doro’s new album, Raise Your Fist, debuted at #65 on the American Billboard Heatseekers chart. The album was released in Europe on October 19th and in North America on November 6th, and features guest appearances by MOTÖRHEAD’s Lemmy Kilmister and OZZY OSBOURNE / FIREWIND guitarist Gus G.

The tracklisting is as follows:

BraveWords’ review of Raise Your Fist can be found here.

Doro will be returning to headline across North America in 2013 with opening act SISTER SIN from Sweden. Complete tour dates are: