Posted by tarjavirmakari on June 3, 2014
Posted in: News. Tagged: "City Of The Sun", SEVEN IMPALE. Leave a comment

With a critically acclaimed Digital EP released by the band  last year as a taster of things to come, Karisma Records has set a release date of September 2014 for SEVEN IMPALE‘s debut full-length album “City Of The Sun”.

Recorded and produced by Iver Sandøy (ENSLAVED, KRAKOW, etc.) at the Solslottet and Duper Studio,  “City Of The Sun” consists of five musically complex tracks, each distinctly different one from the other, and transcending several genres with their range and variety, but whose roots clearly lie within Classic Progressive Rock.

Formed in Bergen, Norway in 2010, SEVEN IMPALE’s relatively young lineup consists of  Stian Økland on vocals and guitars, Fredrik Mekki Widerøe on drums, Benjamin Mekki Widerøe on sax, Tormod Fosso on bass, Erlend Vottvik Olsen on guitar and Håkon Vinje on keyboards.   What sets the band apart from many of the new arrivals on the scene is the sheer diversity of musical disciplines that the members bring with them.  From classical orchestra to big band, metal to jazz and rock to electronic, SEVEN IMPALE have fused all their experience and influences and created a sound that is uniquely theirs.  Their appearance over the past year at festivals as diverse as the Oslo Jazz Festival and Inferno Festival, and the positive reaction of such different audiences,  is a tribute to how successful their sound is.

Utilising elements normally found in the Metal genre “City Of The Sun” shows just how unafraid SEVEN IMPALE  are to explore much harder soundscapes than one would normally expect from  Progressive Rock, whilst the use of the saxophone, enables the band to showcase jazz elements in their music. There is no doubt at all that SEVEN IMPALE challenge the standard genre boundaries, in much the same way that Norwegian SHINING and JAGA JAZZIST have done before. 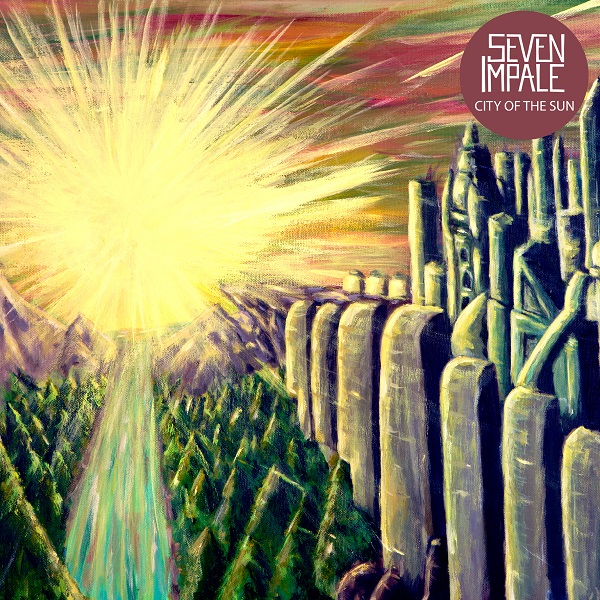 Track listing for “City Of The Sun” as follows:
1. Oh, My Gravity!
2. Windshears
3. Eschaton Horo
4. Extraction
5. God Left Us for a Black-Dressed Woman

More information about SEVEN IMPALE can be found on the band’s Facebook page at https://www.facebook.com/sevenimpale

The whole of SEVEN IMPALE’s 2013 EP can be heard here: