WACKEN OPEN AIR 2014: Review From A Fan Point Of View 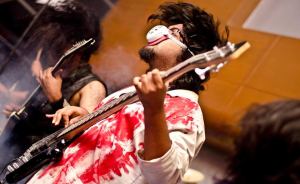 Riju Dasgupta hails from Mumbai, India and is bass player AKA Dr. Hex with horror metallers ALBATROSS. Check out the band here. Riju travelled thousands of miles to visit the hallowed metal ground of Wacken Open Air 2014, the 25th anniversary of the festival, but not before stopping off in Berlin where he met up with Metal Shock Finland‘s Blackdiamond. (Stay tuned for more about that!) Riju felt compelled to write about his Wacken experience, so to discover more from a fan’s point of view, read on :

I’m home after a gruelling week in Europe, and I already have quite a few PM’s asking me how Wacken Open Air was. I think it’s time to come out of review writing hibernation (the last one was a review for a school report back in 2004, when I reviewed a band called Colossus, a band my current bandmates Jay and Kiron played in back then); and write down my Wacken experience in a gist. These are just my thoughts and observations, so if you disagree, feel free to let me know what you feel, and rest assured that I will take no heed of your opinions because I’m a pompous asshole.

I’ve made it my life’s purpose to avoid crowds (the Mumbai trains, working in offices, making friends, 6 member bands); and if you think like me, Wacken Open Air is not for you. The setup is great, the bands are fantastic, the whole ambience is a breathtaking experience…but the positives are counterbalanced by Portaloos (toilets which stink more than anything Metallica’s done in the recent past); and the massive crowds. Think about this…for a lot of Indians, the Maiden gig in 2007 with 40,000 people is the benchmark for a big crowd. This year, Wacken allegedly had 92,000 people! While it’s fantastic to see so many metalheads in a given place at one time, the crowds can be overwhelming. Of course, (almost) everyone’s well behaved, courteous, polite and sweet…but the magnitude of seeing 92000 people in black together can overwhelm you. As a musician, it’s probably it’s something one dreams of…to play to a crowd this big . But as someone in the audience, already sore from camping, I couldn’t wait to get back home. But now, on to the music.

I caught only 2 days of the festival, because of the reasons outlined above, and bad overall planning (my tickets and those of my fellow attendee- Nitin from Primitiv were booked only hours after Kreator stopped playing on the final day)…but Nitin, I and Madhav (from Headbangers India) caught a whole lot of quality acts:

SKYLINE: I’ve been told that this band consists of the Wacken founder, and his friends; and they kickstart the festival every year. With Manowar, Maiden, Van Halen, AC/DC covers…it was a fun beginning to the fest with the whole crowd singing along.

HAMMERFALL: The band came out of a 2 year hibernation, with a special set for Wacken, consisting of songs only from Glory to The Brave. Now, while I love the title track, the rest of the album hardly has the kind of singalong appeal that I like about Hammerfall. They delivered every song fantastically, but I couldn’t wait for them to get started with Bloodbound, Hearts on Fire, Any Means Necessary, etc. Great set, with several special guests…but I preferred their setlist in IIT Chennai by a mile. PS: Their new song – Bushido, sounds better than any other song in the set.

STEEL PANTHER: It’s amazing how these guys can get women to take off their tops anywhere in the world. Steel Panther is fun, does not take themselves seriously, and is enjoyable up to a degree. The crassness got to me and my friends after a while, and we left to get some food.

SAXON: From crass to class. Biff Byford, at 63, commands a voice that can take your breath away. I’m not very well versed with all of Saxon’s albums, so I’m glad they played their classics- Crusader, Wheels of Steel, Power and The Glory, Motorcycle Man, Denim and Leather, Princess of the Night, etc.. An orchestra backed the band on certain songs, and the band was definitely one of my highlights for the festival.

ACCEPT: It’s hard to explain just how powerful Accept sounds live. Tornillo snarls like a beast possessed, and Wolf Hoffman has the best tone known to man. All of us were tired, and couldn’t catch the entire Accept set, but the little we saw was devastating! I’d even go as far as to say that Tornillo does the UDO era stuff maybe slightly better than UDO ever did. If I wasn’t biased towards King Diamond, I’d say that they were the best band at Wacken this year.

SKID ROW: Skid Row played at 11 in the morning, and we caught them from right up front! I haven’t heard much of the new stuff, but most of it sounded quite crushing live. Of course, we know that Johnny Solinger is no Sebastian Bach yada yada yada, but it was fun to actually be in an audience and sing along to ’18 and Life’, ‘Youth Gone Wild’, ‘Slave to the Grind’ and ‘I Remember You’.

CHILDREN OF BODOM: I’m not a fan, but the little I heard sounded quite cool. Shreddage 4 lyf.

BRING ME THE HORIZON: made me walk away towards the horizons, not to return until Carcass much later. 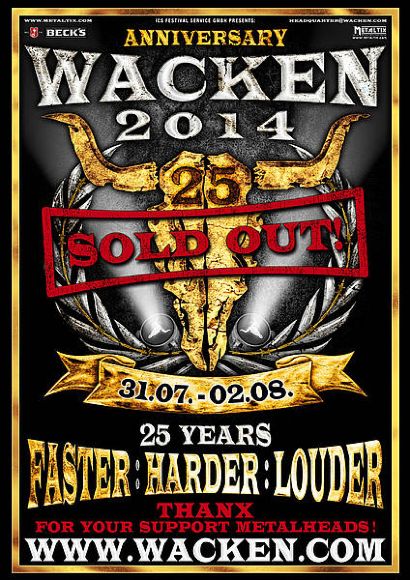 CARCASS: I’ve never been a Carcass fan, and only heard Surgical Steel after hearing all of my news feed wax eloquent about what a masterpiece the album is. They were playing at the same time as Motorhead and Hell, two bands I was quite keen on catching. But, the perils of people in black tshirts getting lost in a crowd comprising of 50000 black tees was too much; and I decided to stay put with my death metal loving friends. And Carcass were GREAT! I’m not familiar with any of their set…but the set has inspired me to check out more of their material now. The band kept taking digs at Motorhead throughout, since they got a smaller stage at the same time- ‘When we were kids, we dreamed of opening for Motorhead. When we became adults, we never wanted to’.

MOTÖRHEAD: We reached the Motorhead stage just in time to see them wind up their set with Overkill. Lemmy, quite ironically, looked like Hell, and almost like a Carcass. It was great to see him power on and entertain an audience despite his health problems though. Mickey Dee and Phil Campbell were on fire.

SLAYER: Slayer was……..underwhelming. I mean here was Slayer, playing all of my favourite songs, but they just seemed tired and exhausted. Araya’s voice is not aging well. There was a guitar battle of sorts in the middle, which was borderline laughable. But then, in my mind I was thinking, Slayer can go to h…south of heaven, because King Diamond was up next.

KING DIAMOND: Metal perfection. All biases aside, King and Livia are singing better than ever, the band is delivering exceptionally well live, and the theatrics were brilliant (if you know King Diamond lore- King turned the tables on Grandma and burned her at the end of the set specially for Wacken). The two Mercyful Fate songs (Evil, Come to the Sabbath) in the middle of the set were a great addition. When you dream of watching a band live for over a decade, the expectations are HUGE, and every expectation was exceeded.

WASP: I heard just a little of their set, back in my tent, but they sounded awesome.

Other writers would write a concluding note at this point, but screw that. I’m not a real reviewer anyway.