What can be said about a band that has such metal prestige as ACCEPT?! They smashed their way back to the forefront of the metal music scene in 2010 with their storming comeback album “Blood Of The Nations”, along with new vocalist Mark Tornillo. They haven’t looked back since and are one of the hardest working bands in the business, releasing “Stalingrad” in 2012 and new album “Blind Rage” in August this year, to rave reviews around the world.

ACCEPT have been showcasing “Blind Rage” on stage around the world for the last few months, including their very first time playing in Australia much to the delight of the diehard fans there. The band were in London for their show at The Forum on Thursday 27th November, one of the last of this 2014 tour.

I have been lucky to interview original guitarist and mainman Wolf Hoffmann several times before and this time we caught up back stage in the afternoon before the show. Wolf was relaxed and we enjoyed a fun chat, not totally focusing on “Blind Rage” as it has been done many times by now.

Read a few snippets from the conversation below and listen in full on the audio player.

Discussing the state of the world today and its many problems, linked with the song ‘Wanna Be Free’, Wolf expressed his thoughts:

“There’s so much potential catastrophe’s going on right now, it makes you wonder you know, is the world going down the drain or are we just thinking about it more because we hear it so much more. We got the 24 hour news, you always wonder is it really for the better, it never seems to go away.

That song deals with the fact that deep down inside, everybody wants to be free, not just politically. We wanted to look at different aspects of freedom.”

The exciting subject of Wolf working on his next classical album arose, check out what he had to say:

“I’m actually gonna see some people in a couple of days, I wanna do some orchestral overdubs with some string players and hopefully I can do this when I have a little bit of time off in January and February. I can hopefully get some overdubs done then and that the album will be ready next year to be released. It’s 80% recorded – I’ve got most of the guitars, all of the drums, so it’s coming along, just slowly because it’s always taking a backseat to all the other activities you know. When Mama Accept calls, I have to drop everything and that’s number one.”

Talking of the comments that the ‘best is to come’ for ACCEPT, Wolf revealed:

“I’ve always had the philosophy that you should never really think you’ve done your thing and you can sit back and relax. I think you always have to challenge yourself as an artist and try and get better on stage. You should try to write the next best song, a better album next time around and that’s what motivates me. I honestly believe we haven’t written the best song yet and we haven’t played the best show yet.

I think it’s a game where you’re supposed to get better, you know it’s not like  you’re a swimmer or something where you peak in your twenties. I think as a musician, the longer you do it, the better you get – hopefully.” 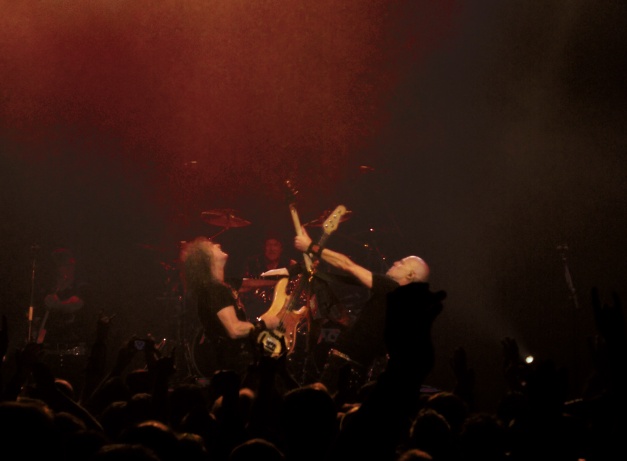 2 comments on “Interview With Wolf Hoffmann, ACCEPT: “I’m working on the new classical””