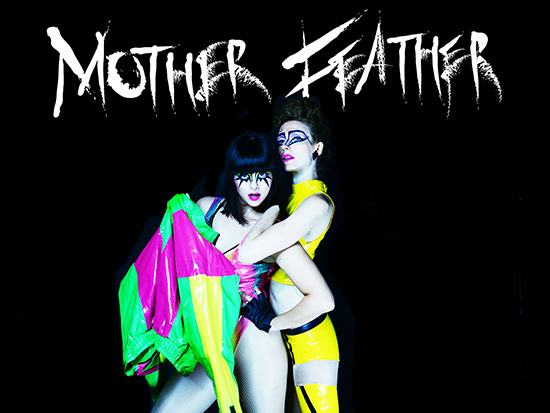 New York City natives MOTHER FEATHER have joined the Metal Blade Records roster! The self-described ‘pop cock rock’ band has been building a loyal following in the late night New York rock scene since their inception in 2009. This fall, fans will be able to see them live during “Pop Cock Rocktober”, the first four Fridays in October at midnight at Rockwood Music Hall, including October 16th as part of the CMJ Music Marathon. For the uninitiated, a MOTHER FEATHER recording can be heard now on teamcoco.com, and a music video can be seen now at ifc.com.

MOTHER FEATHER‘s Metal Blade debut is currently being completed for an early 2016 release, and will feature two new tracks combined with re-mastered versions of the band’s previously released recordings, “Mother Feather” EP (2011), “Living Breathing” EP (2013). New music will be available at the end of September and pre-orders will be online in early December.

The band’s calling card is surely their live show, which has led to consistently sold-out NYC shows. Vocalist Ann Courtney describes their approach: “Where is the magic? Where are the women who rock? Where is the danger? Where’s the cool pop music? Where’s the music that’s not speaking down to its audience? Any time I see any kind of performance I want to have a catharsis, and that’s what I’m hoping will happen when I step out on stage. That’s why I started the band, to save me, and the fact that it’s had this ripple effect and can do the same for other people is just gravy.“

As will undoubtedly be picked up by many of those exposed to the unique record, there is no metal here, per se, which makes for an interesting addition to the Metal Blade Records roster, something that Courtney is thrilled about. “Brian Slagel is such a no bullshit guy. He came to us, said I love what you’re doing, I’m a fan – how can I help? It’s really been such an amazing thing for us to be a part of – and I’m absolutely delighted to think of all the black metal fans in Scandinavia who will think that Brian has lost his mind when they hear a song like ‘Beach House’ or ‘Trampoline.’ I’m looking forward to claiming those souls,” she laughs gleefully. “Hail Satan!“