Posted by tarjavirmakari on October 8, 2015
Posted in: Int. News. Tagged: "Redemption", "The Art of Loss". Leave a comment 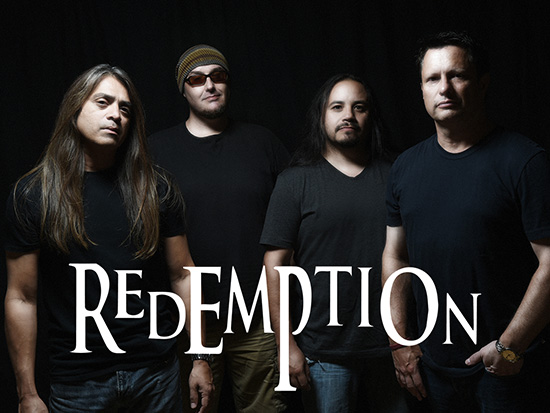 REDEMPTION‘s sixth album, “The Art of Loss”, has been completed and will be released early in 2016 by Metal Blade records. Featuring groundbreaking guest performances from a number of legendary musicians, the CD’s nine tracks contain over 70 minutes of REDEMPTION‘s unique blend of passion, melody, aggression and complexity.

The band recruited several of the finest guitarists in metal to complement van Dyk’s playing. “We’re fortunate to have worked with a number of amazing musicians,” begins van Dyk. “To start with, I’m extremely proud to announce that Chris Poland has lent his immense talent as a special guest on this record, contributing his unique playing on the majority of the songs and elevating our music into extremely interesting territory while calling to mind his work in his previous bands, who need not be named. Additionally, we are fortunate enough to have mind-blowing guest performances from Marty Friedman, Chris Broderick and Simone Mularoni, all of whom are amazing guitarists who add so much to this record.“

In a remarkable and compelling first, the high-octane track “Thirty Silver” features Poland, Friedman and Broderick in the same song – something that will be a special treat for fans of these world-class players.

In addition, REDEMPTION‘s cover of The Who’s classic “Love Reign o’er Me” features a vocal duet between Alder and guest vocalist John Bush. “The combination of Ray’s rich melodic voice and John’s go-for-broke passion on this track really makes it special,” explains van Dyk. “Daltrey’s performance on the original is one of the most iconic vocal performances in the history of rock music and John does it great justice.“

In addition to the nine tracks featured on the US release, bonus editions will be released in Europe and Japan, each featuring alternate versions of selected songs that highlight the guitar performances of Poland, Friedman, Broderick and Mularoni. In addition, the European release will include an additional cover song (A Great Big World’s “Say Something“) which features a vocal duet between Alder and van Dyk’s daughter Parker, who makes her recording debut after having been the subject of several of REDEMPTION‘s songs over the years.

See below for the US tracklisting.

REDEMPTION – “The Art of Loss” track listing
1. The Art of Loss
2. Slouching Towards Bethlehem
3. Damaged
4. Hope Dies Last
5. That Golden Light
6. Thirty Silver
7. The Center of the Fire
8. Love Reign o’er Me
9. At Day’s End

Stay tuned for more details about “The Art of Loss” coming soon!