DEVIL YOU KNOW: Stream ‘Eye Of The Tiger’ Cover Track

Posted by aliblackdiamond on November 3, 2015
Posted in: Int. News. Tagged: 'Eye Of The Tiger', Devil You Know, Nuclear Blast, Survivor. Leave a comment

DEVIL YOU KNOW are currently streaming their critically acclaimed, cover version of the classic “Rocky” movie series anthem track, ‘Eye of The Tiger’. This is a rousing, hard rock rendition to the SURVIVOR hit song and is certainly a must listen. Check it out now at the link below. The track will available as an additional, third instant grat track for all iTunes pre-orders from tomorrow here.

You can find the ‘Eye of The Tiger’ Streaming Audio Link at this location.

John Sankey (drums) states: “One day when we were in the studio working on our new album, They Bleed Red, Howard Jones (vocals) turned up in a shower robe and started shadow boxing in the vocal booth while doing his best Rocky Balboa impersonation. It was so impressive that we immediately knew we had to do a cover of the infamous Rocky soundtrack theme. ‘Eye Of The Tiger’. We had already been discussing the possibility of recording a cover, but had no idea what song we would do. In that moment when Hojo literally transformed himself into the Italian Stallion right in front of our very eyes we knew it was the perfect choice!

“Our biggest challenge would be adapting the original song into our own style, so we decided each of us must take on the persona of a different cast member to best capture the performance necessary to do such an iconic song justice. Howard lived and breathed the role of Rocky for a full week, Francesco Artusato (guitars) became as a slightly shorter Ivan Drago, Ryan Wombacher (bass) was the perfect fit for a modern day Mickey and I of course was a ‘way too Australian’ not quite as ripped version of Apollo Creed. We entered the studio swinging wildly in all directions with our respective instruments and there was blood, sweat and many many tears, mainly of uncontrollable laughter. Hours later we emerged victorious and super slow motion high-fived each other in classic Rocky fashion as we listened back to the sweet metal sounds of a reformed SURVIVOR classic. We hope you all enjoy it as much as we do.”

“They Bleed Red” will be available everywhere on Nov 6th (Nuclear Blast Entertainment) – pre-order from this location.

DEVIL YOU KNOW kicked off their European tour on Hallow’s Eve (Saturday, October 31) in Gothenburg, Sweden. The band will be touring in support of their upcoming second full-length album, “They Bleed Red” and will be accompanied by FIVE FINGER DEATH PUNCH, PAPA ROACH and ESKIMO CALLBOY.

Watch the first making of video in which the band discusses the upcoming album hwere: https://youtu.be/vj_oS_hnNwc

Produced by Josh Wilbur (AVENGED SEVENFOLD, LAMB OF GOD, KILLER BE KILLED), »They Bleed Red« is a breakneck paced trip through DEVIL YOU KNOW’s broken psyche, struggles with anxiety, and ultimate triumph against adversity, all laid upon a foundation of high-level artistic achievement and vitriolic full throttle heavy metal fury. 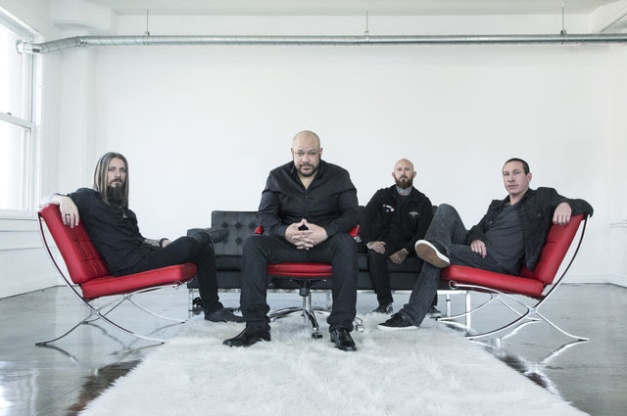