U.S. thrash metal legends FLOTSAM AND JETSAM have inked a worldwide deal with AFM Records. The band’s new album, simply titled “Flotsam and Jetsam” will be released on May 20th. The band have released a lyric video for the track ‘Iron Maiden’, check it out below:

Flotsam and Jetsam is a band from Phoenix, Arizona with a legacy that goes back well over 30 years.  Originally signed to Metal Blade records in the mid 80’s, Flotsam and Jetsam released their highly acclaimed debut “Doomsday for The Deceiver” in July of 1986.   At this time the band consisted of Eric AK Knutson (Vox), guitarists Michael Gilbert and Edward Carlson, and founding members Kelly David Smith (Dr) and bassist Jason Newsted.  Soon after the release of “DFTD”, Newsted left the group to join Metallica shortly after the passing of their bassist Cliff Burton. Shortly after, Flotsam hired bassist Michael Spencer (Sentinel Beast) and continued to tour and write for their next album, “No Place For Disgrace.”
In theory, the band FLOTSAM AND JETSAM started in January 2015 when Eric AK, Mike Gilbert, Michael Spencer, Steve Conley and Jason Bittner got in a room together to start rehearsing for upcoming 2015 European tour dates, and to commence writing for the band’s next record.  Initially the band concentrated on the back catalog and most recent setlists to make sure the touring obligations would be fulfilled, and the band was comfortable playing together.  Soon after, the band focused on it’s writing and started pre-production for the new songs that were taking shape.  After a 5 month initial writing process, the band completed 18 rough ideas to start having Bittner track drums to.  At first the band thought about a double release, but realized it would be better to concentrate on an album’s worth of killer material by what essentially is a new band with a 30-year history.

After picking the final songs, the band compiled some demos to start gathering label and producer interest.  Shortly following summer festivals, a short US tour, and another fall European headline tour, the band finally secured Chris Collier (Prong/KXM) to produce the band’s “return to form”, as well as AFM records to provide the much needed label support that the metal veterans required. 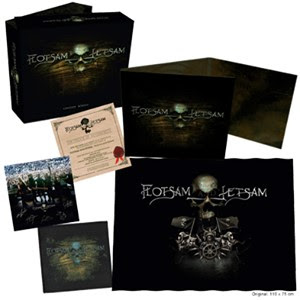 The end result is the self- titled effort “FLOTSAM AND JETSAM” which is the culmination of a year of hard work which shows five very distinct personalities and influences come together for the common goal of creating another soon to be metal classic, as well as another pillar in the foundation of a band that has managed to stay alive and current amongst an ever-changing music scene.

In addition to being available as a digipak CD, the album will also be available as a limited gatefold 2LP edition in black and gold, both limited to 500 copies.

A limited edition boxset (500 copies) will also be released and includes the digipak, a Flotsam And Jetsam flag (official tour backdrop design), patch, printed autograph card, and certificate of authenticity. Order details can be found at the AFM Records Shop. 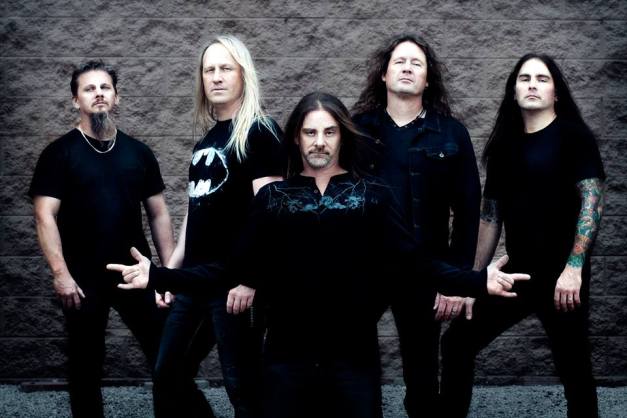