Posted by tarjavirmakari on May 16, 2017
Posted in: News. Tagged: Alpha Omega Management, NORRSKÖLD. Leave a comment 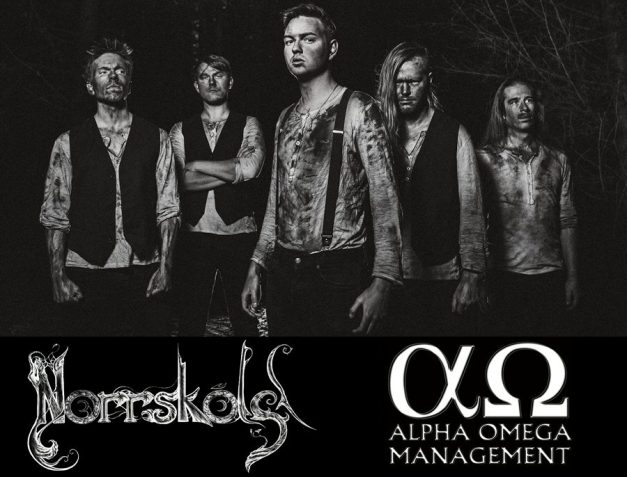 ALPHA OMEGA Management is excited to announce the signing of the “multi-metal” act NORRSKÖLD, hailing from the Swedish metal-mecca, Gothenburg!

Deriving from the cold forests of Sweden, NORRSKÖLD (formed in 2012) has entered the global metal scene to spread a unique metal sound, blending atmospheric black metal with melodic death/folk metal. Both the debut EP “Blessings of winter” (April 2013) and a year later the debut Album “Reflections of the night sky” gained a lot of overwhelmingly good reviews from all over the world. After releasing the EP “Ridden” in April 2015, the band released a new double single “Shores Forsaken” in April 2016, followed by a music video of the title track. “Shores Forsaken” was promoted during an European tour together with the Swedish death metal veterans NIGHTRAGE. In March 2017, NORRSKÖLD released their second full-length album “Withering Virtue – The second chapter” (on Rexius Records), consisting of 12 fresh multimetal tracks and also featuring Marios Illioupolos from NIGHTRAGE as a guest musician. The album is already available in a CD format, and will also be available as a vinyl during the summer of 2017.

ALPHA OMEGA Management adds:
“We’re so thrilled to welcome NORRSKÖLD to our roster family! The band hits hard on stage, delivering a striking “multi-metal” blast, which conquers the audience right from the first sounds! We cannot wait to bring these guys to play near you, so stay tuned, for next announcements!”

Following the release of “Withering Virtue – The second chapter”, Norrsköld has plans of recording a music video during the fall/winter of 2017. The band has already started the process of writing new songs for a new album and the current plan is to initiate the recording of next album sometime during 2018, with a planned release in early 2019.

NORRSKÖLD are for the fans of Dissection, In Flames, Dimmu Borgir, Sacrilege, Amon Amarth.