Gods of orchestral extreme metal SEPTICFLESH released their 10th studio album, Codex Omega, on September 1 via Prosthetic Records. Next February and March, the band will bring their latest auditory onslaught on the road:  SEPTICFLESH is thrilled to announce their upcoming North American co-headline tour with Swedish black metal legends DARK FUNERAL. Support will come from THY ANTICHRIST. Dates are set to be announced soon, so stay tuned.

The band says, “We’re returning to North America in Feb / March 2018 to support our new album Codex Omega, and with us, Swedish lords of the black Dark Funeral will co-bill the event to make it one of the most memorable packages to hit North America in very long time. Also also supporting the tour is Colombian/Texan black metal outfit Thy Antichrist… are you mortals ready? Dates coming soon…” 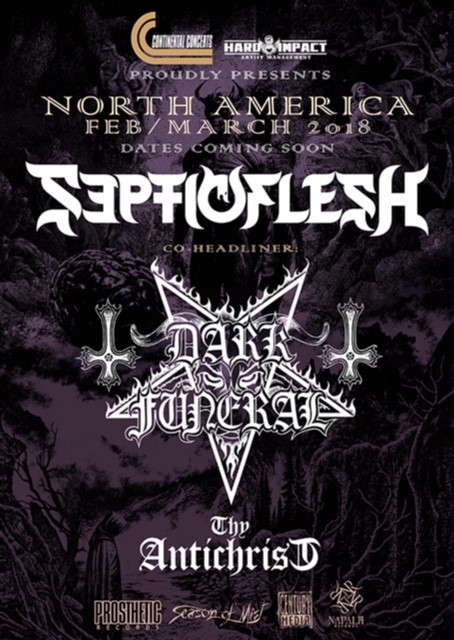 Late last week, SEPTICFLESH released a behind-the-scenes look at the making of Codex Omega in episode one of an ongoing series of exclusive videos. Watch episode one here:

In its first week of release, Codex Omega debuted on several Billboard charts, including #9 on Top New Artist Albums, #12 on Hard Music Albums, #48 on Rock Albums, and within the top 200 on Top Current Albums and Current Digital Albums.

Codex Omega is currently available as a 2-CD set, on purple wax vinyl as well as a US indie retail store exclusive on white wax vinyl, and on all digital outlets.Order here: http://smarturl.it/SepticfleshCO.

Codex Omega was produced by Jens Bogren (Opeth, Dimmu Borgir) and features 10 tracks of their trademark blend of mystical atmosphere, relentless death guitar riffing and pale melodies. Lyrically and musically, Codex Omega is by far the most infernal release from SEPTICFLESH to date. As a bonus, the CD and vinyl LP will come with an extra disc comprised of three orchestral tracks, once again featuring the Filmharmonic Orchestra of Prague.