Death metal legends OBITUARY have shared a brand new music video for “Brave”, the opening track off their critically acclaimed, self-titled 10th studio album. The video, which depicts the band enjoying a day of practice and backyard shenanigans at their home studio outside of Tampa, FL was directed by Shaun Egger and can be viewed below.

Additionally, OBITUARY have announced a month long Spring 2018 European headlining tour. The tour begins March 3 in Cologne, DE and ends April 1 in Schijndel, NL at Paaspop Festival. A full list of tour dates is available below, in the poster.

OBITUARY commented on the tour:

“We are super excited to be back on a headlining tour in Europe. We have had great opportunities as direct support these past few years for Carcass, Cannibal Corpse and Kreator but it’s time to get back to that final slot and the full power of a headlining tour. 45/50mins spots are just not enough for OBITUARY to cover all albums from the past three decades and our fans expect and deserve to see more…and more is what they will get from us on these dates.

We can’t wait to bring our full production and full-length concert to Europe. We will be performing many songs from the Self-Titled and Inked in Blood releases along with showcasing all the classics that everyone loves and is eager to hear.

We are working on the set list right now and want to hear from our fans which songs they want to hear so we encourage you to give us your ideas, thoughts and suggestions.

Hang on to your asses because shit’s about to get real….Real Heavy.!!!”

Obituary is out now worldwide on CD/LP/Digital via Relapse Records. Physical and digital orders plus streams are available now at bit.ly/ObituaryST.

The band’s animated video for the song “Ten Thousand Ways To Die” has surpassed over 1 million views and can be viewed here. OBITUARY’s self-titled album is receiving high end of the year praise charting on notable album of the year lists such as Rolling Stone (#14 – Best Metal), Revolver (#11), Decibel (#14) and Loudwire (#21) among numerous others. 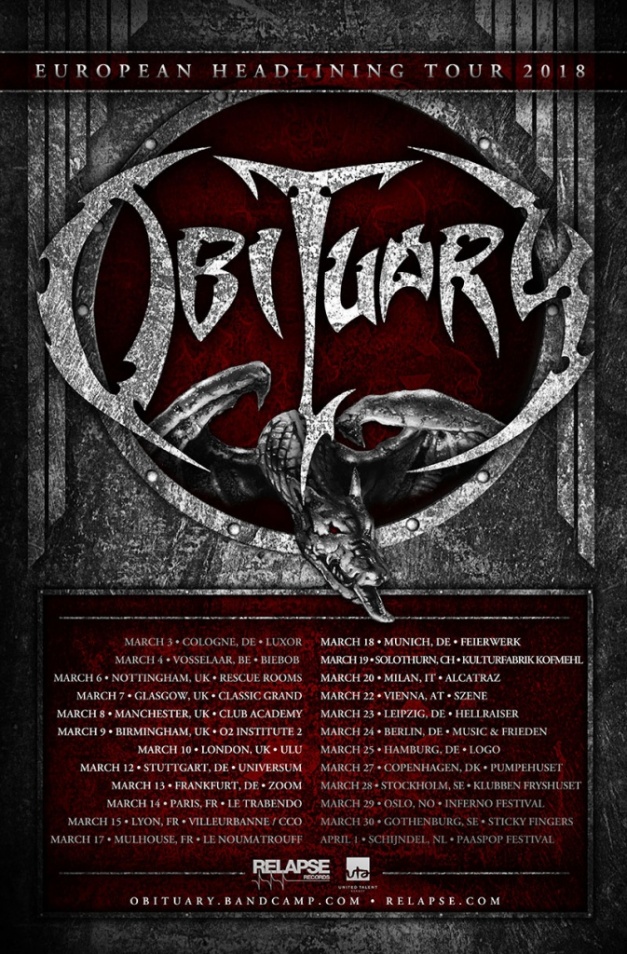