David Ellefson: “MEGADETH is going to honour 1 album per month this year, for our 35 Year Anniversary” 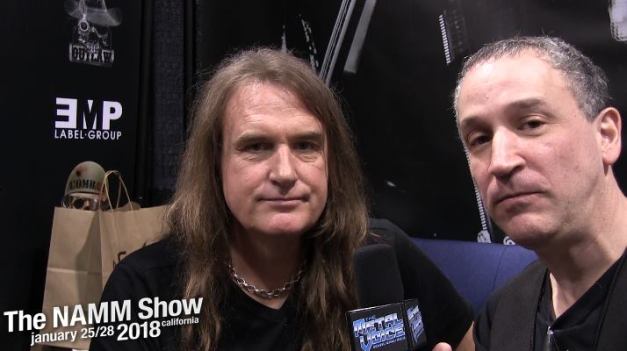 Ellefson spoke about his branded coffee and wine lines, Megadeth’s 35 year anniversary celebrations, his faith and what stage Megadeth is at in regards to writing their next album. Furthermore, The Metal Voice also talked to Operations Director Thom Hazaert about EMP prodcut lines.

When asked why he got into the Coffee business
“Cause I drink coffee everyday, I don’t even play music everyday and so it’s kind of a natural fit. I have been drinking Coffee pretty much my whole adult life. “

When asked about a Megadeth update on future initiatives
“Just this week we announced the 35 year anniversary of Megadeth. That is 15 studio albums. Therefore, we are going to honour an album per month throughout the year, sometimes two a month. This month is Dystopia and So Far. So good. So What? Which both came out in the month of January? We are honouring them by postings and probably in the live shows, we are going to incorporate more of those songs from those albums. There are also some merchandising for fans. Just making a whole extravaganza to thank our fans for giving us 35 years of the band.”

When asked if being public about his Christian faith if it can cause tensions in the Metal genre
“Faith is always a tough thing, quite honestly until I wrote my Autobiography I never did talk too much about it because there is so much prejudice about it. Kind of like watch what we do not what we say is the ultimate testimony of faith belief but you know we are all human. We are under satanic attack of the sinful fallen nature that the bible talks about from the beginning of time. None of us is perfect. I see people fall the hardest when they start to have a little success because human nature is we start to take credit for our success, what I did , rather then what he (God) did. I have been an atheist, Christian, Agnostic and somewhere in between. I got into as serious drug and alcohol habit and when I got sobered up, when I got clean that is when I sort of realized the reliance on a higher power thing.”

When asked what stage Megadeth is in writing a new album
It’s just getting started I’m thinking it’s going to be next year 2019 before we really get anything out but we are working on the album this year that’s the goal in the midst of the 35 year anniversary of Megadeth. We want to take our time and really make a great record. We took our time with Dystopia and that diligence paid off.”