Finnish melancholic progressive metallers AMORPHIS released their enormously successful new album »Queen Of Time«, on May 18th, 2018 through Nuclear Blast. To present their new hymns live on stage, the band is pleased to announce that they will join forces with visionary Swedish metallers SOILWORK for a European co-headline run in early 2019. The band is currently working hard on the follow-up to 2015’s hit album »The Ride Majestic« (Nuclear Blast). The trek will mark SOILWORK‘s first tour in support of their new record. As if this package wasn’t great enough, these headliners will be supported by Ukrainian modern metal outfit JINJER plus German melodic death/doom metallers NAILED TO OBSCURITY, who are working on their Nuclear Blast debut. 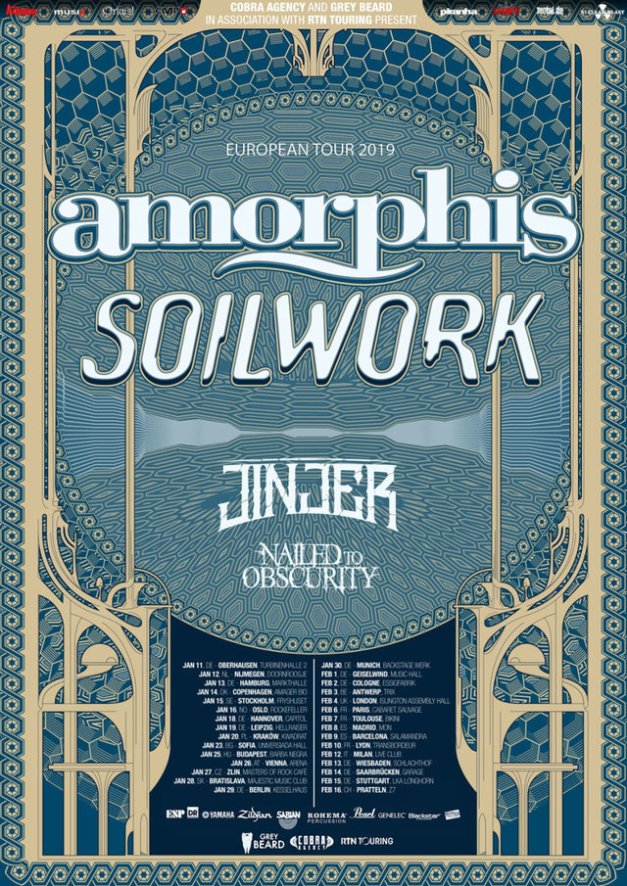 AMORPHIS guitarist Esa Holopainen commented, “We can’t wait to hit the European roads and take the AMORPHIS live production to the next level with the »Queen Of Time« tour. We are really happy to bring the mighty SOILWORK, JINJER and NAILED TO OBSCURITY to this tour as well. Get your tickets now, it’s gonna be a blast from the past!”

Added SOILWORK vocalist Björn “Speed” Strid, “We are very excited about touring with AMORPHIS, as the first tour for our upcoming album. AMORPHIS have been my favorite Finnish band since I was a teenager, when »Tales From The Thousand Lakes« was my daily soundtrack. Both of the bands’ unique take on metal, will create an epic cocktail, as we roll through Europe on tour together. It’s about time, I can’t wait!”

JINJER stated, “We are absolutely thrilled and honored to tour alongside two metal giants such as AMORPHIS and SOILWORK, it’s almost too good to be true! We’ll be bringing our A game and playing some new material as well. Europe, get ready because 2019 is going to get loud!”

NTO guitarist Jan-Ole Lamberti said, “We can’t wait to get back on the road again and we are very excited to be a part of this killer tour package. We are looking forward to seeing familiar faces at cities and venues that we’ve already played in the past, but also to meeting lots of new people at places and even countries we haven’t been to yet. This is going to be great!”