Finnish Power Metal pioneers STRATOVARIUS are currently touring their home country for a few special spring shows. Last Friday night was the turn of Helsinki and the place chosen was no other than Nosturi, one of the most beloved concert venues in the Finnish capital, and which is sadly going to be demolished during this year. What originally seemed to be just one more gig in a career that spans over thirty years, ended up bringing a few nice surprises for their loyal fans. Some people were aware before the show that Timo Tolkki, former guitarist and main composer of the band, had announced in social media that he would attend the show and meet them ten years after his departure.

On this occasion there were no opening bands, so people came just in time for STRATOVARIUS’ show. The room was packed with metalheads of all ages, and as soon as the lights went down we knew we were in for a treat. After a short intro, the band came to the stage and kickstarted the show with ‘Eagleheart’, the overly melodic opening track of “Elements Pt. 1”. I must confess that this is not one of my favorite songs of theirs, but it seems to be popular among the fans. The crowd was as “excited” as you can expect from a Finnish audience, but after a few years living in this country I’ve gotten used to that and it doesn’t bother me anymore. 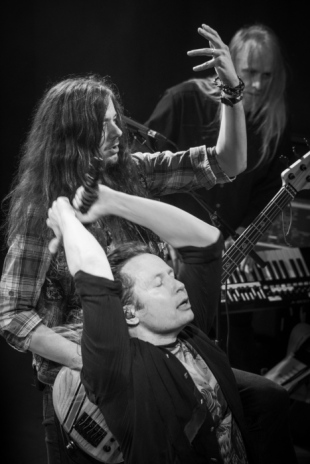 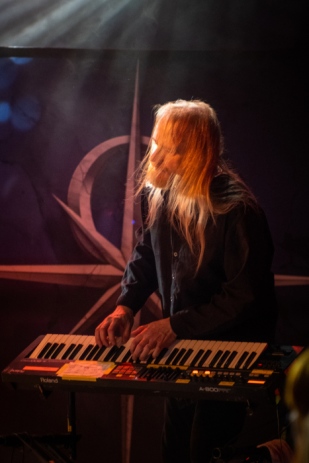 The next in line was the powerful ‘Phoenix’, which was quite a surprise since it hasn’t been part of their regular setlist during the last few years. Frontman Timo Kotipelto used the chance to greet the audience and thank them for coming. It’s amazing how this guy doesn’t seem to age, and although his voice has suffered a bit from all the years on the road, he still delivers some very high notes and manages to captivate the audience. He then introduced one of the new songs included in their latest compilation album “Enigma: Intermission 2”. I’m talking about ‘Oblivion’, a slower yet effective tune which features a more modern sound, and which was received with respect and approval by the crowd.

‘Shine in the Dark’ is one of their most recent hits, with quite good airplay till these days. The great vocal work of Kotipelto supported by Matias Kupiainen and Lauri Porra’s backing vocals, made this of the highlights of the first part of the set. Then they jumped back to 1998 with ‘SOS’, another deep cut that I wasn’t expecting to hear. The catchy melody of recently released ‘Enigma’ was performed for the first time in Helsinki, and with great results. At this point we have to say that although only two of the current members were part of the classic STRATOVARIUS line-up, Kupiainen, Porra and drummer Rolf Pilve have injected some fresh blood into the band.

One of the first special moments of the evening came with ‘4000 Rainy Nights’ preceded by a beautiful guitar intro by Kupiainen and followed by an innovative bass solo by Porra. This song brought me back to my teenage years, when I discover STRATOVARIUS for the first time in the early 2000’s. They continued with more material from “Destiny”, no other than the ten-minute epic title track, full of contrasts and succeeding at creating a mystic atmosphere. Then it was time for maestro Jens Johansson to shine in the keyboards and indulge us with the first chords of ‘Black Diamond’, one of their all-time classics that the crowd sang at the top of their lungs. The band leaves the stage for a little break.

The encore started with the lovely ballad ‘Forever’, which was the only reference to their masterpiece “Episode”, and which always proves to be a special moment of their show. But the greatest surprise of the evening would happen next, when they invited former drummer Jörg Michael to join them onstage and delight us with an unforgettable version of ‘The Kiss of Judas’. Although they didn’t have a lot of time to rehearse, the German powerhouse did not disappoint and seemed very happy with his fellow bandmates after so many years. A historic moment that we we’re lucky to witness. Rolf Pilve came back to the drumkit to perform the infectious ‘Unbreakable’, another of their latest radio hits taken from 2013’s “Nemesis”. 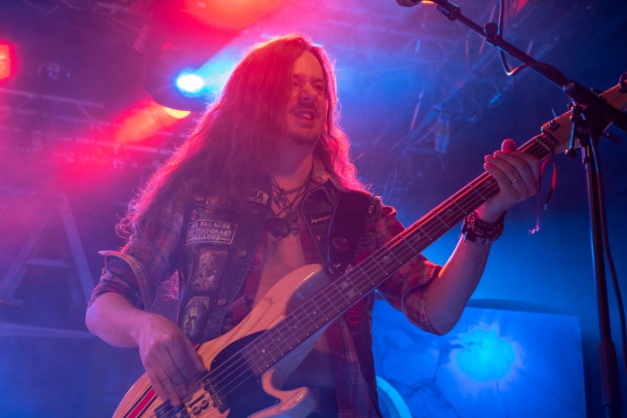 As usual, they closed the concert with ‘Hunting High and Low’, arguably their most successful song, one that features all their trademark elements and allows them to interact with the audience. After one and a half hours of majestic virtuosity, the local heroes left the stage for good with an overwhelming ovation. The band seemed very moved by the reaction of the crowd and later shared some pictures with Timo Tolkki and Jörg Michael backstage. For the first time in over a decade, four fifths of the classic STRATOVARIUS line-up shared the same room, with only bassist Jari Kainulainen missing. Apparently, some scars have slowly started to heal, opening a little hope for a possible reunion in the future.

To see all the show photos by Ricardo Santos, go here!