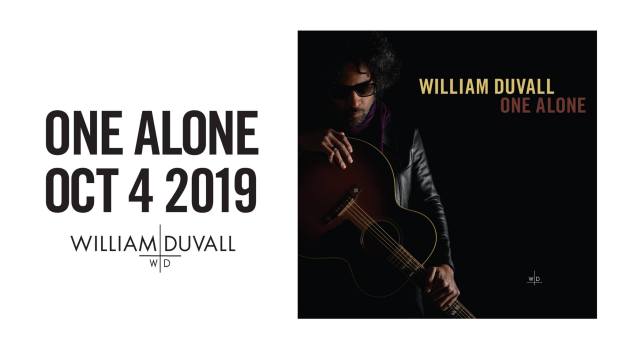 ALICE IN CHAINS’ Vocalist WILLIAM DUVALL will release his first solo album ‘One Alone’ on October 4th, furthermore he has announced the USA solo dates, see below the confirmed shows.

William DuVall’s first solo album, One Alone, is a smoldering, all-acoustic affair. In contrast to the multi-layered sonic assault comprising most of his discography, One Alone is as sparse and intimate as it gets – part late-night confessional, part living room concert. As William describes it, “I felt the need to peel everything back. This album is strictly one voice, one guitar. It reveals the very core of who I am as a singer, guitarist, and songwriter.” The album’s first single, ’Til The Light Guides Me Home’, is a song of redemption in the wake of tragedy.

“’Til The Light Guides Me Home, is formed around a delicate and warm guitar pattern, with Duvall showcasing vocal strength in this newfound direction.“ – Stereoboard

Inspired by a family break-up, ‘Til The Light… also hints at the larger implications of a planet seemingly descending into chaos. See the video here:

The reaction to the album has been overwhelmingly positive – calling the record a respite from a lot of the music coming out these days and a pleasure to play over and over. DuVall’s recent appearance on Cheddar’s Between The Bells to discuss ONE ALONE can be seen at this location.

And many more to be announced!