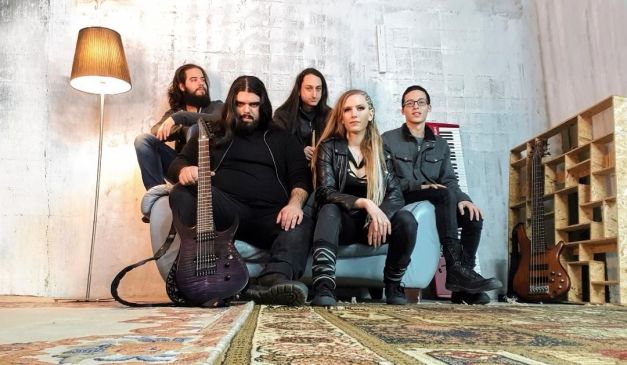 The acclaimed Israeli progressive / symphonic metallers SCARDUST – whose recently reissued full-length debut “Sands of Time” was hailed by Prog Magazine as “extraordinary” – have unveiled a new taste of what to expect on the follow-up recording that they’re currently prepping for a fall 2020 release.

At the band’s recent, sold-out Scarfest in their home city of Tel Aviv, the group debuted the new song “Tantibus II”, complete with backing vocals by the 12-person “Hellscore” choir. Professionally filmed live footage of the song – which showcases the band’s impeccable musicianship and the diverse range of vocalist Noa Gruman, who Prog aptly praises for “vocal gymnastics that flip between elegant soprano and guttural demon in a split-second” – here:

Says Gruman, “Scarfest was a magical evening, and our full-length set with the Hellscore choir featured several songs from our upcoming album. ‘Tantibus II’ was one of them, and it’s now released for the world to see as a teaser for what’s to come.”

“Tantibus II” is a sequel to “Tantibus,” a song from the group’s 2015 debut EP “Shadow.” It further explores a common theme scattered throughout SCARDUST’s music – the human desire to escape from reality. In its lyrics, sleep is used as a metaphor for the things that we do to detach ourselves from our day-to-day routines. The demon described in the song is the Old Hag, the villain in a fable about a supernatural creature who sits on dreamers’ chests and strangles them. The tale relates to a phenomenon called sleep paralysis, in which dreamers are struck with great fear and a feeling that they cannot wake up.

The “Shadow” EP was included on the limited-edition gatefold 2LP edition of “Sands of Time,” which is available at www.m-theoryaudio.com/store. The CD reissue of “Sands Of Time,” meanwhile, included an acoustic demo of another new song, “Mist,” that the band plans to include on their forthcoming sophomore album. The song can be streamed at this location.

SCARDUST have previously played alongside the likes of Symphony X, Therion and Epica and performed a number of high-profile international gigs in 2019, including the Midi Festival (China), Ramblin’ Man Fair (United Kingdom) and Metaldays (Slovenia).