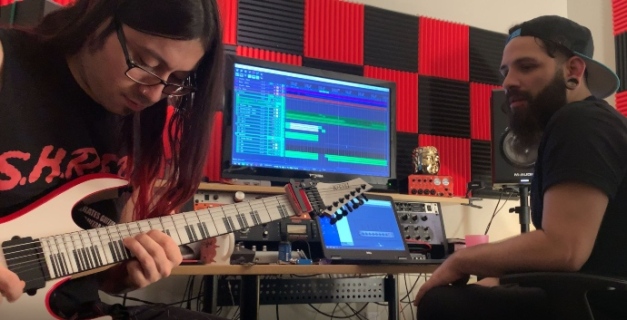 The virtuosic “super metal” group IMMORTAL GUARDIAN – hailed by MetalSucks as “seriously epic” – have started recording the follow-up to their acclaimed 2018 sophomore album (and M-Theory Audio debut) “Age of Revolution.” A fall release is expected.

For the new album, IMMORTAL GUARDIAN has once again enlisted the expertise of “Age of Revolution” engineer Joshua Lopez to assist with the tracking of the album. With the majority of parts recorded at the band’s new Las Vegas headquarters and drums being tracked remotely in Montreal by recent addition Justin Piedimonte, it made for an interesting workflow between band members and engineer. Amidst the obstacles of distance, the group prevailed and made something truly unique and representative of themselves and the current state of the world.

Says Brazilian-born vocalist Carlos Zema, “This is a very different album from our previous releases in that there’s a wide range of emotions involved. We’ve experienced our fair share of loss since the last release and a lot of life lessons were poured into this album, giving it a very real and personal vibe. From a technical vocal aspect, this is the first album I’ve ever recorded where I’ve spanned five octaves as a singer, and I’m excited for the world to hear the message and sound we’ve created together as a group.”

Adds guitarist/keyboardist Gabriel Guardian, “The recording process has been interesting to say the least. Working with a drummer over 2,000 miles away has its obstacles, but Justin and his drum engineer Jesse Zito made the experience way smoother than we imagined. Thanks to technology, video calls and hundreds of back-and-forth messages, we pulled off something that wouldn’t have been possible years ago. We’re incredibly proud of the new material and are looking forward to wrapping up the final mix with Joshua and getting some new music out for all the Guardians to hear!”

In 2018 and 2019, IMMORTAL GUARDIAN dropped jaws during national tours with Marty Friedman and Exmortus, where the extreme progressive/power metal group showcased virtuosity that’s second to none. The band also made waves with their must-see, special effects-heavy music video for “Stardust,” which combined the action-packed narrative of “Armageddon” with a telenovela-worthy love story.

IMMORTAL GUARDIAN will return to the road this spring, when the band will support PowerGlove on a six-week North American tour. The trek will see Gabriel – who performed impressive live guitar/keyboard demonstrations for Peavey throughout the recent NAMM convention – perform with both bands, as he’s done in the past when the two groups have shared stages.