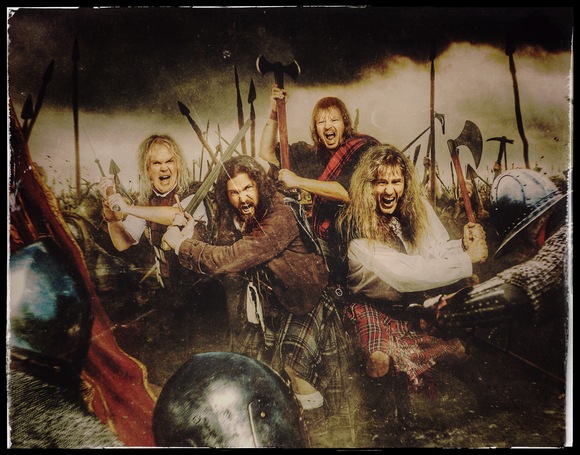 This year marks 40 years of one of the most influential and pioneering bands of the German heavy metal scene: May 29th 2020 will see metal titans, GRAVE DIGGER, release their 20th studio album on Napalm Records, and their 40th band anniversary will be celebrated in the most glorious way. With their brand new album, Fields Of Blood, the band around charismatic frontman Chris Boltendahl continues their iconic, Scottish Highlands story!

Fields of Blood is the logic consequence of a legendary trilogy and an auditory battle of unique traditional metal. The album will take us on an emotional journey through Scottish history and into explosive sound landscapes. Driving riffs and epic choruses meet the famous “Great Highland Bagpipes”: In the Highlands, the battlefields of Stirling, Bannockburn and Culloden, the listener will find himself on a rollercoaster between grief and triumph again, suffers and wins with the Scottish freedom fighters. After “The Clans Will Rise Again” and “Tunes Of War”, Grave Digger close their Highland saga in glorious style. Just recently, the band shared a first single, “All for the Kingdom”, a mercilessly epic track and heavy metal masterpiece that shows the direction of the new Grave Digger album in perfection ( watch the video HERE! ).

Today, Grave Digger are presenting a very special highlight and the second single of the album: “Thousand Tears“ features the incomparable voice of Noora of Battle Beast, refining the most touching metal ballad of the year in a duet with Chris Boltendahl! An unforgetable moment of Grave Digger ‘s apart from that heavy new album Fields Of Blood, and escapes the listener into a melancholic dream, sweetened with a high class vocal melange and an outstanding instrumental arrangement.

Says Grave Digger frontman, Chris Boltendahl:
“With Thousand Tears we pay homage to the unforgettable Queen of Scotland Mary Staurt … Noora from Battle Beast gives Queen Mary an incredible, warm and fragile atmosphere through her voice which at the end of the song turns into pure anger and despair.We couldn’t have found a better voice for this song. We are proud to present THOUSAND TEARS feat. NOORA LOUHIMO. One of the best ballads Grave Digger has ever written, maybe the best of our entire career.”

Noora adds: “It’s an honour to do a collaboration with the legendary Grave Digger and I’m very intrigued about the Scottish themed songs they’ve done. Now I will also be part of their historical song ”Thousand Tears” as the voice of Queen Mary. I hope all listeners can hear the big emotions and get a little climpse of her story as one of most Powerful woman that lived in her time.“

Listen to the ultimate heavy metal ballad of 2020 and watch the new video for “Thousand Tears“ HERE!

Even 40 years later, the ethos of the band has not changed, and yet Grave Digger sound modern and timeless like never before. They still stay true to their no-frills traditional brand of metal with unwavering pure steel, which nevertheless offers surprises, and celebrates such a special anniversary of one of the most successful German heavy metal pioneers in the most glorious style!

Fields of Blood Tracklisting:
1. The Clansman’s Journey
2. All for the Kingdom
3. Lions of the Sea
4. Freedom
5. The Heart of Scotland
6. Thousand Tears
7. Union of the Crown
8. My final Fight
9. Gathering of the Clans
10. Barbarian
11. Fields of Blood
12. Requiem for the Fallen

The album pre-sale is available at THIS LOCATION!