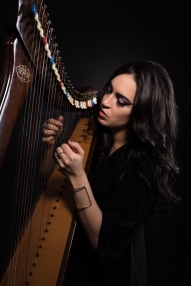 Juno nominated artist Lindsay Schoolcraft (Ex-Cradle of Filth) is pleased to announce that she has teamed up with Gaia Guarda of symphonic metal band Uriel to release a new track called “I Didn’t Break”. The song is only available via Gaia’s Crowdfunding page for her album Anatomy of Fear and you can get it if you spend $10 or more on the campaign..  The track also features Rocky Gray (Ex Evanescence). You will receive the track after May 4th.

Lindsay commented “If you’re a fan of electronic music this song is totally for you! It reminds me of my favorite sub-genres like Trip-Hop, Darkwave, Witch House, and even Neo-Classical!

Rocky Gray (Original Evanescence Drummer) has also done the beats for her debut album and Tyler at Monolithic Productions (My Producer) is the producer as well. This album includes live strings and I really can’t wait for it to be done so I can finally listen to it myself.

It was an honor to finally work on a song with Gaia since we have been wanting to do so for almost a decade now.”

Get the song/Album here: https://www.indiegogo.com/projects/gaia-guarda-s-debut-album