Posted by tarjavirmakari on June 11, 2020
Posted in: Int. News, News. Tagged: "Dead Sister", 'The Call of the Iron Peak', THE DEVIL'S TRADE. Leave a comment

Dark folk project THE DEVIL’S TRADE will be releasing the sophomore full-length ‘The Call of the Iron Peak’ on August 28 via Season of Mist, making its debut to the label. The project is the brainchild of singer/musician Dávid Makó. The emotional first single “Dead Sister” is out now and can be heard at THIS LOCATION.

Frontman Dávid Makó comments on the track: “The muse for this piece was probably the biggest storm cloud I have ever seen covering the perfectly clean summer night sky. I was sitting right under the eye of the storm on a plain somewhere in the Hungarian countryside. It was like sitting under a gate to another ancient world. The world went silent the air stopped and I was waiting to be smashed by the elements. For about twenty minutes it felt like I was connected to the otherworld. Then a cool wind came and blew it away. The sister part is too personal. It took thirty years to understand that someone I never met has such a powerful influence on me. If there is an afterlife I hope she will be there and I can hug her.”

‘The Call of the Iron Peak’ can be pre-ordered HERE.

Guest musicians:
Márton Szabó, Péter Szabó on drums,
Adam Vincze on spoons and jug in ‘The Call Of The Iron Peak’
Rita Szabó, Kornél Szabó on triangulum in ‘Dead Sister’

The stunning cover artwork of ‘The Call of the Iron Peak’ was created by ‘Grindesign’ (BENIGHTED). 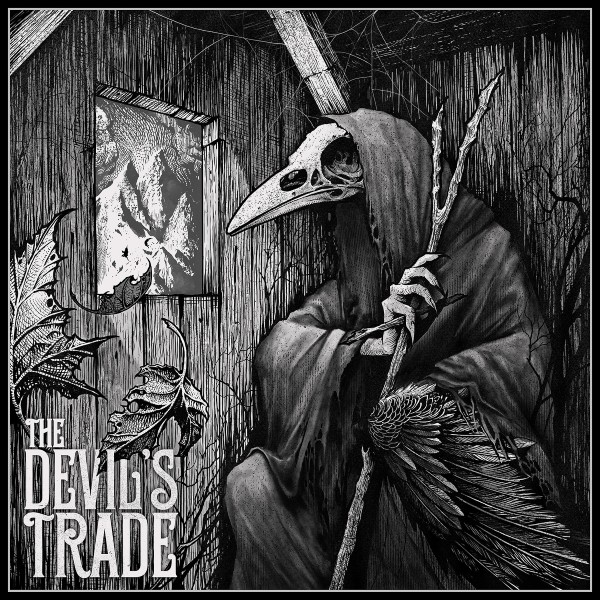 THE DEVIL’S TRADE earlier announced the rescheduled dates for the previously canceled tour with DARKHER and FORNDOM. A full list of confirmed dates can be found below.