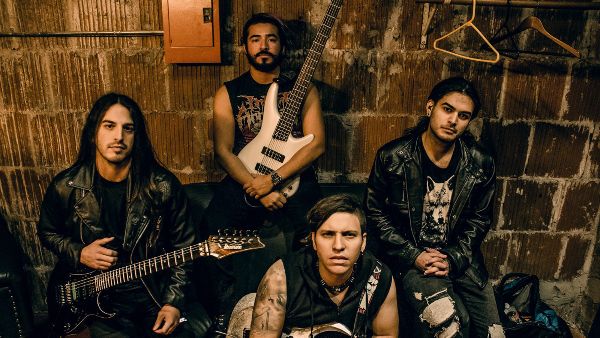 Progressive thrash-metal jedis SIFTING have partnered with PROG to premiere a new playthrough video for the song “The Fifth Element”. The song is a finger-twisting instrumental written in 5/4 time full of quintuplet figures, and clocks in at over seven minutes long! Watch it right now exclusively via PROG Magazine.

The video was directed by guitarist/vocalist Eduardo Gil and filmed at the Sifting Compound in North Hollywood, CA. “Aside from this song being completely written in 5/4, it’s an instrumental” says guitarist Richard Garcia. “We like our instrumentals to be technical, and while writing them we push our own abilities. Lots of the parts were written before we could even play them, so we kind of forced ourselves to be better by setting the bard far beyond our abilities at the time. In this song there are unique drum patterns, riffs, and shred techniques all being played in an odd meter. We thought that the best way to show everything going on in this song, was to shoot a video that features (in our opinion) the best and most technical moments.”

The Infinite Loop was released on September 27, 2019 via Eclipse Records. It was produced by Steve Evetts (The Dillinger Escape Plan, Suicide Silence, Poison the Well), mixed by Jamie King (Between The Buried And Me, The Contortionist), and features a special guest performance by Derek Sherinian (Sons of Apollo, Dream Theater). The album has received overwhelming critical acclaim from the likes of Metal Injection saying “The Infinite Loop solidifies Sifting as a truly worthwhile up-and-comer (8/10)”, Blabbermouth.net who says “more bands like Sifting please (8/10)”, Metallum Subterra adding “The Infinite Loop is a masterpiece! (10/10)”, as well as SiriusXM Liquid Metal, and many more.

Sifting have also revealed four previous music videos from the album for the songs ‘A Critical Affair‘, ‘Stop Calling Me Liberty‘, ‘Enough’, and ‘Emotionless Shells’. Watch all the music videos right now at this location.

Get the album on CD, download, or stream it at https://ffm.to/sifting