Last month, French alternative rockers TRANK released the video for their first single ‘Chrome’, taken from their upcoming debut full-length album, “The Ropes” due for release later this year.

Now the band has unleashed the first two parts of the ‘Making of… Chrome’ videos, replying to the question ‘What is Chrome about?’.

TRANK on new single and video:
“The song is a tribute to the band’s biker friends: the lyrics are a “prayer” (of sorts) in celebration of their love of freedom and the open roads, and the music is quintessential TRANK – high-power alternative metal blended with post-punk electronics into an intense, irresistible ride. The video was shot during the band’s breakthrough live performances opening for such major acts as Deep Purple or Anthrax in Eastern Europe, after their early singles caught the attention of both giant acts – as well as Disturbed and Papa Roach. Recorded in France with band co producer and seasoned recording engineer Yvan Barone, the song was mixed in NYC by Bring me the Horizon and Asking Alexandria engineer Brian Robbins, and mastered – also in NYC – by Andy VanDette, of Porcupine Tree fame. “Chrome” is taken from TRANK’s first full-length album, “The Ropes”, due for release later this year – more details to follow. Many thanks again to the fantastic crowds in Riga and Moscow who supported us as well as they did (with a nod to our friends and audiences in Bucharest, Kyiv, Vilnius and Lyon – you’re not in these shots but your time will come !) – we hope you enjoy seeing yourselves on screen 🙂, at least as much as we enjoyed playing for you.” 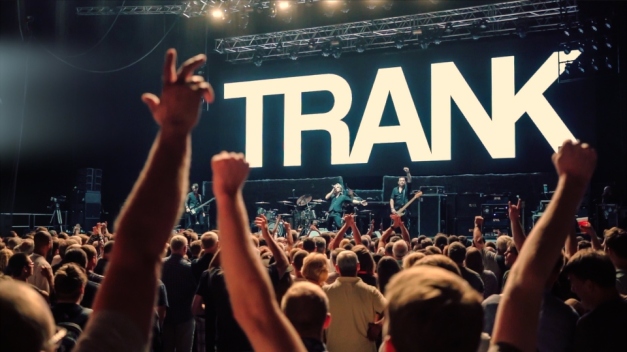 TRANK are a fully independent band from France, whose unique brand of arena-friendly rock blends alt-metal and post punk influences into an emotionally charged, furiously contagious, richly powerful sound. Their independently produced 2018 – 2019 singles and videos got them the attention of such giants as Deep Purple, Anthrax, Papa Roach or Disturbed, who all offered them support slots – to overwhelming crowd response. The band are currently working on their debut full-length album, scheduled for release in 2020. More details will be unveiled shortly.

About TRANK’s sound.
A contagious, intense, raging brand of rough-as-rock introspection. Or, as they half-jokingly describe it, “like silicium : not metal, but just as hard.” TRANK want “to make you jump AND think at the same time” : their music blends infectious, propulsive, angry energy, with a more seasoned lyrical look upon life and its trials than you’d expect from a band that sounds this powerful. Their songs capture the sort of world-weariness, cynicism and empathy that only comes with living a little – before you song- write; but their sound brings those feelings to life with irresistible drive and cathartic flamboyance. A combination which very much defines their identity – between alternative metal and post-punk…. And has attracted attention from no less than Deep Purple, Anthrax, Papa Roach and Disturbed, all of whom have chosen TRANK as their opening act in major concert arenas across Europe.

Read below what DEEP PURPLE and ANTHRAX say about TRANK:

“If we started in the 21st century, our music would probably sound very similar to TRANK.” – (Deep Purple, 2018 – after choosing TRANK as their opening act)

“They don’t play metal, but what they play is very cool and metal fans will love it”. – (Anthrax’s management, 2018 – after choosing TRANK as their opening act)