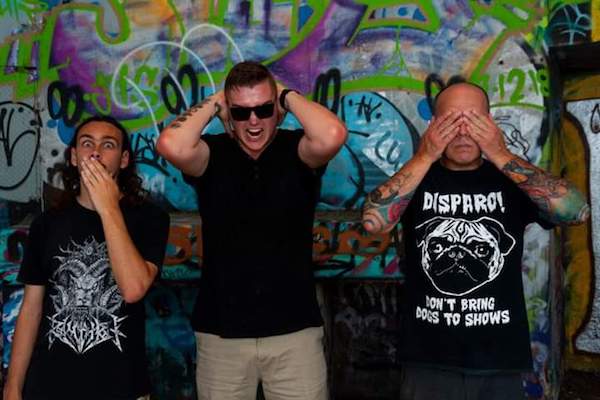 Hands down one of the best punk bands in Australia at the moment, I HATE PEOPLE signed to Riot Records in late 2019.

Their new single ‘You’re a F**king $hitcu**t’ show the 3-piece totally on fire. Hammering out a metallic thrash punk sound that echoes of legends like Motorhead, Discharge and The Exploited, I HATE PEOPLE will appeal as much to the metal crowd as they will punk fans.

‘You’re a F**king $hitcu**t’ unites key elements from both genres and  I HATE PEOPLE delivers a fiery defiance and goal to destroy everything in their way.

ABOUT I HATE PEOPLE

I HATE PEOPLE are a 3-piece thrash punk band from Newcastle, Australia who make music for people that hate people. I HATE PEOPLE formed in July 2018 from the ashes of a couple of Newcastle bands & played their first gig on Christmas eve 2018 at The Hamilton Station Hotel. Since then, the band has been playing gigs all over Australia’s east coast. Racking up 30+ gigs in their first year, the band has played with some of the country’s best punk & metal bands and also supported legendary Japanese punk band The Jetboys on their recent Australian tour.

“We want everyone in this world to know who I Hate People is & what we’re about. It’s time for a new world order, one of Punks & Metal heads & we’re ready to lead the charge. Punk’s not f*cking dead!” – I HATE PEOPLE

“Punk can become a brand and some bands fight to keep it real. Punk should be anti-establishment and make people listen but have lots of fun doing it. I Hate People are the punk band for a new generation who want to say a big f*ck off to the bullshit politics that run this world” – Uncle Les Talks Music