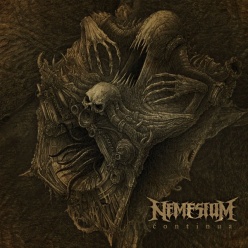 NEMESIUM‘s new album “Continua” has entered Australian independent album charts at #1 after the first week from its release, out via Black Lion Records! Order the album here.

On Continua, the Australian Nemesium continue the trajectory begun on the Sentient Cognizance EP, both musically and as a continuation of the dark science fiction horror begun on that initial release. The quintet from Down Under, having risen from the ashes of several earlier metal bands, burst forth near fully formed on Sentient Cognizance, but it is on Continua that the evolution is complete. In this latest evolution, Nemesium present an essentially perfect blend of modern Death Metal, Second Wave Black Metal, hints of the Stockholm Sound, and even traditional Heavy Metal. Riffs ranging from emotionally weighty to outright feral sit comfortably within the bleak, roiling atmosphere of terror call forth by the band. Allow Nemesium to transport you into the void. These are the premium, First Class tickets.