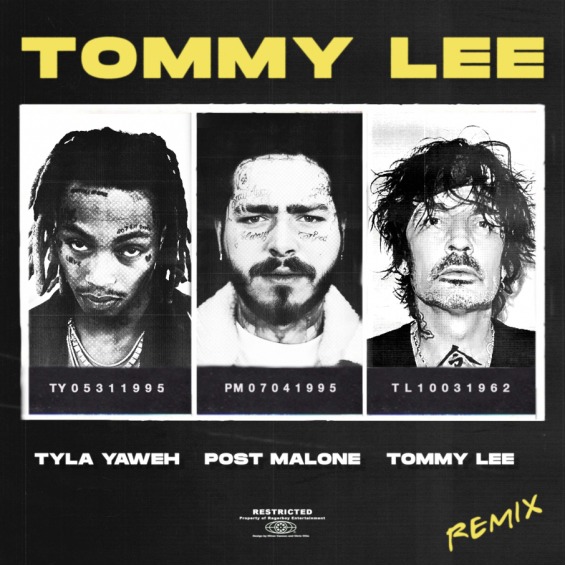 The recording for the remix of the critically acclaimed track was done at Tommy’s Atrium studio, with production handled by Tommy Lee along with his son Dylan.

Tyla came to the studio, bringing an amazing energy to the process (as seen in the video for the remix). Lee called in close friend John 5 (Marilyn Manson/ Rob Zombie) to play guitar and bass in order to give the remix the crunch it needed.

“I’m excited to be releasing records with my idols,” says Tyla. “I first had Billie Joe Armstrong clear a sample for me and hop in my last video with Wiz Khalifa. Now I’ve got a legendary track with this bad ass Rockstar Tommy Lee and my brother Post Malone. This track is so special to me!!!

“I was humbled that Tyla and Post chose to name a song after me. I couldn’t wait to get my hands on it with them and give it my spin. We had a blast! They are the new rockstars! I love them both!” says Tommy.

“Tyla Yaweh is undoubtedly on the precipice of stardom…On ‘Tommy Lee,’ Yaweh connects with his big homie for the guitar-laden anthem, which pays homage to the ’90s rock legend.” – Billboard

“…this collaboration with Malone feel[s] so seamless…” – Complex

“…[a] rising charismatic artist…Influenced by artists from Jimi Hendrix to Lil Wayne, Yaweh, whose love of fashion doesn’t go unnoticed either, brings together his love for hip hop and rock organically.” – The Recording Academy

“Hands up if your 2020 bingo card had a member of Mötley Crüe releasing the year’s most galvanizing electro/hip-hop record. However, that’s just what Crüe drummer Tommy Lee has done with his explosive new solo album, ANDRO.” – ALTERNATIVE PRESS

““Knock Me Down” is a rock-rap banger featuring Bay Area vocalist Killvein who channels a dark Marilyn Manson-meets-DMX vibe for the song.” – OC REGISTER