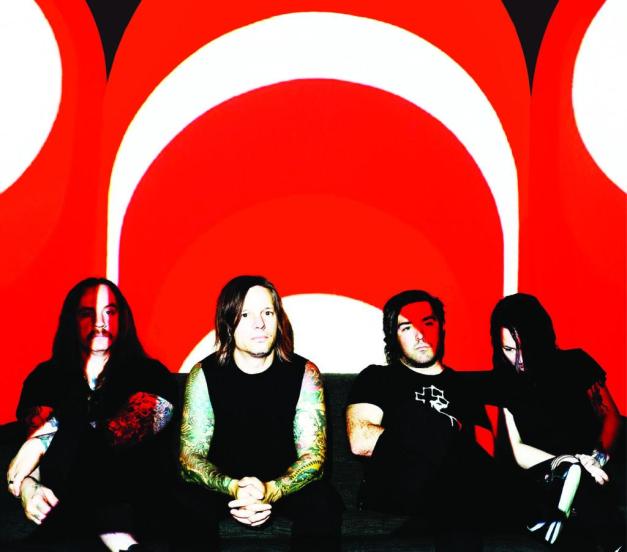 Now available on all streaming platforms, guitarist Anthony Paganelli comments of the track, “During our Fever Dream recording sessions, we decided to record a few cover songs. Alice Cooper’s ‘School’s Out’ being one of them. We all love ’70s rock and it’s a big influence in our songs and songwriting. ‘School’s Out’ is a bad ass song and that main riff is so catchy and super fun to play. We jammed on it a few times and decided to record it. The other cool thing about recording this song is that we all did vocals on it. All four of us sang. I even had my kids do the yelling part at the end. They thought it was cool to go in the studio and yell into a microphone a few times. But then again, who doesn’t.”

Stream HORSENECK’S cover of “School’s Out” at THIS LOCATION.

View the band’s previously released videos for “Margaritadelphia” (featuring a guest appearance by Deftones’ Abe Cunningham) and “Matt Lauer’s Secret Button” from their Fever Dream full-length at THIS LOCATION.

Fittingly titled, HORSENECK‘s eleven-track Fever Dream shifts seamlessly from spatial distortion, to specific detail, trying to navigate a nightmare of an existence with the grace of a butcher knife. Fever Dream is driven by the darkness and uncertainty of the world. You can hear it in its melodies, lyrics, and unorthodox use of horns and keys all throbbing under the weight of its own sonic psychosis.
Engineered by the band’s own Lance Jackman at The Dock in Sacramento and mixed and mastered by Eric Stenman (Will Haven, Far, Weezer) at The Appliantz Shop in Encino, the record includes guest vocals from Grammy nominated rock ‘n’ roll pioneer Gary U.S. Bonds and indie rock/folk hero Jules Bee (Baenziger) from Sea Of Bees.
Fever Dream is out now on vinyl and digital formats. For orders, visit the HORSENECK Bandcamp page at THIS LOCATION where the record can be streamed in full.
Featuring former Will Have guitarists Anthony Paganelli and Lance Jackman, current Chelsea Wolfe drummer Jess Gowrie, and bassist Lennon Hudson, HORSENECK released their critically lauded debut length album, Heavy Trip, in February of 2017. At once heavy, pummeling, psychedelic, and introspective, the record drew comparisons to the likes of The Melvins, Queens Of The Stone Age, and Red Fang. On their latest output, Fever Dream, HORSENECK has taken their songcraft to a far deeper, darker level. Incorporating a more democratic approach to the songwriting process, all four members contributed to the music and lyrics. The band spent over a year writing and refining songs until the finished product was something somber, heavy, and experimental.

Posted by tarjavirmakari on May 16, 2020
Posted in: Int. News, News. Tagged: Alice Cooper, Don't Give Up. Leave a comment

ALICE COOPER has released a brand new song “Don’t Give Up”!

“It’s a song about what we’ve all been going through right now and about keeping our heads up and fighting back together. Tag an essential worker to share this message and remind them that we’re in this together. Don’t Give Up!”

Watch the video “Don’t Give Up”

A strictly limited 7” Vinyl Picture Disc will be released on August 14th, 2020. You can pre-order the vinyl very soon, until then stream and download the track here: https://alicecooper.lnk.to/DontGiveUp 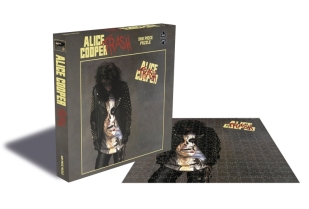 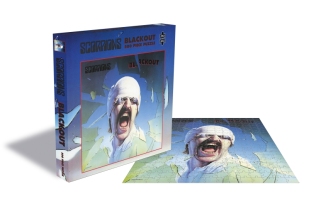 Zee Productions will release two classic SCORPIONS album covers, “Blackout” and “Lovedrive”, two classic ALICE COOPER album covers, “Welcome To My Nightmare” and “Trash”, and three classic STATUS QUO album covers – “If You Can’t Stand The Heat”, “Rockin’ All Over The World’ and “Quo” – as a 500 piece jigsaws, in April 2020, on Zee Productions imprint Rock Saws. The iconic arts of some of Rock’s most influential and highly regarded albums is presented in puzzle form for the first time ever. All puzzles come in a vinyl box set sized box, perfect to fit alongside a vinyl record collection.

The “rocked up” version of John Farnham’s 1986 global smash hit is the brainchild of DJ Wyatt Wendels with Toby Jepson, of Wayward Sons and Little Angels fame, producing the track.

Recorded by the Planet Rock All-stars band at Vale Studios in Worcestershire, rock royalty feature on the new charity single, including:

‘You’re The Voice’ will be released digitally on Friday 6th December, while a limited-edition CD version costing £5 will be available to buy throughout Wyatt’s epic 2000 mile Road 2 Rockstock 2 cycle trek.

Set to be premiered in due course, all proceeds from the single will go directly to mental health charity Mind.

A glutton for punishment, this time around Wyatt will be covering 2000 miles in 2 weeks, visiting landmarks and famous music venues on the way, whilst averaging 135 miles a day for 15 consecutive days. He hopes to raise more than £75,000 for Mind.

Sponsor Wyatt and donate to Mind via JustGiving.

“It is amazing how a simple thought can just snowball into something so big! I knew I was going to do another Road To Rockstock, and again for a mental health charity and so I had the idea about the possibility of recording a song that had the words and meaning that would fit with the charity. Then I thought of John Farnham’s ‘You’re The Voice’ and remembered how much I’ve always loved that song (handclap intro aside!)!”, says Wyatt.

“I ran the idea by my old friend Toby Jepson. Not only is he fantastic musician and producer but a great sounding board for ideas. He loved the idea! Within 48 hours Toby had secured a studio to record the track and then we got together and worked through all our friends and contacts to figure who we could arrange to appear on the track and who would actually be available. I figured I’d give myself one less instrument to worry about by myself playing drums… dealers choice 😉

‘You’re The Voice’ will be released digitally on Friday 6th December. It will be UK chart single linked so we can at least try and get a Top 40 single! There will be a VERY limited edition CD single available with a couple of alternative versions of the song. They will be £5 each and if you can find me you can get them from Friday November 22nd and throughout the Road To Rockstock. Anything left will be available at Rockstock and if anything remains after that they will go on the website, but when they are gone they are gone! All proceeds will go to Mind and I personally think the lyrics of the track are perfect for the cause.” – Wyatt Wendels

The Planet Rock All-stars band are:

Award-Winning ALICE COOPER Documentary To Make UK Premiere at Castle Cinema, Hackney And In Los Angeles at The W Hotel Hollywood in October 2019

Posted by tarjavirmakari on September 25, 2019
Posted in: Int. News, News. Tagged: Alice Cooper, ‘Live from the Astroturf. Leave a comment

‘Live from the Astroturf, Alice Cooper’ is part concert film, part documentary short highlighting the near incredulous story of how Alice Cooper super-fan Chris Penn, who runs a record store in Dallas, Texas, was able to coax the original lineup into reuniting at his store 41 years after they had disbanded.

Alice Cooper, the singer, went on as a solo artist in 1974, continuing to use the same name.  This reunion marked the longest set the original members had played since that time, and their first appearance together since being inducted into the Rock and Roll Hall of Fame in 2011.

Live from the Astroturf, Alice Cooper features a soundtrack mixed by Justin Cortelyou and the legendary Bob Ezrin, who is responsible for producing most of Alice Cooper’s output, including a string of eternal rock hits.  The performance was released on 7” and 12” colored vinyl as Record Store Day official releases. The 7”, which features the songs “I’m Eighteen” and “Is It My Body?” was reported to have been the fastest selling Record Store Day release of all time.

Alice Cooper rose to fame with original band members Michael Bruce, Glen Buxton, Dennis Dunaway, and Neal Smith in 1971 when their song “I’m Eighteen” ushered in an era of anthemic, rebellious rock music. The band became known as well for their stage theatrics, which included mock executions by hanging or beheading, signature makeup, and snakes. After Alice Cooper went solo, taking the name with him in 1974, the remaining band members continued making music. However, Cooper’s trajectory continued to outshine his former bandmates for decades.

The UK premiere will take place at the iconic and intimate Castle Cinema in Hackney, London, on Wednesday 09th October between 21:00 and 22:30. This date has been specially selected as it coincides with Alice Cooper being in the capital (he performs at the O2 Arena, Greenwich, the following night).  The event will be attended by super-fans, film crew and both past and present members of the Alice Cooper family. This will include Dennis Dunaway, former Alice Cooper bass player, who will also premiere his Rock Cinema Short, Cold, Cold Coffin. Cindy Smith Dunaway who created the band’s early glam look will also be in attendance. Ryan Roxie current lead guitarist for Alice Cooper who sat in for the late Glen Buxton at the event in 2015 as well as Chris Penn the man responsible for the reunion will be on hand to answer questions too.  Brian Cichocki director of Cold Cold Coffin will be making the trek to London also.

The Los Angeles premiere will occur October 14, 2019 8pm at the W Hotel Hollywood. There will be a Q+A with Michael Bruce, Dennis Dunaway, Cindy Dunaway, and Chris Penn moderated by Howie Pyro (Intoxica Radio/Danzig/D Generation) & Keith Morris (Author & Singer of OFF!/FLAG/Circle Jerks/Black Flag) post screening as well as an afterparty at The Viper Room where Michael and Dennis will sit in with the house band that evening.

The next day Live From The Astroturf, Alice Cooper the album is up for best Record Store Day packaging as a part of the Making Vinyl Hollywood Packaging Awards on October 15, 2019.  The album is also up for Grammy consideration voting from 9/25/19 until 10/10/19.

Watch the official lyric video for the song here:

»Old Lions Still Roar« will be released in various formats (Slipcase CD, Vinyl, digital) and is now available for pre-order from this location: http://nblast.de/PhilCampbellOLSR
The album will feature 2 different covers – a black and white one (CD Slipcase + digital) and a colored one (vinyl).