“We are really looking forward to this release. Doing a cover of such a legendary song was great fun and having Jacoby Shaddix as featuring artist is a big pleasure for us! We hope you like the song just as much as we do!”, Comments Apocalyptica’s Eicca Toppinen.

Produced by Howard Benson at West Valley Recording Studios in Woodland Hills, California and mixed by Chris Lorde-Alge, the all-time classic has been given a new interpretation by two significant rock artists of our time. The majestic musicianship of Apocalyptica combined with the powerhouse vocals of Jacoby Shaddix results in a super-charged, fresh, and exuberant rendition of the hit.

“so grateful to rock the classic Cream track ‘White Room’ with my friends Apocalyptica. I’ve been wanting to collaborate with them since the first time I saw them live back in 2010. These guys are a special breed of musicians. I can’t wait for the fans to hear what we have cooked up”

Fans will be able to hear this digital-only release via their favourite streaming or store outlets from March 5th at this location.

Following the postponement of tour dates due to the ongoing COVID-19 pandemic, Apocalyptica are excited to get back on road and bring their epic live performances to their fans. All tickets bought remain valid for the rescheduled dates and tickets remain on-sale; for all pre-sales, VIP packages, and ticketing details go to https://www.apocalyptica.com

It is with great regret, but obvious and necessary compliance, that APOCALYPTICA have to postpone their upcoming North American tour a second time to August/September 2021 due to the ongoing restrictions surrounding the COVID-19 pandemic. Please note that all tickets bought will remain valid for the rescheduled dates and tickets remain on-sale.

Apocalyptica’s performances will be comprised of new songs from Cell-0 as well as from the band’s rich catalogue. Lacuna Coil, who was scheduled to support on all North American dates, remain confirmed for the California, Oregon, Washington, Minnesota, Illinois and Canadian shows. Support on the remainder of the Tour is yet to be announced.

To keep the band’s fans and everyone else involved with the shows safe at this time, the shows have been postponed to the following dates. The Toronto show will now take place at “Rebel”. ALL PUCHASED TICKETS WILL BE VALID FOR THE NEW DATES:

The epic, storming power-metallic grooves of “Talk To Me” are the result of much mutual admiration and desire between both parties to create together. With both bands sharing an established history of camaraderie and similarities with regards to musical taste, a collaboration was always going to happen and at a time when everyone could do with some fresh, new, huge, epic, anthemic music, both bands agreed it was the appropriate moment to merge talents and release the track.

“After years of friendship we are more than happy to release a song together with the amazing Lzzy of Halestorm! This song has been in our minds for quite some time and we have been waiting for the right moment to finish it, and getting Lzzy to join us and perform in her outstanding way was a dream come true! We want to thank Lzzy and the whole Halestorm team for their great work and friendship.”

“Apocalyptica and I have for years talked about doing something together, and the last time I saw Eicca Toppinen, in Helsinki, Finland during the 2019 Tuska Festival, he brought up the idea that we finally make that talk a reality. I’m so excited for the world to hear this song! Thank you so much to the entire Apocalyptica camp for being a part of our family all these years and for including me in this project!” 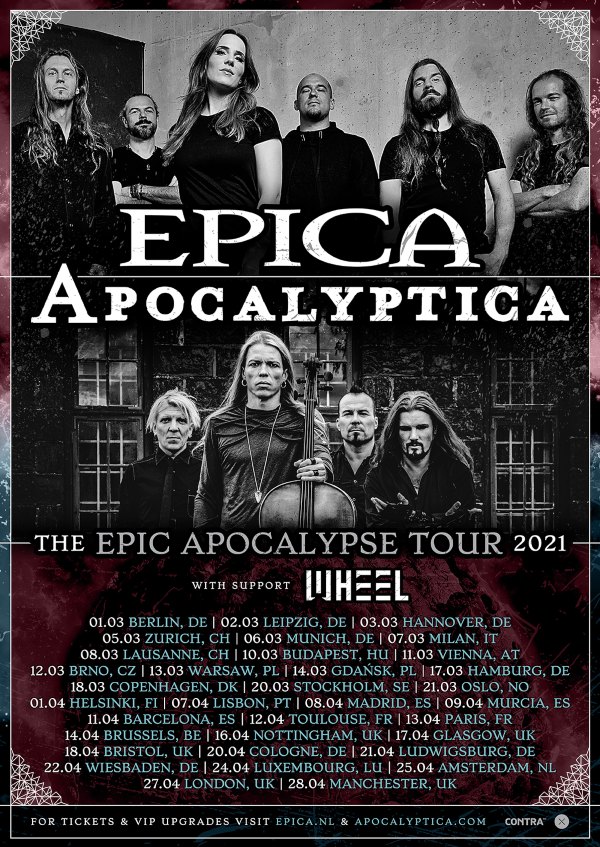 EPICA‘s Simone Simons comments: “As we were awaiting our tour with APOCALYPTICA with great anticipation, we are now forced to have a little bit more patience. This might not come as a surprise, as you have all seen our colleagues in the music business rescheduling their tours as well. We have decided that it is the best thing to do during these uncertain times. We want to give you the best possible experience and value your health deeply. We will be back full force and can’t wait to see all your faces again when you hear our new music live for the first time.  Everybody stay strong and be patient, your waiting will be worth while.”

EPICA will tour in support of their new album which will be released early next year. 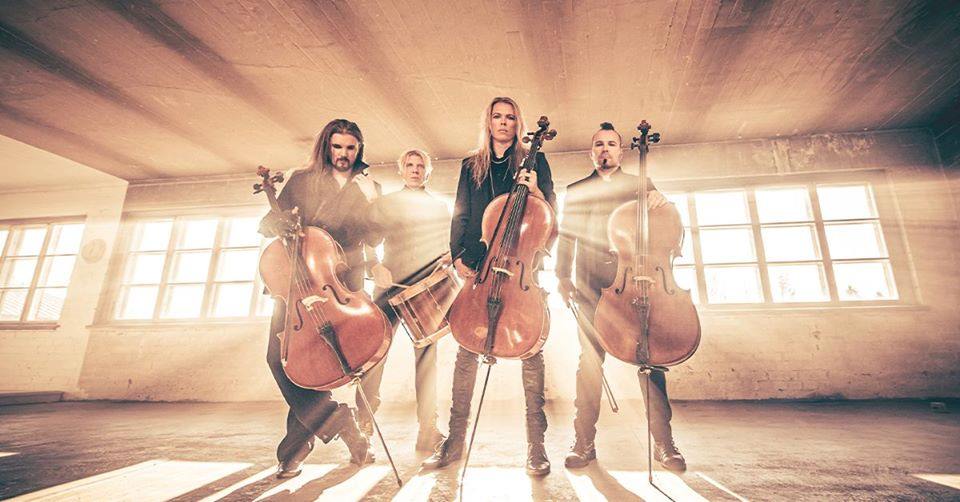 It is with great regret, but obvious and necessary compliance, that APOCALYPTICA have postponed their North American tour until Jan/Feb 2021 due to the COVID-19 pandemic. Please note that all tickets bought will remain valid for the rescheduled dates and tickets remain on-sale.

“These are uncharted waters for humanity – for the entire planet – and it is imperative that we do the right thing and take the right steps to ensure a return to the days we once took for granted. For us as a band, we hope that mankind may become more united and that we appreciate both our environment and each other more than ever before. We look forward to being able to see you all, and feel your wonderful communal energy intertwine with ours, early next year. In the meanwhile, please be good to each other, be good to yourselves, practice the healthy habits now needed more than ever, keep listening to music and…wash your hands. We will see each other when this is all over.”

To keep the band’s fans and everyone else involved with the shows safe at this time, the shows have been postponed to the following dates, ALL PUCHASED TICKETS WILL BE VALID FOR THE NEW DATES. 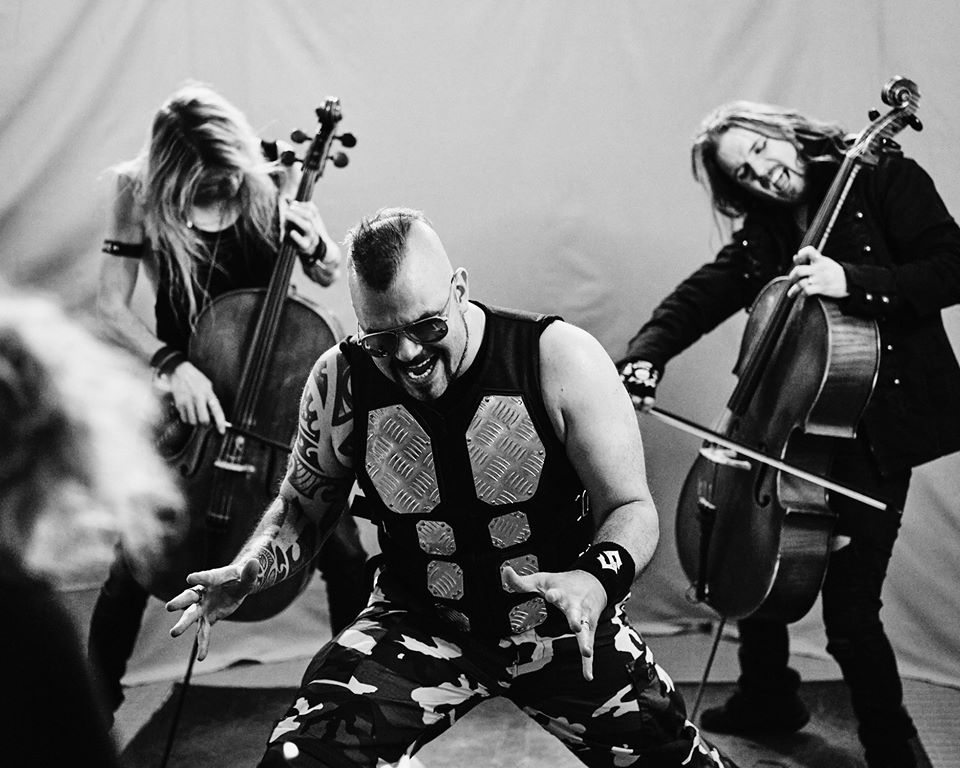 March 6, Finland’s multi-Platinum cello-rockers APOCALYPTICA released their brand-new track and music video, “Live Or Die (featuring Joakim Brodén)”. The song, which boasts what is certainly one of the most dynamic liaisons in heavy metal – the spellbinding music of Apocalyptica and the potent, iconic vocals of Sabaton’s Joakim Brodén – is a fierce battle cry focused on the desecration of our planet. “Live Or Die” was composed by Apocalyptica and recorded in Finland with Apocalyptica and Martin Hansen (Scorpions) producing. The video, directed by Ville Juurikkala and filmed in Berlin, Germany on January 25th, is a fiery performance piece that features Brodén on vocals.

Apocalyptica and Sabaton have a new but notable history of collaboration. Most recently, the two bands recorded a version of the 2010 Sabaton track “Angels Calling,” released in November 2019, with a companion music video. In addition, Apocalyptica was Special Guest on Sabaton’s just-concluded, critically acclaimed, 15-country European tour, that included Apocalyptica joining Sabaton onstage every night for a half dozen songs. As one UK reviewer wrote, “The chemistry between the two bands was absolutely incredible. Apocalyptica were throwing around their cellos just as hard as Sabaton were throwing around their guitars.”

In support of their current studio album release, the all-instrumental Cell-0, (Silver Lining Music), Apocalyptica – cellists Eicca Toppinen, Perttu Kivilaakso, and Paavo Lötjönen, and drummer Mikko Sirén – will kick off the first leg of their 2020 North American tour on May 3 in Orlando Florida. The band will bring their moving and bombastic live performances to 20 cities over a three-week period wrapping up on May 26 in Boston MA. With a set list that will likely vary night to night, Apocalyptica’s performances will be comprised of new songs from Cell-0 as well as from the band’s rich catalogue. Lacuna Coil will support on all North American dates.

Whilst Europe will enjoy one of the most engaging, exciting and “Apocalyepic” events of the year this coming Autumn 2020, when the cello metal giants Apocalyptica unite with Epica to entertain audiences all over the continent, from Budapest to Barcelona, on the Epic Apocalypse Tour. The two will co-headline, showing both a refreshing camaraderie and lack of ego, and will be joined by the exciting, progressive metal band Wheel, who will open each night with their engaging juxtapose of time-defying grooves and deep social exploration.

Tickets are on sale now, for all pre-sales, VIP packages, and ticketing details go to this location.

Apocalyptica’s upcoming and massive 2020 tour itinerary is as follows: