If the bedrock of progressive rock is to throw caution to the wind and to indulge your wildest musical flights of fancy, then Arjen Anthony Lucassen is a modern-day titan of the genre.

“It’s quite hard to choose an advance YouTube video for you from the Electric Castle Live release, I’m proud of the whole thing! Let’s go for one of the ‘Other Tales’ this time: Guilt Machine’s Twisted Coil. The band is just fantastic, and Damian will blow your mind! Especially the ending still gives me goose bumps every time. Step into the dark world of the Guilt Machine…”

Also watch the video for Garden of Emotion here:

On March 27 Music Theories Recordings/Mascot Label Group release ‘Ayreon – Electric Castle Live And Other Tales’, a 3 LP/2CD+DVD/BD set of last year’s spectacular live performance of the third Ayreon album ‘Into The Electric Castle’. Over four nights at Tilburg’s 013 venue (the scene of Lucassen’s Ayreon Universe series of live shows in 2017) Lucassen, his band and one of modern progressive music’s most emphatic of casts celebrated the 20th anniversary of ‘Into the Electric Castle’ in front of 12,000 adoring fans from 64 different countries who had flown in from around the world.

Tracklist:
CD1
1 Welcome to the New Dimension
2 Isis and Osiris
3 Amazing Flight
4 Time Beyond Time
5 The Decision Tree
6 Tunnel of Light
7 Across the Rainbow Bridge
8 The Garden of Emotions
9 Valley of the Queens
10 The Castle Hall
11 Tower of Hope
12 Cosmic Fusion

CD2
1 Robby Valentine
2 The Mirror Maze
3 Evil Devolution
4 The Two Gates
5 Forever of the Stars
6 Another Time, Another Space
7 Shores of India
8 Ashes
9 Out in the Real World
10 Twisted Coil
11 Kayleigh
12 Pink Beatles in a Purple Zeppelin
13 Songs of the Ocean

If the bedrock of progressive rock is to throw caution to the wind and to indulge your wildest musical flights of fancy, then Arjen Anthony Lucassen is a modern-day titan of the genre.

On March 27 Music Theories Recordings/Mascot Label Group release ‘Ayreon – Electric Castle Live And Other Tales’, a 3 LP/2CD+DVD/BR set of last year’s spectacular live performance of the third Ayreon album ‘Into The Electric Castle’. Over four nights at Tilburg’s 013 venue (the scene of Lucassen’s Ayreon Universe series of live shows in 2017) Lucassen, his band and one of modern progressive music’s most emphatic of casts celebrated the 20th anniversary of ‘Into the Electric Castle’ in front of 12,000 adoring fans from 64 different countries who had flown in from around the world.

“Because it was the 20th anniversary of the album, and we’d just remixed and re-released it, we figured it was the perfect moment to perform this live”, says Lucassen. “The Ayreon Universe shows were such a fantastic experience for everyone involved, and I’d had loads of requests for more live shows, so we decided to perform the entire ‘Electric Castle’ album back at the 013, and also play one track from each of my side projects billed as ‘Other Tales’.”

Watch the video for Garden of Emotion here:

Released in 1998, ‘Into The Electric Castle’ is your classic tale of an epic quest. Set in “no time and no space”, it tells the story of eight individuals who are guided by a mysterious voice and tasked with finding the mysterious Electric Castle. The original album features amongst others Fish (the Highlander), Lucassen (the Hippie), Edwin Balogh (The Roman), Anneke van Giersbergen (the Egyptian), Damian Wilson (the Knight) and Edward Reekers (the Futureman), all of whom repeated their performances for the live spectacular.

Having set out his stall with the first two Ayreon albums ‘The Final Experiment’ (1995) and ‘Actual Fantasy’ (1996), as a creator of vivid musical works built around some of the finest talent in the prog and rock worlds, everything seemed to align perfectly with 1998’s ‘Into The Electric Castle’.

“I poured my heart and soul into it”, says Lucassen of the original album. “Investing everything I had both financially and creatively, and enlisted the best instrumentalists and singers I could find in the world at that time. When making the album I was unconstrained  by any musical or stylistic boundaries and incorporated many of my favourite musical styles. ‘Into The Electric Castle’ received an overwhelmingly positive reception from both the press and the fans. This firmly established the Ayreon name, making Ayreon the perfect project to pour all of my time and creative energy into.”

Although best known as a studio-based musician, Lucassen slowly countered his fear of performing live when he first joined long-time collaborator Anneke van Giersbergen for some live dates in 2015, before tackling the more elaborate theatre staging of his 2004 Ayreon album ‘The Human Equation’ in Rotterdam over four nights the same year (on which he served as special advisor). He went even further in 2017 when he appeared on stage with his star-studded ‘Ayreon Universe’ shows at Tilburg’s 013.

“I get absolutely crippling stage fright”, he says. “Up to the night before the Tilburg shows, I was having dreadful panic attacks. But it’s all for a good cause!”

Creating a live show for ‘Into The Electric Castle’ seemed like the logical next step, and the four 2019 shows were a resounding success, captured for posperity in ‘Ayreon – Electric Castle Live and Other Stories’. In fact, it all went so well, that Lucassen is taking the show to headline the prestigious German progressive rock festival Night Of The Prog in June of this year.

“I just love recording my various projects in the studio,” he concurs, “but I’m not a live performer. I’m the guy who comes up with the ideas, sees the big picture, and puts it all together. So I’m glad that so many incredible musicians helped me bring my music to the stage.”

Interview With ARJEN ANTHONY LUCASSEN: “Ritchie inspired me to pick up the guitar” 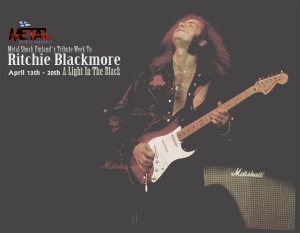 As part of our Tribute To Ritchie Blackmore week, we have invited well known names in the world of rock and metal to share their thoughts about Ritchie.The next in the series is Dutch composer, vocalist and multi-instrumentalist, as well as the man behind AYREON,  Arjen Anthony Lucassen. Arjen has worked with many musicians and has released many albums, the current one “The Theory Of Everything” in 2013.

To discover Arjen‘s thoughts on Ritchie, please read below:

Hi Arjen and welcome to Metal Shock Finland and our Ritchie Blackmore Tribute. How are you?

What are you doing at the moment, any plans for this year?

I‘m working on a new project, but it’s too early to talk about it. It won’t be released this year, but definitely early next year. More news soon, I promise!

What are your thoughts on Ritchie?

Ritchie is in my top three favorite guitar players of all time. Great timing, sound and note choices. Besides that he’s one of my favorite songwriters as well.

Do you think rock and metal music would be different today if Ritchie hadn’t picked up a guitar?

Oh yes, absolutely! I know for sure that my music would sound different. He inspired me to pick up the guitar. I saw him live many times. I even caught a piece of one of his smashed Stratocasters!

As a musician, what do you feel you have learned from him?

How to combine power with melody, rock with classical music and throw in some medieval folk. He also taught me how to choose the best singers and musicians like Dio and Cozy Powell.

What is your favourite work by Ritchie and why?

Definitely the first three Rainbow albums, and Stargazer in particular. That is the best song ever written and performed.

Thanks a lot for your time Arjen and for contributing to this special week! 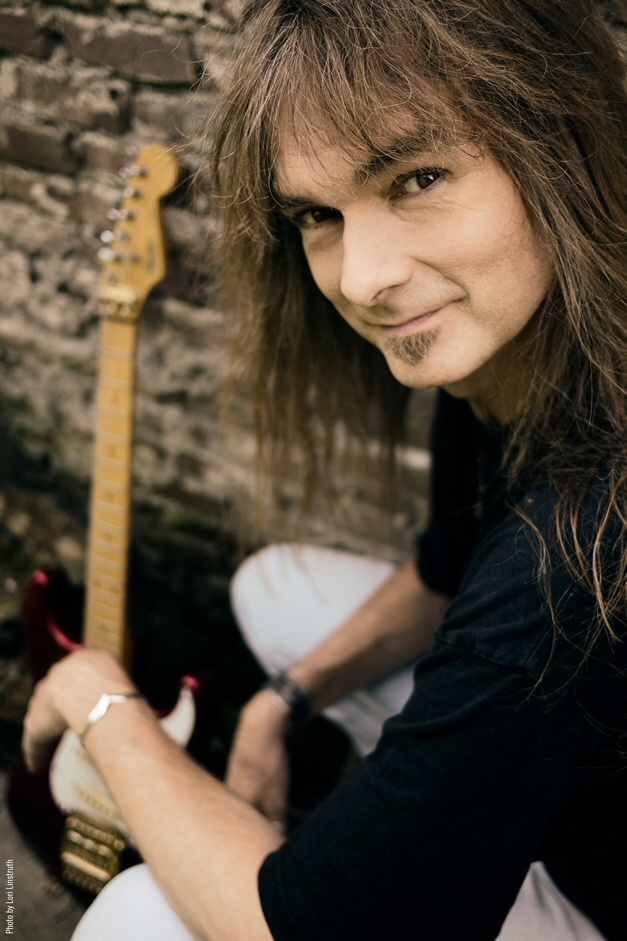 AYREON: Guide Vocal Version Of The Theory Of Everything Songs Sent To Singers Uploaded

Posted by tarjavirmakari on December 19, 2013
Posted in: Int. News. Tagged: Arjen Anthony Lucassen, Ayreon, The Theory Of Everything. Leave a comment

AYREON mainman Arjen Lucassen has uploaded guide vocal versions of ‘Phase 1: Singularity’, ‘Phase II: Symmetry’, ‘Phase III: Entanglement’, and ‘Phase IV: Unification’. These versions were sent to the singers who sang on their latest album, The Theory Of Everything, which was released October 28th on InsideOut Music. These versions are ones featuring Wilmer Waarbroek.

AYREON: The Theory Of Everything Trailer With DVD Interview Footage Posted Online

Posted by tarjavirmakari on November 15, 2013
Posted in: Int. News. Tagged: Arjen Anthony Lucassen, Ayreon, The Theory Of Everything. Leave a comment

InsideOutMusicTV has posted online a new trailer for AYREON‘s new Album “The Theory Of Everything”, including interview footage from the DVD, check it out below. The album came out on October 28th, via InsideOut Music. Order now: http://smarturl.it/ayreonIOM

Also check out HERE the recent chat which Tarja Virmakari had with Arjen Lucassen.

Audio Interview: AYREON Mastermind Arjen Lucassen Talks About ‘The Theory Of Everything’ And Its Completely Revamped Conceptual Universe

Posted by tarjavirmakari on November 14, 2013
Posted in: Int. News, Interviews. Tagged: Arjen Anthony Lucassen, Ayreon, The Theory Of Everything. 1 Comment

AYREON is the flagship musical project by Dutch composer and multi-instrumentalist Arjen Anthony Lucassen. The musical style of Ayreon draws mainly from heavy metal and progressive rock, but also incorporates aspects of other genres such as folk, classical and electronica, resulting in the unique “Ayreon sound”. The new album, The Theory Of Everything” came out on October 28th, via Inside Out Music, and it has already gained Album Chart entries in many countries worldwide.

Just a couple of days ago Tarja Virmakari had a chance to have a long and interesting chat with Arjen. He spoke about a completely revamped conceptual universe for Ayreon. Gone are the complicated story lines featuring sci-fi, aliens and time-travel; in their place is a real-world drama set in the here and now. Arjen told also about the inspirations he had while creating this masterpiece of four epic tracks, divided in 42 segments, which is the Answer to the Ultimate Question of Life, the Universe, and Everything in The Hitchhiker’s Guide to the Galaxy… but Tarja and Arjen talked also about many other Album details too, so please join to the conversation here below.