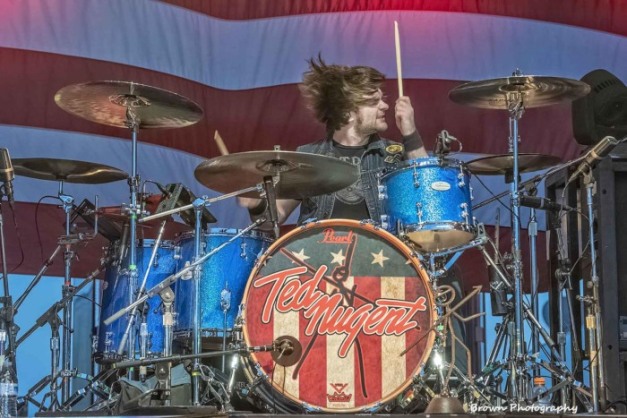 Hard work and dedication is being recognized by members of KISS, STYX, Cheap Trick, Ringo Starr Band, Alice Cooper Band, Blue Oyster Cult, Queensryche, Mountain, Manowar, Ace Frehley Band, Warrant, Sponge, Cavo and Ted Nugent, to name just a few. These rock talents along with other music legends, entertainment industry professionals and NHL players joined in to create a congratulatory video for one of the world’s hottest up-and-coming drummers for his college graduation from the prestigious Berklee College of Music, which was cancelled due to the COVID 19 Pandemic.

The rising star that is touring/session drumming phenom Jason Hartless (Ted Nugent, Joe Lynn Turner, Mitch Ryder) had just graduated this past May in 2020 from Berklee College of Music in Boston, MA, with his Bachelor’s degree in Entertainment Business. His commencement ceremony was unfortunately cancelled with no reschedule date and with the Nugent summer tour moved until 2021, it was a depressing time for the young quarantined drummer.

When word spread throughout the entertainment industry, many jumped at the chance to wish their young friend a very happy graduation and to extend well wishes, as well as praise him on completing college while touring and recording almost non-stop. Jason’s drum-tech, Randy Walker, along with his parents, collected the videos and then edited them together for a social media graduation celebration that was over one hour long. Attached is the condensed version. After viewing the video Jason simply said, “I have the greatest job in the world!”

Jason is continuing his education at Berklee College of Music to complete his Master’s Degree in Business and is also looking forward to touring and sessions as soon as the pandemic is over.

Berkleemusic.com, the online school of Boston’s renowned Berklee College of Music, is launching Rock History, an online course that chronicles the evolution of one of the greatest periods of music. Rock History takes an-depth look at the highs and lows of rock over the past 60 years; the key heroes and villains, the movers and shakers from the studio and the concert stage, and a behind-the-scenes look at the managers, industry executives, promoters, and cultural trends that shaped it. The course launches April 2.

Berkleemusic has tapped journalist Steve Morse (not to be confused with the DEEP PURPLE guitarist) to author and teach Rock History. Morse brings a lifetime of real-world experience to the material. Steve was the senior rock writer at the Boston Globe for over three decades, and has contributed to other top-tier press outlets such as Billboard and Rolling Stone. He has also served on the nominating committee of the Rock And Roll Hall Of Fame. Steve has a rich background in rock history, having interviewed and developed strong, decades-long ties with dozens of the most important artists and bands in rock, including THE ROLLING STONES (first seeing them in 1966), U2, PAUL MCCARTNEY, AEROSMITH, AC/DC, Bruce Springsteen, Bob Marley, METALLICA, Joni Mitchell, Eric Clapton, PEARL JAM, STEVIE WONDER, COLDPLAY, Tom Petty, and many more.

“The new Rock History online course from Berklee is a comprehensive, interactive, and immersive way to experience the most important and interesting time ever in the music industry,” says Dave Kusek, CEO at Berkleemusic.com. “Steve Morse has such a wealth of knowledge and insight into what actually happened behind the scenes and the way the course is crafted, it is simply the most unique and exciting way to learn about this incredible time in the history of music. You will not find a better way to learn about and appreciate the classic albums and live shows that were created by the true legends of rock and roll, as the music industry ignited.”

Throughout the course, students will view exclusive, never-before-seen Berkleemusic video interviews with rock luminaries including: Joe Perry of AEROSMITH; Bob Weir of the GRATEFUL DEAD; Mike Mills of R.E.M.; Ernie Isley of the ISLEY BROTHERS; George Clinton of P-FUNK; producer Jack Douglas (who has worked with AEROSMITH, Patti Smith, and John Lennon); promoter Don Law; Amanda Palmer; Hugo Burnham of GANG OF FOUR; Duke Levine (who has played with the J. GEILS BAND and Aimee Mann); and English super-session drummer Dave Mattacks. Berkleemusic has also partnered with Wolfgang’s Vault to provide additional rare audio, video, and other forms of historical rock media presented in an educational context for the very first time.

“I have known Steve Morse for over twenty years,” concludes AEROSMITH‘s Joe Perry. “Steve is a musicologist and his love of music makes him a very enthusiastic teacher. Steve has an undying love of music and a proven ability to be one of music’s finest critics and writers.”

Berkleemusic will host a free live Rock History event in Berkleemusic‘s studio Thursday, March 8 at 4:00 p.m. EST: an exclusive conversation between Rock History‘s Morse, and Boston DJ John Laurenti. Laurenti joins Morse in the Pantheon of the Boston music scene. John is a DJ at Boston’s #1 classic rock station in Boston, WZLX is the music director at University of Massachusetts’ radio station, WUMB. Laurenti has also hosted a number of historical music documentaries shown on WGBH in Boston.

For more information, go to this location. Source: Blabbermouth.net