IN FLAMES: Peter Iwers and Björn Gelotte To Release Book “2112 – A tale of Meat and Metal”

IN FLAMES have announced, via their Official Facebook Page, that Peter Iwers and Björn Gelotte are to release a book “2112 – A tale of Meat and Metal”. The book will contain loads of interesting stories from not only Pete and Björn, but also friends of theirs such as Kerry King, Peter Stormare amongst others. The Scandinavian release of Restaurant 2112 – A Tale of Meat and Metal” is set for May 30th. Edition in English will be available sometime in June.

For more information, check out: https://www.facebook.com/Restaurant2112aTaleOfMeatAndMetal

Also check out: HERE and HERE.

Posted by tarjavirmakari on February 18, 2012
Posted in: News. Tagged: Björn Gelotte, In Flames. Leave a comment

On January 30, Jason Saulnier of the MusicLegends.ca web site conducted an interview with guitarist Björn Gelotte of Swedish metallers IN FLAMES. You can now listen to the chat in the YouTube clip below. Source: Blabbermouth.net

IN FLAMES Guitarist Björn Gelotte – “Music For Us Is Dead Serious, But You Should Be Able To Laugh Around It”

Posted by Stargazer on October 23, 2011
Posted in: News. Tagged: Björn Gelotte, In Flames. Leave a comment

Jenna Williams at TheScreamQueen.com recently caught up with IN FLAMES guitarist Björn Gelotte. An excerpt from the interview is available below:

JW: When you’re writing an album, or recording, how do you really try to incorporate some of that energy that you get from doing a live show into the album?

Gelotte: “I think the important thing is to find the right dynamics in the song because you can’t keep all that energy up. I mean, in the music; it’s not like we’re running around doing back flips and stuff like that. But it’s within the music and that comes through good arrangements, I think, or really well thought through arrangements and dynamics of the song, and of course to add some hooks in there, melodies that people remember, that helps too.”

Gelotte: “Yeah, exactly! And trying to invite the audience up on stage, basically. I mean, in a mental sense, you know? I think that’s important, and it gives us the most pleasure if we manage to do that in a proper way because that gives so much back.”

JW: As you said, you try to invite the audience on stage, how do you do that exactly, or how does that happen?

Gelotte: “We love what we do, we really do. And that’s why there’s always huge smiles on our faces when we play. Music for us is dead serious. But you should be able to have the (inaudible) in the eye or whatever. You should be able laugh around it, have a good time. I think that shows up and that’s one way of inviting people. And also not trying to be behind, like I am right now, sunglasses or a huge image or something. We’ve never had that. And we kind of focus more on the music than looks, you know?”

Go to this location for the complete interview. Check out BW&BK’s interview with Gelotte and In Flames frontman Anders Friden here.

Sounds Of A Playground Fading is out now. The tracklist is as follows:

Posted by tarjavirmakari on May 10, 2011
Posted in: News. Tagged: Björn Gelotte, In Flames, Sounds of a Playground Fading, talks about new album. 1 Comment

A brand new song from Swedish metallers IN FLAMES was premiered during this past weekend’s (May 6-8) edition of Full Metal Jackie‘s nationally syndicated radio show. The band’s guitarist, Björn Gelotte, was also interviewed on the program.

When asked whether the departure of founding guitarist Jesper Strömblad (who quit the band in February 2010 in order to continue receiving treatment for his alcohol addiction) affected the direction of IN FLAMES‘ new material, Gelotte replied, “I wouldn’t say that [it changed] the direction at all, actually. We sort of formed and shaped and pulled this band into what it is right now and we’re still pulling in the same direction. But it did a lot with the chemistry within the band and also a little bit about how we approached the writing of [the new IN FLAMES] album [‘Sounds Of A Playground Fading’]. I did all the music, but I had a lot of help from my friends; it was more of a collaboration with the other guys, especially when it comes to arrangements. But also, really early, we decided to give vocals a little bit more space [this time around], because that’s something that we always [waited until] the last week of the recording as well — now we’ve got a week to do the vocals — and that’s not really fair. That was an interesting new way of writing the music, keeping vocals in the focus than we had in the past. The dynamics right now are slightly different. I had Jesper with me all the time, or Jesper had me with him all the time, so it was really easy to finish songs really quickly, and this time I had to work a little bit harder for it, but it feels really good having done it.”

Regarding IN FLAMES‘ new single, “Deliver Us”, Gelotte said, “It’s not a very fast song, but it’s very melodic and it’s got a really powerful chorus. And as a guitar player, I am kind of proud to say I love the solo on this one. It was not very hard [to play], but it’s a nice thing. It’s a… I don’t know what you would call it… icing on the cake.”

To see a full list of stations carrying Full Metal Jackie‘s nationally syndicated radio show and when it airs, go to FullMetalJackieRadio.com

A 30-second audio sample of “Deliver Us” can be streamed at Amazon.com. The “Deliver Us” digital single will be released via Century Media Records on the following dates:

“Sounds Of A Playground Fading”, the tenth album from IN FLAMES, will be released via Century Media Records on the following dates:

13 songs were laid down for the CD, which was recorded at the band’s IF Studios in Gothenburg with engineer Roberto Laghi (HARDCORE SUPERSTAR, LOK, SONIC SYNDICATE).

The cover artwork was created by Dave Correia.

In an interview with the Swedish tabloid Aftonbladet, IN FLAMES vocalist Anders Fridén, 38, revealed that “Sounds Of A Playground Fading” will almost certainly challenge the band’s fans’ musical expectations.

“We have some songs that pretty much go against the hard rock formula,” he said. “There’s a song called ‘The Attic’ where we have an accordion playing the chorus instead of me singing it. Another song begins with a spoken-word part that evolves into a kind of hard DEPECHE MODE-type thing. We also have some really fast, typical IN FLAMES tunes.

He added, “We’ve never denied where we come from, but at the same time we like to challenge our listeners.”

Fridén also talked about the often dark lyrical content on “Sounds Of A Playground Fading”.

“Some people I know have passed away, and then you have kids being born,” he explained. “I’ve got two kids myself and, of course, it has affected the songwriting. Suddenly you’re not alone anymore.” 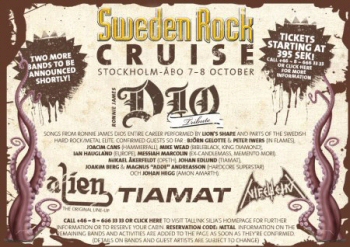 Some of Sweden’s finest heavy metal musicians gathered to pay tribute to Ronnie James Dio during this fall’s edition of the Sweden Rock Cruise, which sailed on October 7, 2010 from Stockholm, Sweden for Åbo, Finland and returned the following day. There was a long tribute concert with a number of guest musicians performing classic songs from Dio’s career with a main band consisting of members of Lion’s Share.

The following artists were scheduled to perform with LION’S SHARE at the event: