GLENN HUGHES, the former bassist and singer of DEEP PURPLE, known to millions as the ‘Voice of Rock’, Rock and Roll Hall of Fame inductee, and the current front man for rock super group Black Country Communion, is pleased to announce that he will be performing Deep Purple only material with his “GLENN HUGHES PERFORMS CLASSIC DEEP PURPLE LIVE” nationwide UK tour in October 2018.

The nine date tour promises to be a dynamic, turn-back-the-clocks, two-hour live extravaganza homage to his tenure in MK 3 and MK 4 incarnations of Deep Purple – one of music history’s most seminal and influential rock and roll groups. All tickets are priced £27.50 (£30.00).

Planet Rock will launch a 48-hour ticket pre-sale on Wednesday 21ST February from http://www.planetrock.com. Tickets will then go on general sale on Friday 23rd February from the 24 HR ticket hotline 08444 780 898 or http://www.thegigcartel.com.

“I’m excited to be touring the “Classic Deep Purple Live” in the UK this October. I first toured Classic Deep Purple Live in Australia and New Zealand last year and it went down like a storm. We’re also touring the show throughout South America in April, and festivals throughout the summer. By the time we tour the UK in October, we’ll be on fire.” 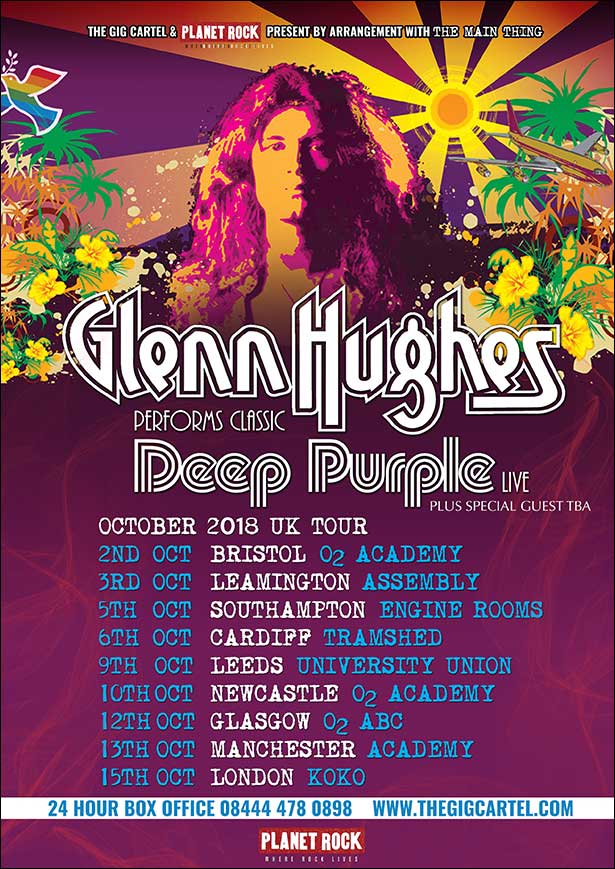 The song represents a subject very close to the heart of Glenn Hughes as he explains. “Joe captured the mood brilliantly on this song. I’m still shaking my head in astonishment. I wanted to write a song about my love for dolphins. Each year thousands of these beautiful Souls are murdered by Hunters in the coastal town of Taiji Japan. They are drove into the Killing Cove and brutally slaughtered. I have been working with Ric O’Barry from the Dolphin Project for four years, and told him I had written a song about this senseless & horrific scenario for BCCIV, that has been happening for decades.”

‘I wrote this song for my Dad on the flight back to the UK for his Memorial Service. When I went to record it, my Mom had also just passed away. So I sang it for the both of them. I was installed with a greater sense of gratitude. I used a mid-falsetto vocal on the chorus to add sensitivity to the melody that I had written. The content is quite simple. When the last breath is taken only love remains’

Just like its three predecessors, ‘BCCIV’ was overseen by Kevin Shirley, whose catalogue of hit records for Led Zeppelin, Iron Maiden, Aerosmith, Journey, The Black Crowes, has made him the hottest producer that rock music has to offer. Shirley, who originally had the idea of putting Hughes and Bonamassa in a band after seeing them jamming together onstage in Los Angeles back in November 2009 – is the group’s unofficial ‘fifth member’.

To coincide with today’s 48-hour Planet Rock pre-sale for their exclusive UK tour dates, BLACK COUNTRY COMMUNION have premiered the official music video for their first single “Collide” taken from their brand new album “BCCIV”, which is released on Friday 22nd September.

Watch and Embed the official music video for “Collide” here:

These will be the only two concerts the band will play in the UK and Europe. Planet Rock’s 48-hour ticket pre-sale runs from Wednesday 2nd August until Thursday 3rd August via http://www.planetrock.com.

Tickets go on sale to the general public on Friday 4th August from 0844 844 0444 and can be booked online from http://www.ticketmaster.co.uk and http://www.eventim.co.uk.