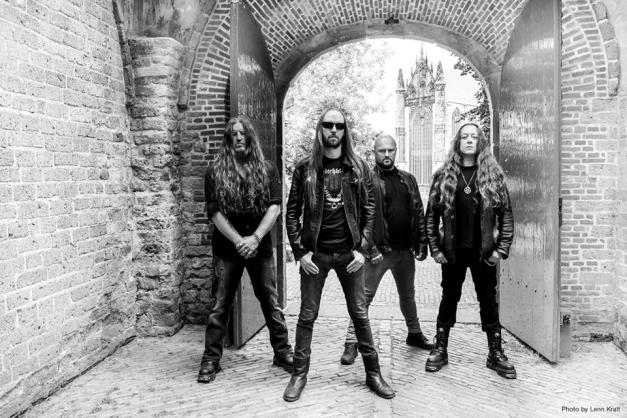 Here is a statement by SOULBURN: ”Bob Bagchus decided to call it quits and parted ways with SOULBURN. It came a bit as a surprise, but we totally respect his decision and wish him all the luck with his other musical and hellish endeavours. We thank Bob for all the effort he put into this band from the start on, and also simply for being this amazing legendary guy he is. Onwards!

Bob Bagchus added: “A little musical update from my side: I recently decided to leave SOULBURN. There is no “big” story behind it or any of that blablabla, I just thought it was time to quit since I did not feel connected with it anymore. I wish the guys all the best in the near future and welcome their new drummer Marc Verhaar. Thanx Eric, Remco and Twan for the great times and praise the Goat!“

SOULBURN consequently added Marc Verhaar (Graceless, Nailgun Massacre, ex-Xenomorph) as new drummer to the fold. SOULBURN commented: “He’s no stranger to the SOULBURN camp as he was often present helping out at our shows. He’s a great guy and above all, a more than great drummer and we’re very much looking forward continuing our blasphemous noise together. A new era has arrived…“

Most recently, SOULBURN have released a 7” EP entitled “Carpe Noctem“ featuring two brand-new songs via Floga Records, who had previously also re-issued the group‘s 1996 demo on 12“ vinyl in 2016. Currently, SOULBURN are working on their upcoming fourth album and will also be playing selected shows throughout 2019. Here are the dates announced so far:

SOULBURN have last released their album “Earthless Pagan Spirit”, whichwas recorded in The Netherlands at Harrow Studio as well as Double Noise Studio and then mixed and mastered by Magnus “Devo” Andersson at Endarker Studio in Sweden (Marduk, Ofermod, etc.), via Century Media Records in 2016.

Check out some samples for SOULBURN’s “Earthless Pagan Spirit” here:

“Where Splendid Corpses Are Towering Towards The Sun” (album track): https://youtu.be/fFuFsBSWMak

Originally SOULBURN emerged after a first demise of Dutch death metal legend Asphyx in the mid 90’s, when founding members Eric Daniels (guitars) and Bob Bagchus (drums) looked for a seperate outlet to unleash their mutual obsession with Bathory, Venom and Celtic Frost. After a demo and the cult “Feeding On Angels” debut album via Century Media Records in 1998, which featured Wannes Gubbels (Pentacle) on vocals/bass, SOULBURN were put to rest when Asphyx returned with “On The Wings Of Inferno” (2000) with the same line-up. SOULBURN was dead, buried, but not forgotten…as they resurfaced 16 years later for the release of their sophomore album “The Suffocating Darkness” in 2014 and its follow-up “Earthless Pagan Spirit” in 2016. SOULBURN’s line-up currently consist of guitarist and founding member Eric Daniels (ex Asphyx),  vocalist/bassist Twan van Geel (Flesh Made Sin, Legion Of The Damned), second guitarist Remco Kreft (Grand Supreme Blood Court, Nailgun Massacre, Xenomorph) and new drummer Marc Verhaar (Graceless, Nailgun Massacre, ex-Xenomorph).